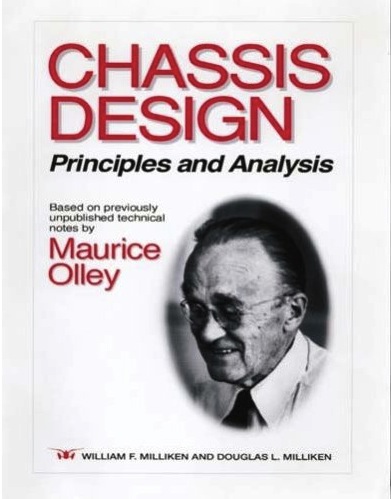 This important book has a very special place, for the vast majority of the material has been taken directly from the previously unpublished writings of Maurice Olley. The book begins with Olley’s reminiscences, the closest Maurice Olley came to writing an autobiography.

Olley (1889-1972) was born in Yorkshire England, grew up on the great Holyhead Road running through Wales. He describes his early impressions of the time when England was dominated by the steam engine. The idea of internal combustion took hold in France and Germany more quickly than in England, where its first general acceptance was as power for motorcycles. Still, young Olley developed a lifelong passion for the motorcar and had that goal firmly in mind during his educational years. After schooling, his first real job was in France for Henry Royce as a tool designer. His life would be devoted to automobiles, first with Rolls-Royce both in England and Springfield, Massachusetts, and finally with General Motors where he rose to head Chevrolet Research and Development. After retirement in the early 1960s, Olley wrote a series of monographs, covering his life’s work in the field of chassis design.

By the late ’60s the material was well on the way to publication when a very tight lid was suddenly placed on the project by GM’s legal staff, in view of the enormous litigation issues then raging around the “Corvair affair”. We owe the father, Bill and son, Doug, team of authors of this book a great debt of gratitude that finally, after more than thirty years under wraps, they gained permission to publish Olley’s monographs. Bill and Maurice had first met in 1952 and maintained a close personal and technical relationship for the balance of Olley’s life.

Keeping in mind the genesis and purpose of the book, it is probably best to think of it as a textbook. Olley wrote his notes for peers, for practicing engineers; he presupposes familiarity with principles and jargon. Almost every page is filled with geometric diagrams, illustrations, and mathematical progressions. Front and rear endpapers contain the symbols used throughout the work in developing the mathematical solutions. It is a true look into the world of automotive suspension design and despite the enormous body of data presented, the book is honest in its conclusion that even with all that has become understood and quantified, the subject remains probably the most complex field in automotive engineering. Even today, just as with new aviation products, much of the design effort in automotive suspensions can only be carried out during actual testing.

This work, with a textbook appearance, could indeed be adopted in that supporting role as any new student of automotive chassis design would do well to start his or her education with an appreciation and understanding of how suspension systems have reached their present development and I cannot imagine a better source than this single book. As the authors point out, today much of the mathematical effort, and even some of the qualitative understanding, can be sidestepped by solving chassis problems (suspension linkage for example) using one of the computer programs now available. But blind reliance upon a computer program can, and has, produced gross and expensive errors. I should think that the serious student of chassis design would insist upon first working his way through the graphical approach used by Maurice Olley, developed at a time when the only computing aid at his disposal consisted of the logarithmic scales on his slide rule.

Although the book is aimed at engineers, it is still recommended reading for the rest of us who neither aspire to a future in automotive engineering (some among us have long since developed a gentle, but realistic appreciation of our personal limitations), nor wish to run through the mathematical equations just for the fun of it. It is perfectly legitimate to scan over the more difficult mathematics, accepting that they are correct as written, and instead focus one’s attention on the diagrams/illustrations and the qualitative conclusions, each of which are skillfully explained.

Of particular value is the sweeping nature of Olley’s writing. He first started serious suspension experiments at GM in 1930, and includes those early efforts in his writing. During the mid-1920s a serious problem with front wheel shimmy had been studied by W A Robotham at Rolls-Royce using a bump rig. From about 1911 Rolls-Royce had always tested every chassis on a dynamometer by setting the rear wheels on four-foot steel drums. Later the same idea was used for chassis fatigue testing by using an automobile engine to turn the drums, and this was the basis of the first bump rig. Maurice Olley took the idea with him to GM where he began his own test program, seeking solutions to front wheel shimmy and caster wobble. This was a time when virtually all automobiles being produced used solid front axles and leaf springs. The eventual result of Olley’s efforts was development of the so-called flat-ride at GM and adoption of independent front suspension in all GM products. The story of how that happened is explained in this book and it must be said that it was largely the effort of one man.

I can still remember my grandfather raving about the ride of those first Cadillacs to benefit from the change: “It’s like floating down the road, no matter whether you’re sitting in front or back.” Now at last I know how they achieved it and have also learned who was the driving force. Have you ever wondered why it is so superior to a fixed front axle? It is not just a matter of reducing the unsprung mass, as many believe. You will find so much information on the book’s 619 core pages, augmented with appendices, and almost none of it is redundant. Helpful too is, through out, the authors have included their commentary, in italics, helping the reader understand the concepts and adjusting for changes in modern SAE sign convention. Olley assumes an audience of engineers and does not explain some basic terms making the authors’ notes particularly helpful, plus they include additional information at the end of each section as well as in appendices.

One cannot come away from this book without having gained a greater appreciation of the subject, plus great respect for Maurice Olley, one of the original pioneers in chassis design, and for the authors as well, who carry on in that tradition today at their Milliken Research Associates.

Copyright 2009 (speedreaders.info) Edited and adapted with permission from review by James Pate, originally published in the July/August 2002 issue ofThe Flying Lady, the periodical of the Rolls-Royce Owners Club (RROC/USA)
(Reviewer Pate, an engineer with a decades-long career as a commercial pilot, is now working on classic cars in his retirement.)

Posted Under: Automobiles, Racing, Rally, Technology | Author: Other | No comments yet

Jupiter’s Travels: Four Years Around the World on a Triumph »
« Bentley “Old Number One”