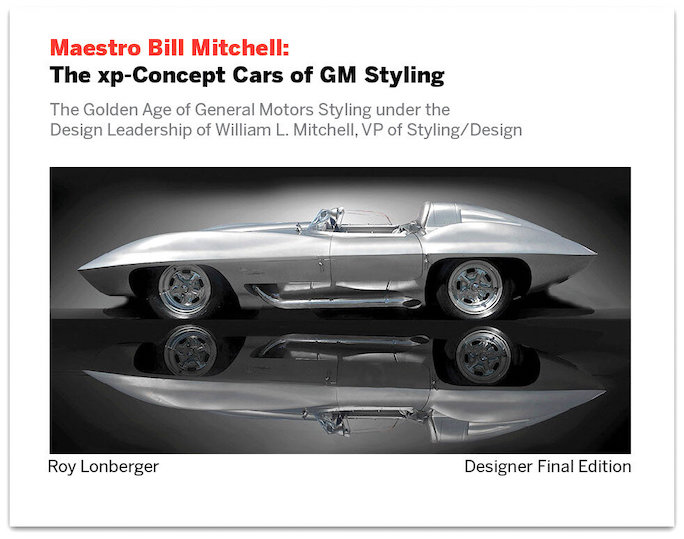 “Flamboyant, egocentric, direct, passionate, abusive. Love him or hate him, he was a force to be reckoned with. He suffered fools rarely. Not for the meek or thin-skinned, either you were with him or you did not exist. He scared the living hell out of you if he disagreed with your work, but he would shower you with perks if you showed that you loved cars as much as he did.”

Sure, heaps of words have been spilled about GM’s 1958–1977 Design Chief so why add more? The author of this book makes an obvious and incontrovertible point: most were written by people who didn’t know the man, let alone worked with/for him. And even among the latter, Lonberger finds, “almost everyone with whom I spoke had a different point of view of Mitchell.”

That one person should be different things to different people—whether they are the personification of calm like the Dalai Lama or a mercurial tyrant like Steve Jobs—would surprise only the naïve. As Head Designer in Mitchell’s secret Studio-X during an incredibly fertile period in car design, the mid-1960s, Lonberger can offer the ultimate insider’s view. That it is wholly sympathetic is not sycophancy or hero worship but Lonberger’s acceptance of the notion that praise/criticism, good/bad, strong/weak each have their place and time. And that you can’t make an omelet without breaking eggs.

In 2011 Lonberger was invited by former Head of Cadillac Exterior Design John Manoogian to be interviewed at the GM Heritage Center. That interview ended with the words, “Maybe I will write a book.” This is that book.

Even the shopping cart looks wildly futuristic—or is it a custom accessory that comes with the car?? But the limited opening of that rear hatch is clearly a form-over-function abberation.

Let’s start with a PSA of sorts, to keep things sorted especially for readers of the future who may search for it on the secondary market one day: a book/set of books by this author about this subject has existed since 2015 in various permutations (the first one came to six volumes; see footnote 1) Each version is, or at least is intended to be an improvement over its predecessor, this being the result of the author’s evolving thinking about how best to do justice to his subject, advance the body of knowledge, and offer the reader the most ideal book (in terms of scope and production values) for the most appropriate price. Few authors, even or especially if they self-publish, have the means—or the commitment—to tweak the product and the process to the degree Lonberger has and produce exceedingly limited runs of fully fleshed out books just to “test” the waters and then go back to the drawing board. (Digital, on-demand printing is a powerful tool in that regard.) Long story short, the version we are reviewing here is labeled “Designer Final Edition”—self explanatory. Well, there is a caveat: we are looking at a work-in-progress version where concept and structure are finalized but actual page layout or typography may still be tweaked.

The mid-engine Corvette is the newest of the new, except—it was on somebody’s brain already fifty years ago!

So, to the book proper at last. It deals, principally, with the period between the Stingray and the AeroVette (1958–1977). To thread the needle, Lonberger sketches out his own upbringing and background. Imagine being a young boy setting his mind to becoming not only a car designer but specifically a GM designer—and ending up “working for God.”

The tone of the book is meant to resemble a conversation, which is even reflected in the physical layout of those pages that contain text: rather than run-on narrative there are key thoughts each self-contained within one column each with its own head (below).

The core topic is obviously Bill Mitchell the artist/designer/esthete, the manager, the teacher, the man, the—gasp—influencer. The goal: to show the reader “the real Bill Mitchell . . . one of the most significant car designers the world has ever known.” Some 80% of the book are devoted to that, principally divided into four chapters of which the largest, several hundred pages, presents the XP cars, each introduced with a rather brief narrative and then shown in a multitude of images from design drawings to construction to full-scale model, many of which previously unpublished. The general-interest reader will probably not have seen a good deal of this material before; some of it is from the GM Archive, some from Lonberger’s files since he was involved with a number of them, and some are modern-day digital reimaginings custom-created for this book. In contemplating the absence of Mitchell-specific verbiage in this the largest portion of the book, an earlier quote, attributed to another GM design maven at the time, Chuck Jordan, comes to mind: “Show me, don’t tell me.” It is left to the reader to discern on their own the guiding hand of Mitchell, and by extension, GM in these stylings. In a way then it is really the design buffs, be they amateur or pro, who will best be able to recognize the riches on offer here. The oversize landscape format of 13 x 11″ gives the images ample room to make an impact.

For anyone who failed to be moved by the car illustrations, Ch. 3 “The Accolades” speaks specifically to Mitchell traits. The commentary by his successors (Rybicki, Jordan, Cherry, Welburn) along with dozens of others, mostly A-listers in the auto world, is anything but flat or perfunctory. It is not only a testament both to the impact Mitchell had (and, really, has) but also to the merits of this book—and its author. Lonberger is after all one of their own, even though his stint under Mitchell was on the short side. (He would go on to wear many hats in the design world and start his own company, international product design and marketing communications firm Magna Design.)

The (autographed) book is presently available directly from the author or from Deans Garage, the “online meeting place for automobile designers” founded by ex GM-er Gary Smith.

Incidentally, if you ponder the timeline you’ll conclude Lonberger himself is not exactly a spring chicken so doing a fairly monumental book like this is all the more to be applauded. He says he has more books in him!

Dec. 2015: Released in a 2 vol. Designer Limited Edition of 25 sets under the same title as above but contents curtailed to 880 pp. 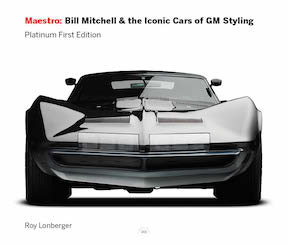 2018: a one-volume version of 440 p. is offered as a Platinum First Edition; same title as above.

Racer »
« More Than Automobiles: The Packards of Warren, Ohio