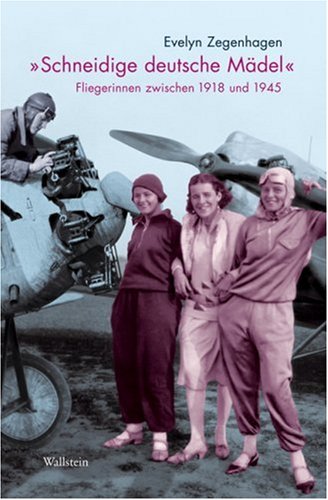 (German) Their own they called Dashing German Gals (the title of the book) but the enemy’s, Witches of the Night. “They” being the Nazi propaganda organs, and the person/s so lauded/derided are on the one hand German flyer Elly Beinhorn—“famous on five continents”—and on the other the 600-odd female pilots organized by the great Russian aviatrix Marina Raskova to fly fighters and bombers in combat in WW II.

From the earliest balloons to the space station, women have taken to the skies. What started as eccentricity or self-realization or novelty has become part of modern society’s warp and weft. Or so we like to think.

For every two steps forward, German historian and journalist Zegenhagen (b. 1962) argues here, the cause of women in aviation takes one backward. Progress, yes, but not commensurate with women’s contribution both to the field and to society. Worse, Zegenhagen’s evidence shows, women’s role in aviation advances—rather, is allowed to advance—when it suits “the powers that be” and declines when the urgency of whatever event or agenda made women’s involvement necessary wanes.

This, then, is a big-picture book. Figuratively at least, as it contains only very few photos which are very small. It is no coffee table glamour/glitz “celebration” of women in flight dispensing superficial platitudes about “how far we’ve come” but a sober and sobering examination of a moment in time. Based on a 2006 dissertation submitted to the Academy of the German Armed Forces (Universität der Bundeswehr)—garnering, incidentally, a summa cum laude—the book examines women’s private yearnings and career possibilities at a time in which civil and commercial aviation came to the fore worldwide vis-a-vis the societal, cultural, and political contexts in which women were at best “encouraged” and at worst “indulged” to become pilots in times of peace and war. It is only in the military context that women were ever “required” to fly and even that, especially in regard to active frontline combat, is largely confined to the former Soviet Union.

The writer is obviously a woman but the book, so it says, is not written from a feminist perspective or with a feminist agenda. However, its sometimes strident language is peppered with words—patriarchal, male-dominated, marginalization—that are difficult to divorce from just that frame of reference. Still, there surely is no point in taking that as anything other than the inevitable byproduct of a discussion that, at its core, revolves around issues of gender: no wo/man is an island, as it were.

Calling her book a “collective biography,” Zegenhagen has dug into the lives of 180 German pilots, 160 of whom are, apparently, here entered into the literature for the first time. She emphasizes that this number includes glider pilots, of whom there may well have been thousands, because their existence speaks to one of the factors that is unique to the German situation in the interwar years. Historically minded readers will recognize this as a result of the Treaty of Versailles that in 1919 ended the state of war between Germany and the Allied Powers. Among its most important and controversial provisions was that Germany, having been declared the aggressor, had to disarm. Specifically, aircraft were disallowed. Unlike the other countries—the US, Great Britain, USSR—Zegenhagen briefly touches upon, German aviation was thus affected by different forces. On the civilian side, the Paris Peace Conference established the International Commission for Air Navigation (today’s ICAO; the US did not join until 1944) that codified aviation matters. A few years after its founding it issued a regulation that only men could pilot commercial aircraft, so Germany, as a signatory nation, offered its career-minded flying women no viable prospects outside of sports (acrobatics, records etc.) or promotional flying. Since not everyone can do that, man or woman, the glider pilot’s license was for many women the only way to get airborne.

Based on a multitude of material in public and private archives, interviews, and media sources from newspapers to movies, Zegenhagen follows the evidence were it leads—which takes her, and us, to a point at which some rethinking is called for. Her main conclusions are:

To substantiate the overall story, 12 pilots are presented in detail and a further 70 mini bios are appended. This being an academic text, sources are everything and so almost every page has footnotes. Also appended are lists of archives (Germany, US, Russia) and more than 20 pages of bibliography as well as 1931–45 income declarations of Elly Beinhorn and Thea Rasche, abbreviations, descriptions of the various types of pilot’s licenses, and photo sources. The index lists people only, rather a weakness in a book so heavily laden with facts.

Bugatti: A Hundred Years of Innovations and Excellence (1909–2009) »
« Forward: The First American Unsupported Expedition to the North Pole