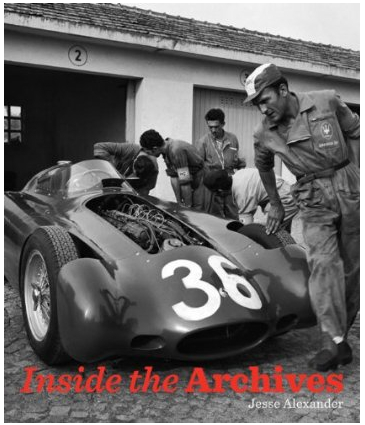 Make that, in Alexander’s own words, hundreds of thousands. Considering how long he’s been at it (1953), this large an output should be no surprise. What is surprising is that the images he now selected for this book he once thought deficient in some way, lacking whatever indefinable essence the artiste was looking for. But, anyone who has created something from nothing has experienced self-doubt, existential angst, trepidation at putting one’s work “out there,” for all the Monday-morning quarterbacks to see and second-guess.

Having begun to make a name for himself in tandem with the sport he documented, Alexander is today on that short list of seminal motorsports photographers that even the casual observer can rattle off.

He has added to the visual vocabulary of his time and is forevermore associated with images that have become iconic touchstones, emblematic of a period and style of racing that are no more, can be no more. (The use of past tense in the preceding is not to imply that he himself is “no more”—he’s still plenty busy with special projects and commissions and nature photography but he’s not been tearing up continents chasing races in his trusty Porsche for a long while.)

So, now—be it the remove of time, a more schooled eye, or a more charitable disposition towards his own work—Alexander allowed himself to be persuaded by his publisher to re-examine his old work and selected 78 examples from the 1950s and ‘60s for this book. Having already done four books together with a publisher who from his start in 1995 has been dedicated to producing the best books in motorsports, Alexander, who spends most of his time these days in the darkroom producing museum-grade limited-edition prints of his own work, must have had confidence in the high production values of this project. From its generously oversized 11.5 x 13” format to paper, design, and general “heft” this is a worthy book on every count.

That the photos are large is a foregone conclusion. The captions, however, are small/smallish. Not that there is a definitive “right” length; it’s just that the maestro surely has words of wisdom to impart as to what he saw and thought and tried to do when he took the photo. There are really only two instances in this book in which he specifically calls out a detail (p. 34/35 the unusual angle, p. 39 paint overspray). Not only would this be instructive to the budding photographer but it would school any reader’s eye. Ergo, in lieu of a guided tour, you, dear reader, must take your time to take in the compositions. Ponder how surreal the swan in the foreground is with the driver of the Ferrari 625 in the background halfway hanging out of his car (p. 16/17). Observe the Dali-esque cloud reflections in the bodywork on the D-Type Jags (p. 42/43—was that intentional?! C’mon! People want to know!). And, for this reviewer the photo that shows genius, one of those time warp universe-dissolving scenes a Dexter Brown would paint: a blur of a car at speed with the utterly still face of a boy in a doorway in the background (p. 60).

All photos but one are from the olden days. The one that is new (2004) you would miss unless you read the caption or unless you know your vintage cars well enough to catch the non-period Plexiglas in a photo that for all the world looks as if it was taken 40 years ago (p. 22). In historic terms there is one particular photo that is positively chilling for anyone who knows about the catastrophic carnage at the 1955 Le Mans: Pierre Levegh’s 300SLR, all shiny on its transporter, a few days before the world as we knew it ended (p. 19). What all this means is that a book like this requires audience participation. A photo can be, should be, a story.

Buy the book; see for yourself; take your time; learn; enjoy.

While most of the photos are of and about racing (and not just European GP but also Bonneville salt flats), one shows the 1956 Paris auto salon; several show the Maserati, Ferrari and Scaglietti factories; and one is by Denis Jenkinson of a futuristic Italian train. And people who are as interested in the photographers as they are in the photos will get a kick out of seeing German shutterbug Julius Weitmann (1962) and Alexander himself (1957) at work.

Also available as a Publisher’s Edition in a limited run of 300 featuring an additional 36 pages and 28 photos. The $250 price also buys a custom slipcase and a numbered and signed limited edition 11 x 13” print of a rainy practice session at the 1965 Monaco Grand Prix.

If you like these photos, check Alexander’s blog every now and then. He doesn’t post very often but once in a while he shows photos that catch his eye while he’s poking around in the archive.

Go Faster: The Graphic Design of Racing Cars »
« Kept in the Dark