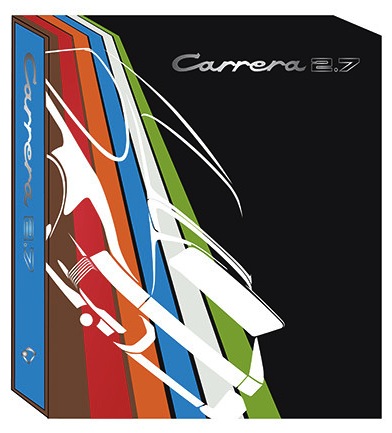 This lament by a Porsche owner explains why the subject of this book, the cars with the 2.7L motor with mechanical fuel injection, have “historically been overlooked by the general public and remained unknown to all but the most astute Porschephiles.”

And now there’s a book to right that wrong; and not just a book but the book. Truly, Carrera fans never had it so good! In short order, two important books have come out, and each/both qualify for Book of the Decade status. They are entirely sympathetic and complementary, even in terms of level of magnification and general appearance. The author of this book acknowledges a debt of gratitude to the other author—who wrote the Foreword to this one! Also, both books were designed by the same person and are physically so similar that one fits into the other’s slipcase. While both parties are quick to say that the latter is coincidental, both authors obviously knew they were writing for the same audience—anyone with Porsche 911 and 930 Turbo interests—and that both books will surely live side by side. 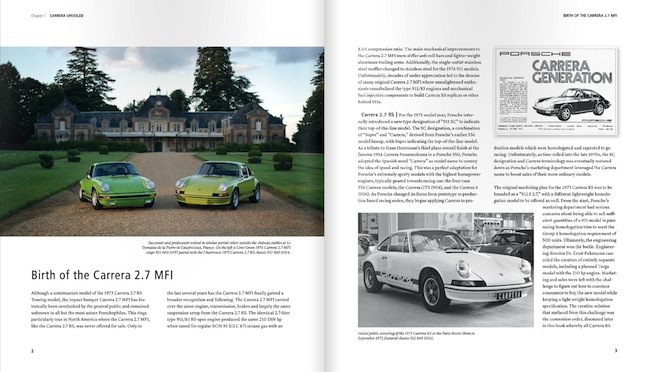 But, they are different books about different things. Specifically, the Snodgrass book is about a subset of the Carrera family, the 2.7 MFI (1974–76) that is the successor to the 2.7 RS the Konradsheim book examined. Either book could have come to market first and in fact the Snodgrass book would have been first if QC issues had not repeatedly delayed it. On the other hand, the order of the book releases now matches the order in which the cars came out! 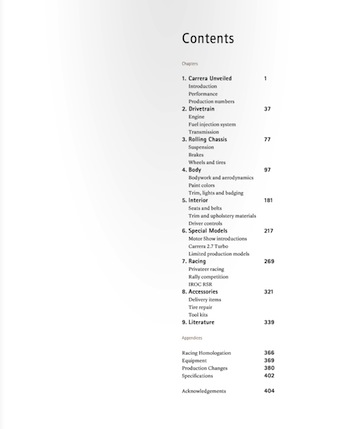 Many people have been watching the skies for this book for a long, long, long time. Since it was meant to be superlative in terms of research and also production values, the author rightly strove to achieve the best possible result—even if that meant delays. That this is his first book is immaterial; if anything, he fully embraced the notion that you can make a good first impression only once!

And just to get it out of the way, while the price may seem steep it is [a] entirely justified in terms of the quality of the product and [b] a pittance compared to the run-away prices of Carrera cars these days. If you are in the market for this model, or a restorer, this book is indispensable. The author writes, “It is my goal to see this reference book in a place of honor on every serious Porsche enthusiast’s bookshelf.” It surely will be. (Hey, if you were smart enough to buy one of the only 2500 copies, you could reduce your purchase price by charging others for the privilege of drooling over (over, not on) it. 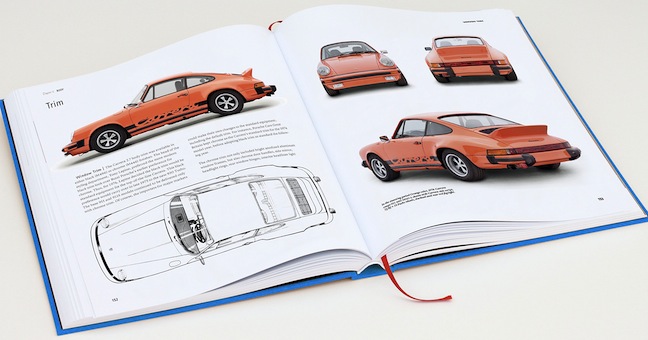 How thorough is this book? If you can’t tell one model year from another by the shape of the glovebox knob, look no further. Is Madras leatherette redder than Russet? Ever seen a Targa Roof Repair Manual? What finish should be on the wheel lip? The reason for singling out such minutia is to convey to the expert reader, i.e. the one who can fully appreciate the enormity of the scope, that if a book turns over those kinds of rocks then it “obviously” will cover such basics as the model-specific design and engineering angles, along with marketing, specs, and production numbers etc.

Moreover, Snodgrass is mindful of the timeline, specifically the incongruity of bringing a high-performance car to market in the 1970s, which is largely the reason it was not offered in Porsche’s largest market, North America. Worse, the model that did come here, the superficially similar 2.7 CIS, had lesser performance—again, a factor of the timeline, although, for once, the federally mandated impact bumpers actually benefited the looks of the car because they resulted in a shortening of the hood. 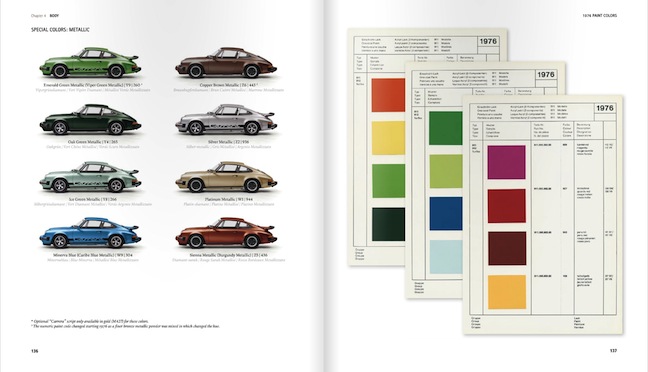 While to the man in the street a 911 is a 911 is a 911, Snodgrass begins by sorting out the family tree and the intricacies of nomenclature and the attending differences in spec. Those who find such things tedious should know that there will also be dozens of examples of “decoders” for anything from VIN numbers to components/assemblies to paint tags. Speaking of paint, one reason for the book’s delay is the author’s laudable—and in the end successful—effort to correctly reproduce the cars’ colors (above, also see the slipcase design), including metallics. If you know printing technology you’ll appreciate how difficult this is. And let’s not even talk of 20 tons of “defective” paper. 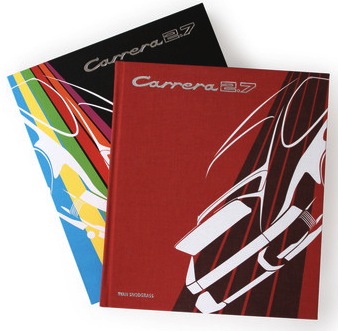 In fact, Snodgrass who was new to all this himself, includes a 16-page “Behind the Scenes” supplement to the special Publisher’s Edition (left, already sold out, note the different colors; limited to 300 numbered and autographed copies, $349.99, ISBN 978-0-9962682-0-2) that explains book production processes most readers would never know or think about.

Coverage of the car is divided into major build groups, and a chapter each is devoted to special models, racing, accessories, and literature accompanying the car (i.e. manuals and such) or used in-house (technical/service manuals etc.). Appended are a reproduction of the homologation forms, 1974–76 equipment lists and production changes by model year and market-specific, as well as specs and a Bibliography. No Index, you moan? Well, regrettably, that’s only available with the Publisher’s Edition. 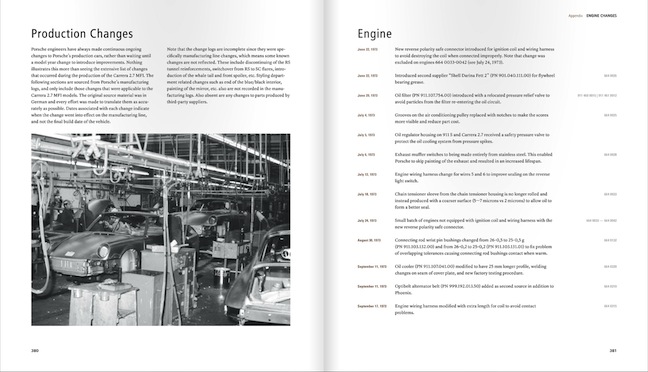 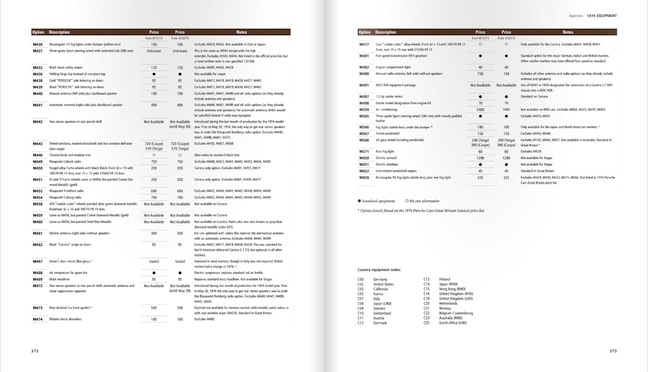 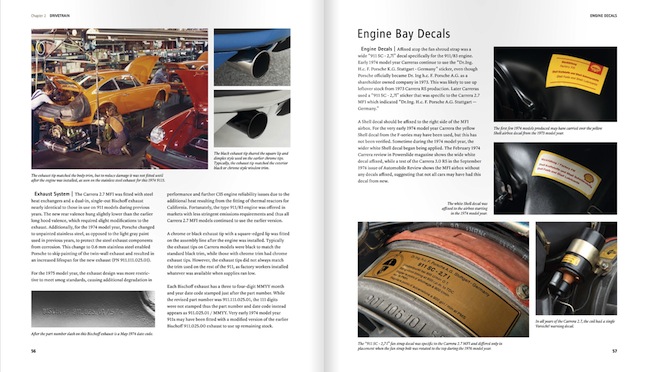 The text is most comprehensively augmented by illustrative material drawn from a variety of sources including the Porsche Archive and includes a cutaway drawing, factory blueprints, various exploded components, graphs, and reproductions of letters, memos (some translated), period road tests, and advertising material. Quite a bit of this has not been published before. A good number of photos of cars and details are also specific/new to this book (the complications of which are also discussed in the aforementioned Supplement). 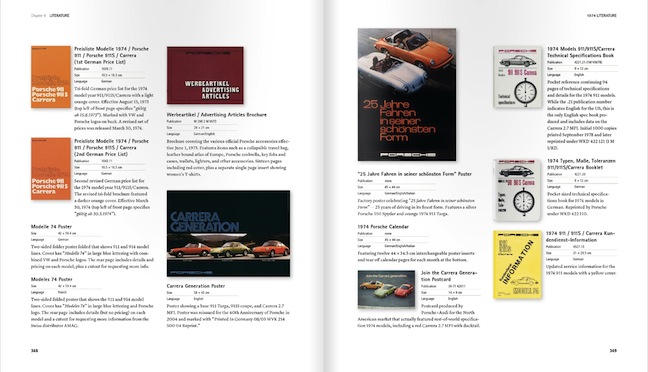 As the flagship MFI is “the best of what Porsche had to offer” so this book is the best that is available for this model. An ex-Amazon engineer (love/hate your Kindle??) Snodgrass only wrote it because he was about to buy an MFI and couldn’t find any decent literature. This review could be three times longer to properly enumerate all its virtues—even if you don’t have a Porsche-shaped bone in your body the book will be a serious treat for any bibliophile.

Snodgrass says he can feel another book stirring in him—maybe it’ll be Ferrari-themed because in his long-ago university days, that was one of his early automotive interests.