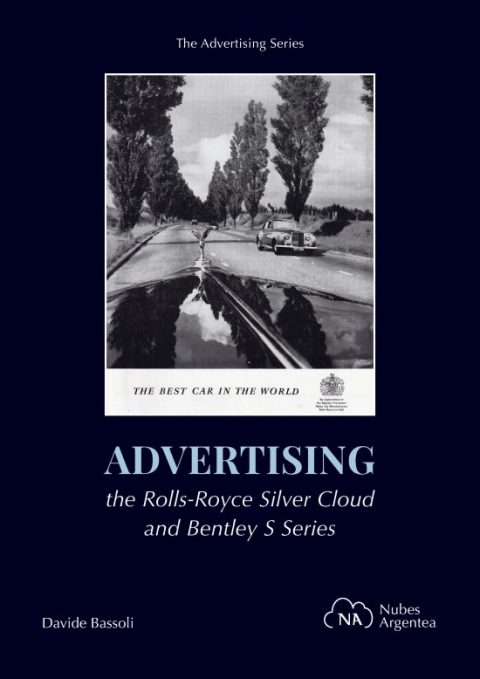 “Look who’s driving a Rolls-Royce.” Well, it’s not who you think it is.

Even if you had been in the market for one of these models when they were new (1955–1965/66) and think you’ve seen—or remember—every ad, chances are there’s much in this book you have not. The above tagline, for instance, is in fact by the Rolls-Royce company itself—but its Commercial Engines division, and it shows a diesel-powered crane!

Two data points need to be added to the subtitle: the book includes Bentley Continentals and at least two examples of the contemporary Phantom V (one by coachbuilder Park Ward which, during the SC/S era, had been integrated into Rolls-Royce). Another thing to know: this is the first of a whole “Advertising” series the author is planning (the next one will be about the Phantom III). 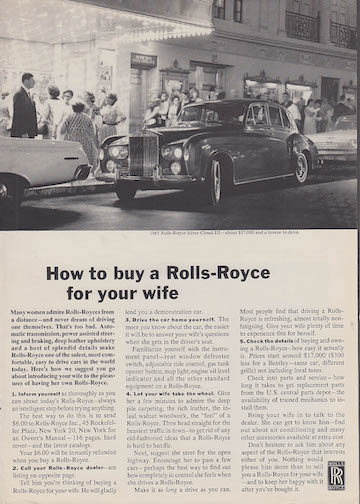 The 148-page book contains 140 mostly full-page ads—which means there is minimal text other than photo captions. If all you want is pretty pictures or a stroll down memory lane, this is just fine; more than fine, in fact, because the author doesn’t just show the obvious car ads by the manufacturer or dealers but also ads by OEM suppliers (from the obvious like Connolly = leather or Pressed Steel = bodies to the obscure like Marsten = radiators or Rocol = lubes), coachbuilders (including Radford for their “Countryman” conversion), other carmakers who benchmarked RR, and other entities who simply seek to boost the perception of their own wares by attaching themselves in sometimes absurd flights of fancy (Wamsutta towels, Dimanche pantyhose) to the halo effect of the Rolls-Royce brand. 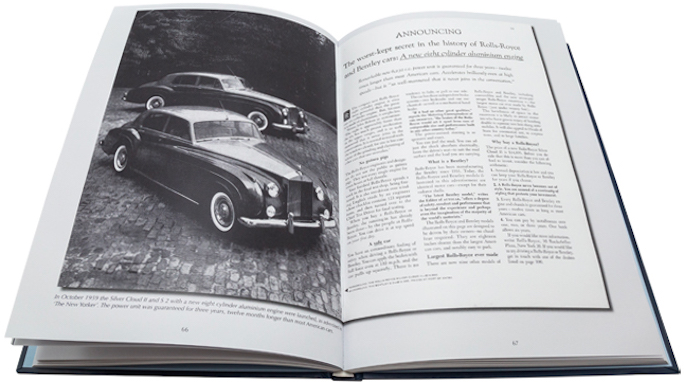 Speaking of halo effect: it must be nice to have shepherded a brand to such lofty, iconoclastic heights that you don’t even have to mention the product or maker outright by name to assure brand recognition. Several ads presented here merely show the one thing pretty much everyone can be assumed to associate with Rolls-Royce—the radiator grille and the Flying Lady mascot—with, just to make sure, the tagline “The Best Car in the World.” It’s interesting to observe that this slogan is only used in ads for Rolls-Royces, never the sister car, Bentley, for which the slogan is “Take a Bentley Into Partnership.” But—this sort of observation you’ll have to make entirely on your own, there being no explanatory text, and in that regard the book probably diminishes its utility a bit. 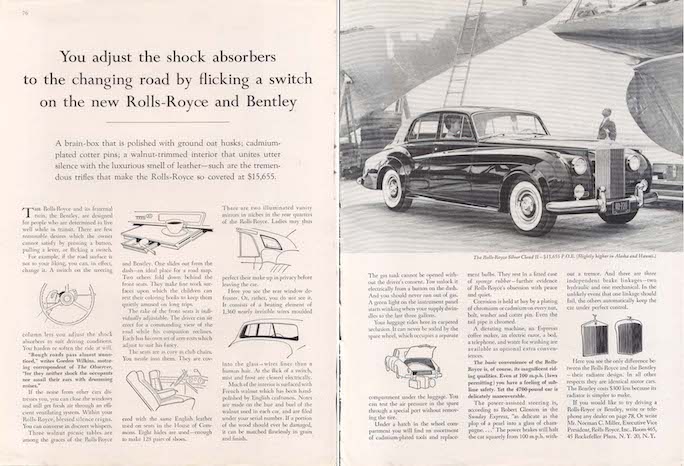 For example, you’d have to actually read all the words in the ads (which are quite “talky” compared to today’s) to notice that ads for all three series point out that the Bentley is $300 cheaper, “because the different radiator shell is simpler to make”—it does have a different shape but it also uses a different material, chromed pressed brass and not stainless steel. That all the ads that see fit to mention the price difference at all are by Rolls-Royce Inc. of America is surely worth pondering, as are the reasons why US ads tout such things as Rolls-Royces having an advantage over American luxury cars by being 18″ shorter (“easier to park”) or that installment financing can be arranged. Another US ad makes the point that a Rolls-Royce’s chassis and engine are guaranteed for 3 years—“12 times as long as most American cars.” Sounds swell, until you do the math, and then you’ll start to wonder if they’re really comparing apples to apples. 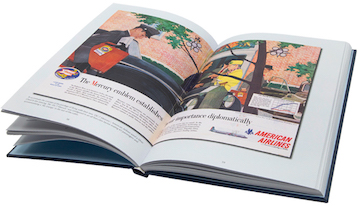 Long story short, there is a lot more to these ads than just pretty pictures, but it really is up to the author and his cohorts to bring it to the reader. On the plus side, several of the cars are identified by chassis number, easy enough in the case of factory or coachbuilder demonstrators, auto show cars, or UK cars in general whose registration numbers can be cross-referenced.

And, yes, the famous Grey Poupon ad is here (“Pardon Me . . .”) and the immortal Ogilvy ad everyone quotes still today (“The loudest noise in this new Rolls-Royce comes from the electric clock”) as are such practical pointers as heading “for the heaviest traffic you can find” to test drive a car, or that the rear picnic tables “make fine surfaces upon which the children can rest their coloring books to keep them quietly amused on long trips,” or that every company should buy its president a Rolls-Royce because “he’ll arrive in better shape” and thus live longer! All advertisers are listed in a table at the end by title, source, date, model of car, and book page.

That the book is already nearly sold out even though it was launched only weeks ago only proves that there is a receptive market for it.