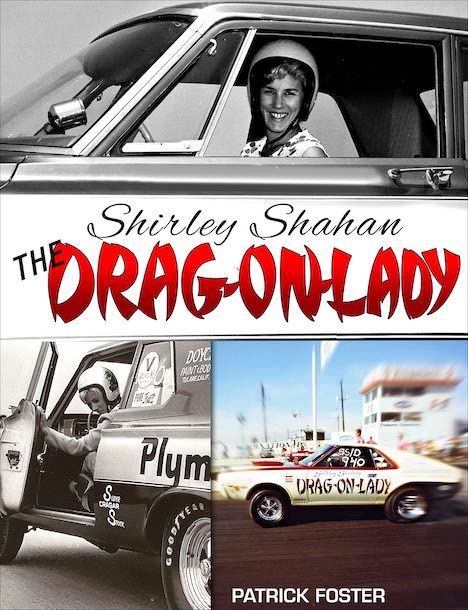 “Shirley was young and pretty with blonde hair. She otherwise might have spent her entire life as a stay-at-home mom, but both she and her husband, H.L., loved drag racing, and she enjoyed going to watch him race at he track. One day, fate stepped in, and she had to do the driving instead of H.L. That was when the couple realized a shocking truth: she was the better driver—by far.”

These days, women in motorsports have thankfully become more commonplace but when Shirley Shahan first began driving such was not the case. Undaunted, she, like her contemporary Paula Murphy, wouldn’t be intimidated much less stopped. Her career driving drag cars earned her her moniker The Drag-on Lady. Her fame was such that the Muscle Car and Corvette Nationals (MCACN), held annually in the convention center in the Rosemont suburb of Chicago, made her their special featured and honored guest in 2019 along with displaying two of the cars in which she had competed.

Shirley didn’t set out to become a racer of any type; most certainly not a professional driver. But her husband H.L. was. (H.L. was his entire and real name, the initials didn’t stand for anything.) Shirley had grown up around a father and uncle who enjoyed racing so she was no stranger to that world and she thoroughly enjoyed accompanying H.L., even piloting a few runs herself. But she also had a good job with the Southern California Gas Company, a home to tend, and three youngsters to mother and raise.

But as the images on the page pair immediately below show, she was pretty and was as personable as she was attractive. When Shirley also proved to be a winner, the crowds took to her as well as the sponsors. H.L. as a gifted mechanic made sure she had a fast car and Shirley’s competitive spirit and ever-increasing skill behind the wheel took it from there. The Drag-on Lady was born. 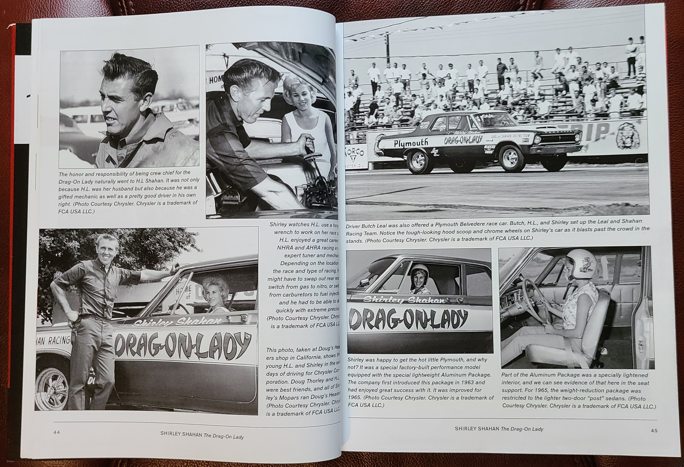 It didn’t happen overnight, of course, but as the racing schedule got busier and fuller with sponsors and fans clamoring for her to race at venues ever further away from home, something had to give. After a decade of racing, in 1966 Shirley resigned from her gas company job, making sure not to “burn any bridges,” to become a full-time Super Stock professional racer.

Both Shirley and H.L. had become great friends with fellow competitor Hubert Platt, the Georgia Shaker, whose biography we told you about in a 2019 post. Then we didn’t share with you the story and photo of what is likely the first drag racer in drag. To pull it off, Platt put on a blonde wig. Donning his fire suit, the same silver color as Shirley’s, he drove her car to the starting line. The crowd thought nothing of it until Platt stepped out and then the roar went up.

As Foster writes, “Once the comedy was over, the two competitors got down to the business at hand. Shirley put Platt in his place winning the first two rounds, but then Platt came back strong and won rounds three and four. The fifth run would have decided the winner but before it got going the transmission in Shirley’s Mopar broke. The track officials ended up calling it a tie.”

An entire chapter is devoted to Shirley Shahan’s participation in “The Mobilgas Economy Runs.” Foster provides an excellent explanation of the rules and how they actually play out on the road during the years Shirley participated—1966 to and including 1968—culminating in her being the big winner her last year.

The images below are all associated with Shirley’s participation in the Mobilgas Economy Run. Top left clearly shows that the route was not always on paved surfaces as it was intended to reflect the mix of roads used by everyday folk. Bottom left, a family scene with Shirley and H.L. discussing her upcoming participation with their eldest, Janet, and that, once again, Shirley would be away from home for up to a week. On right, Shirley poses seated on her 1966 Plymouth Fury. 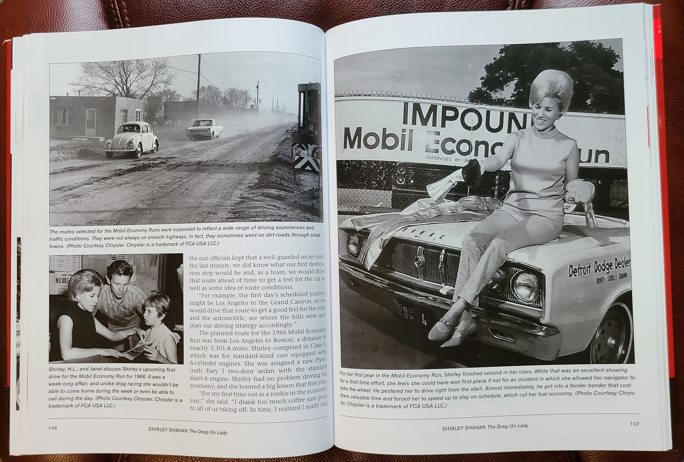 Happy as her association with Chrysler had been, when AMC made a more attractive offer that included a regular salary, lacking in the sponsorship agreement with Chrysler, H.L. and Shirley agreed the time was opportune to make a change. Thus 1969 found Shirley putting her foot on the loud pedal of an SS/AMX and loving too that it was stick shift.

As the images on the page pair below hint, it was a most successful pairing for four years. But in 1972 business concerns dictated AMC refocus, scaling back its racing efforts. Shirley hung up her driving suit, resumed her position—advancing rapidly—at the SoCal Gas Company and once again being able to be a full-time mom while H.L. accepted an offer to build racing engines at a Denver race shop. 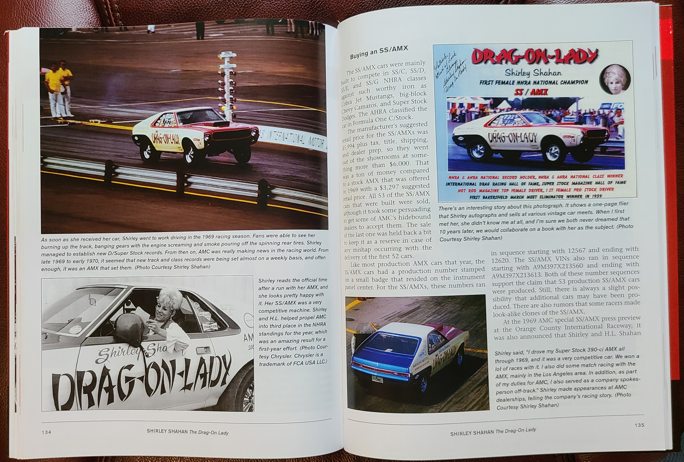 With his concluding chapter, Pat Foster provides a fine, sensitive and thorough narration of the Drag-on Lady’s days both on track with power beneath her foot and afterward including that wonderful tribute to her at the 2019 MCACN show with which we opened. The reader is the winner as Foster permits us to get to know both personally and professionally, just as he did while researching and writing, one fine lady named Shirley Shahan.