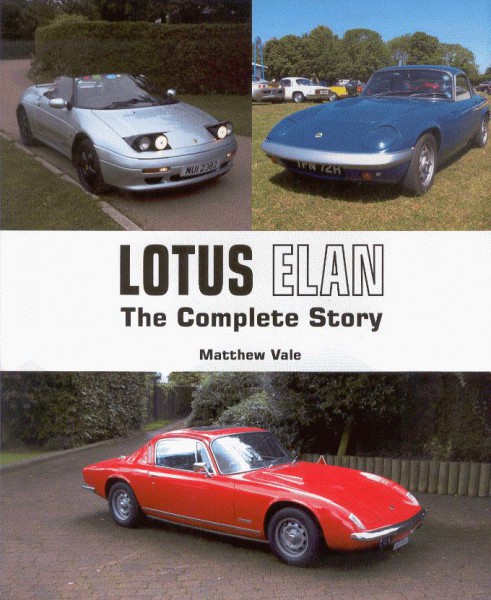 “This book aims to identify the main specification changes that occurred, but in investigating the world of the Elan it does appear that detailed record keeping at Lotus was subordinate to getting the cars to the customers.”

Lotus was of course not alone in lacking detailed record-keeping but in its case, a number of factors unique to its situation in general and the Elan in particular conspired to interfere with the proper recording of the sort of hard data today’s collector and restorer would love to have available. This fine book takes a much-needed stab at sorting out matters.

Other than the occasional magazine feature, especially in 2012 when the Elan turned 50, there is actually only a small body of serious literature (i.e. not considering “pictorials” of which there are several) on this important car. One might speculate if Vale timed the release of his book to follow the anniversary year or, perhaps more plausible, in anticipation of the projected 2013 launch of the all-new Elan that had been announced at the 2010 Paris Motor Show. That would have been one sexy car but the project was cancelled.

Vale had half a dozen motorcycling books under his belt by the time his long-cherished dream of Lotus ownership came true (a rather derelict Elan Plus 2S). More than anything, being an owner and enthusiast elevates this book because it is brimming with practical, usable, relatable bits about owning, running, and modifying any of the three Elan models produced by Lotus 1962–1973. But, it gets better: even the 800-odd cars from the short-lived 1994/95 Bugatti effort and the Elan M100 from the Kia era are discussed. And, truly living up to the “Complete Story” billing, even Specials are covered so if Vegantune, IWR and Shapecraft, or utility bodies such as the Elanbulance or Estates (aka station wagons) have been missing from your Lotus lexicon, this book will fill you in.

Naturally the early history of Lotus and company founder Chapman is covered too, quite well but only in broad strokes. Still, readers new to the topic will come to see how the dots connect and the Elite begat the Elan . . . which begat another Elite and another Elan. And it is the first iteration of the Elite, more competition than road car, that spawned the one factor that complicates the Elan story when it comes to factory specs, build numbers and years etc.: kit cars that those customers who wanted to save a quarter or more of the purchase price could bolt together themselves in as little as a weekend. Add to that various special customer requests fulfilled by the factory and you end up with a plethora of original but non-standard finishes and options or mechanical bits.

Readers with an interest in fiberglass cars will of course appreciate Vale’s discussion of GRP, then an emerging technology. Also, Lotus’ work on the Ford Twin Cam engine gets its own chapter. Each Elan variant is treated individually beginning with an overview of developmental and engineering factors before switching to an in-depth exploration of components and assemblies, exterior/interior, all leavened with data tables.

Also offered are resources (books, clubs, Internet) and a Nut and Bolt Size Decoder. The Index may look short but is quite good. And while there is a Bibliography it does not list dates.

What gives the book a bit of a homey feel are the frequent references to the cars of specific owners that may well be known on the UK Lotus Club scene but not beyond. It is also odd that Vale does not specifically address one item that even otherwise well-informed car buffs will often think of—mistakenly—as a flaw, especially on restored cars: the doors are often not flush with the body at the bottom and the trailing edge, but this is normal. (He does, however, talk about bodywork issues in general). In fact, the very first photo in the book shows just such a case, and on a yellow car which makes the pronounced shadow cast by the misalignment unmistakable. This alignment is specific to certain GRP bodies by certain makers—and a savvy judge would penalize the car if it were “perfect”!

This being a title in Crowood’s “Autoclassics” series means it follows an established format, is nicely printed and presented, and all around solid value for the money.

Journey to the West »
« Memories Of The Moon Age