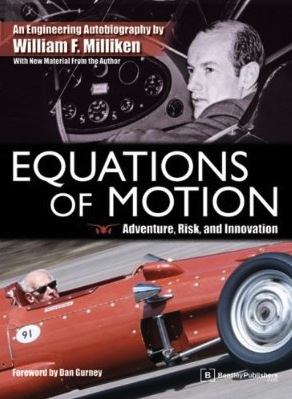 You’ve heard the saying about someone having “forgotten more than the rest of us will ever know.” This certainly applies to Bill Milliken (b. 1911), except that he hasn’t forgotten anything! He was 95 years old when he published the first version of this autobiography, the hardcover edition, and 97 when he published the expanded softcover edition. And he was still sharp as a tack at the 99th birthday bash thrown for him in April 2010 by the International Motor Racing Research Center at Watkins Glen—which has a corner named after him where he rolled his Type 35A Bugatti in a section of the original circuit during the inaugural race in 1948. He is still involved as an occasional consultant in his company, Milliken Research Associates (MRA), now headed by his son Doug.

Milliken’s life story is the story of 21st century engineering. His editor, the late Beverly Kimes, called him—approvingly!—“equal part Peter Pan and Dennis the Menace.” Karl Ludvigsen, himself one of the tireless laborers among automotive scholars, said of him in a 2004 appreciation, “By rights you shouldn’t be reading this. The subject of this profile should have been dead and buried long ago. He’s stuck out his tongue at the Grim Reaper more times than that menacing gentleman can count.”

This is not the life of a pencil pusher in the pocket protector brigade!

From an early age, he was interested in things that moved—and what kept them upright or aloft. He built a car and raced it and built a plane and flew it. This seat of the pants experience lead to rigorous academic training, acquiring at school and university (MIT) the analytical tools to understand the processes. And he made a name for himself, a big name, in his chosen field of stability control. The impact the man, and his firm still today, had and have cannot be overstated. If you have driven [in] a car or flown [in] a plane—both reflected in MRA’s clever logo—you have benefited from the fruits of Milliken’s labor. (If this is too hoity-toity, recall the 1974 James Bond movieThe Man with the Golden Gun. Remember the red 1974 AMC Javelin performing a 52-ft spiral aerial jump across a river? Milliken, then head of Cornell Aeronautical Laboratory’s Transportation Research Division, figured out how to do it. And probably would have loved to do the stunt himself!) To this day MRA is among the top consultants to racing teams and carmakers who consider the many zeros they put on their checks money well spent. His and his son’s technical books are on the bookshelves of anyone anywhere dealing with vehicle dynamics.

And even if you don’t have any ambitions of making cars or planes handle better yourself, you will be moved by this account of a witty, low-key, plucky giant among men whose life intersected with so many things, events, and people whose names are the proverbial household names. He was assistant chief of flight testing for Boeing and involved in early B17 and B29 testing, had his advice ignored on the XP79 fighter which resulted in its destruction on its first and only flight, worked on fly-by-wire technology, raced sports cars for some 15 years, migrated his theoretical models from aircraft to cars—and launched a whole new career working with all the makes and racers and engineering types you’ll recognize if you weren’t sleeping through the last fifty years. Who wouldn’t find something in this book to be interested in??

The book is subtitled “An Engineering Autobiography” because its emphasis is on the man’s professional interests; personal and anecdotal bits are interwoven wherever they are relevant. The writing is very fluid and will captivate anyone who has even the remotest sense of wonder at the incomprehensibly quick advances in locomotion within the space of just one century. The academic side of this discipline can be dry indeed but the empiric side, as portrayed here, is good for hair-raising tales of death-defying stunts. There is very little hardcore technical material (mostly confined to the chapter about camber) to tax the reader. Photos and illustrations—all b/w—are plentiful. The book is extensively appended (memos/correspondence, SCCA positions/contributions, the curious case of his former boss Al Reed, awards/honors) and has a supremely well-layered, award-worthy Index. Cleverly, the flap of the book jacket’s outside front cover shows a Table of Contents; unlike the “proper” TOC on the inside it doesn’t give page numbers but lists instead the key topic in each section, allowing for quick reference.

The softcover edition adds one chapter (plus attending Index updates) about the 2007 Goodwood Festival of Speed where Milliken once more drove his radical MX-1 Camber Car. Its extreme negative camber makes it look as if the wheels are collapsing but is good for a neck-wrenching 1.3 g cornering force!

We started this review with an expression and will end it with one: Milliken’s professional career exceeds the bounds of normalcy—it is “off the charts.” Readers of a certain age would be forgiven if this autobiography were to give them the urge to indulge their midlife crises and reinvent themselves as engineers!

A Gullwing at Twilight, Shifting Gears Gracefully »
« The Rolls-Royce Silver Ghost: Origins and Development of the 40-50 HP Model 1906–26