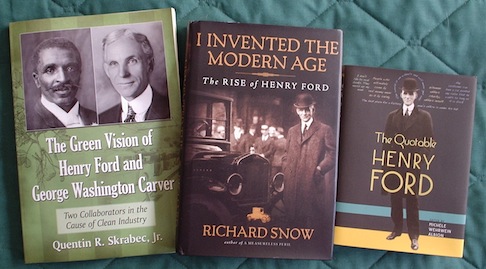 As if proof were needed of the ongoing fascination writers (and readers) have with Henry Ford, who truly was a multi-faceted man, the first half of 2013 saw publication of three brand-new approaches to interpreting him. Although each of the three books has flaws, each also makes a genuine contribution to the overall body of knowledge. The paragraphs that follow provide you with some information to help you assess whether one or all three ought to be added to the shelves of your own library.

Michele Wehrwein Albion perhaps was inspired by Bartletts and other resource books of famous quotations. But the approach she takes with her books, of which The Quotable Henry Ford is her third, is to focus on a single individual. She described Ford in her preface as “. . . a difficult man to understand” and thus would have benefited from having the other two books, Quentin Skrabec’s The Green Vision of Henry Ford and George Washington Carver and Richard Snow’s I Invented the Modern Age, The Rise of Henry Ford as resources due to the reality that sources inform and these other new books contain the balanced insights of their respective authors.

Albion noted in her third chapter of The Quotable Henry Ford that his utterances often contradicted himself. Your reviewer asks you to consider that Ford was so visible, and so voluble, and involved in so many different enterprises over the long years of his life that, looked at in hindsight, is it really any surprise that things he said would have changed, even to contradicting some of his own earlier comments?

Donn Werling, a Ford scholar who conducted numerous living history interviews during the time he served as director of the University of Michigan’s National Historic Home of Henry Ford (otherwise known as Fair Lane), also wrote a book. In his Henry Ford: A Hearthside Perspective (SAE, 2000) he observed “you are what you read.” And in direct contrast, contradicting some of the quotations Albion selected, Werling describes in detail the extensive and eclectic library at Fair Lane that was augmented by sizeable “stashes” of still more books and periodicals throughout the house—a great many of which had marks and notations beside the text in handwriting proven to be that of Ford and thus substantiating that both Henry and Clara read extensively on all manner of topics.

Werling (and other sources) concur with Albion that Henry’s well-known “any color as long as it’s black” was said in 1909. But as Model T enthusiasts (and many others) know, the T was available from the factory 1908 to 1913 in a virtual rainbow of colors. Further as Lindsay Brooke wrote in his 2008 book Ford Model T, The Car That Put The World On Wheels, “Recent scholarship indicates this was because black paint was cheaper and more durable than other colors, not because black paints of the time dried any faster, as has been widely suggested in the past. . . .” The lasting impact of this ‘quote’ has misled everyone except the Model T hobbyists and students of Ford history who knew” better.

Albion organized her selection of quotations into chapters by subject or topic on which Ford was pronouncing and, befitting the publisher’s and her own scholarly background, documents the source and date of each. But her choices also give readers an indication of her biases and beliefs concerning Ford’s character thus reinforcing that a reader ought never disengage ones own critical thinking process while reading.

A more balanced look at a fellow human being, who just happened to be Henry Ford, will be found in I Invented the Modern Age, The Rise of Henry Ford. Its author, Richard Snow, is indubitably a scholar, writer, and historian as his credentials performing all those functions for years with American Heritage magazine make clear.

Generally Snow succeeds quite well and if you don’t already have a variety of books in your library specifically about Henry Ford, this new book, which draws upon many of those previously published, is one you should consider both for its factualness and readability.

That said your reviewer confesses to surprise that three books in particular are not listed as resources, given the extensiveness of those that were consulted by the writer and his professional researchers. One of those is even from the same Simon & Schuster publisher, Ford at Fifty. The other two are both from SAE, one is the aforementioned title by Donn Werling and the other is Beverly Rae Kimes’ Pioneers, Engineers, and Scoundrels, The Dawn of the Automobile in America precisely because its focus is on the era that Snow wrote in his Notes and Acknowledgements had motivated him to write this book.

Both Albion and Snow books include the 1978 John Côté Dahlinger-authored The Secret Life of Henry Ford in their respective bibliographies which makes it interesting to note that a citation that went unnoticed (certainly not included) by Albion was not merely noticed by Snow, but became the I Invented the Modern Age title of his book. Of it Snow observes, “The claim is as preposterous as it is megalomaniacal. It is also largely true.”

Those two sentences, fourteen words, are representative of Snow’s writing. His words tell the story of a man who was being changed by the world in which he lived and the people who populated it even as he was pursuing and creating his own product and processes that would in their turn change the world.

Snow sees a Henry Ford full of curiosity who then has the strength and character to persevere and see his ideas through to fruition. Simultaneously Snow puts the human face on the man, exploring Ford’s life and motivations via those years leading up to and throughout the production of the Model T. Over the time it took him to research and write, Snow says that as “I got to know him better, I liked him more, and less: The slim gray spirit suddenly blazing with the possibilities of the whole twentieth century and drawing disciples to his heat, the friend of all humankind, the friend of nobody, the most famous living American going from being a great man to a rather awful one within what seems the span of a single year.” Telling about the Henry Ford he came to “know” is what makes Richard Snow’s book compelling.

The third Henry Ford-book offers a focused look at a specific aspect of Ford’s life just as its title suggests; The Green Vision of Henry Ford and George Washington Carver, Two Collaborators in the Cause of Clean Industry. And confirming the scholarly research, thinking and subsequent writing it contains, publisher McFarland has chosen, as it often does, to print it on acid-free stock.

Overall the book has more that commends and recommends it but it isn’t without its “clunks.” One is author Quentin Skrabec’s annoying habit of practicing that old salesman’s mantra. You know the one that goes something like: Tell them once; then tell them what you told them; and then tell them again at least one, preferably more, times. Yet Skrabec is no stranger to writing/publishing with, to date, some 17 published books to his credit of which at least ten McFarland-published.

But once the reader numbs to the repetition, there are a wealth of insights into what heretofore have had only fleeting mention in other books about Henry Ford, namely his active environmentalist beliefs and practices and the ensuing friendship with George Washington Carver. That friendship points up a puzzlement that both Skrabec and Snow comment on in their respective tomes; namely how a person who was so unabashedly anti-Semitic was also so fully supportive of women’s rights and non-discriminating of other races and ethnicities as was Ford.

Or the other reality; Henry Ford was, in equal parts, an industrialist and an avid environmentalist. That said, even as an industrialist, Ford advocated building things in a way that was mindful of the natural world. Those views, which he and Carver shared, have finally gained wider traction a century-plus later, lending this book a bittersweet quality as the reader (well this reader anyway) contemplates what might have been had the industrial community heeded the wisdom of Ford and Carver over the past 100 years.

Two “clunks” of greater concern include one about Postum, a grain-based caffeine-less coffee alternative developed in 1895 and marketed continuously since. It is consistently misspelled (either through ignorance or over-zealous spell-check) Possom. Your reviewer’s first reaction was the error was (aside from humorous) just an oversight until reading further and discovering other similar examples of malapropisms. But a more serious gaffe quite stunned your reviewer: author Skrabec consistently refers to and identifies Henry Ford II as Henry and Clara’s son. Setting aside the errors, as much in this book comes from real and new research, its plusses far out weigh its problems.

Adapted from its first publication in the SAH Journal vol. 263, the publication of the Society of Automotive Historians.

I Invented the Modern Age, The Rise of Henry Ford

The Green Vision of Henry Ford and George Washington Carver

Two Collaborators in the Cause of Clean Industry

ARCADE Toys Catalog »
« Heritage of the Sea: Famous Preserved Ships Around the UK