The Unauthorised Biography of Max Verstappen 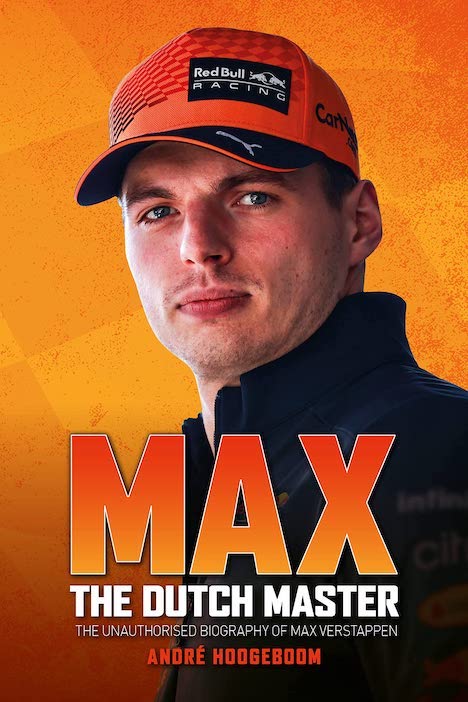 “Max is ruthless when it comes to a battle on the track. The usual expression . . . is ‘death or glory’ and the Dutch have their own version . . . ‘dood of gladiolen’ (death or gladioli) . . . referring back to Roman times.”

“Who’s the boss? Jos! Jos! Jos!” chanted the bunch of well refreshed Dutchmen as I watched practice for the British Grand Prix in 1994. But Jos didn’t ever set the F1 world alight, any pyrotechnics being confined to a pitstop fuel fire in his Benetton at the German Grand Prix at Hockenheim. Son Max wasn’t even a twinkle in Jos’ eye then, but in 2022 he is undisputedly one of the best race drivers in the world. But let me get the elephant in the room sorted out before I talk about the book—Max won the 2021 championship in controversial, if not downright farcical, circumstances in the dying seconds of the final Grand Prix. Whilst his rival, Lewis Hamilton, would have been an equally deserving champion, Max did win, and the fact that the FIA’s dithering contributed to the victory doesn’t tarnish his achievement. Netflix’s Drive to Survive series has created a vast new TV audience for F1 and, predictably enough, reaction to the Abu Dhabi pantomime produced a Twitterstorm, nearly broke the internet, and triggered death threats for the hapless Nicholas Latifi whose accident indirectly contributed to the brouhaha in the Gulf. And the respective team bosses, Mercedes’ Toto Wolff and Red Bull’s Christian Horner were not exactly models of restraint in their public utterances either.

With that backstory, I will confess that my hopes were not high for Hoogeboom’s book, which I assumed would be the sort of hastily cobbled together hagiography which often follows a world championship. But the fact that this book only starts to talk about Verstappen’s F1 career halfway through reflects Hoogeboom’s unexpected approach to the book. This is an unauthorized biography which the author started to write in 2016 and, given the armies of PR staff that are deployed by Formula One teams to control every public utterance by their drivers, it is not surprising that the most interesting part of the book relates to Verstappen’s ascent through the junior formulae. Brits like me tend to be Anglocentric in our outlook and it was fascinating to read of the thriving Dutch and Belgian scene, starring characters like former F1 driver Huub Rothengatter, Kees van den Grint, Paul Lemmers and Frits van Amersfoort, who ran Max’s 2014 Formula 3 campaign. 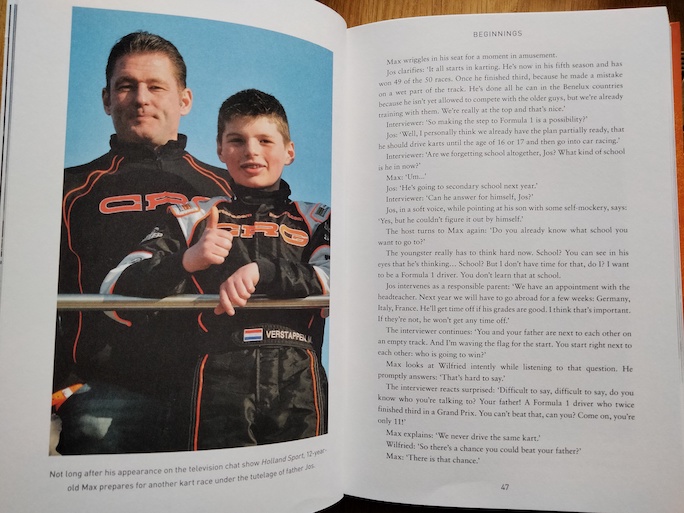 Many F1 drivers’ parents are not public figures in their own right but, to understand Max, you also need to understand Jos and his ex-wife Sophie, a successful kart racer. As she puts it “The fierceness, and racing, (Max) . . . gets from Jos. The gentle part comes from me.” But Jos and Sophie divorced and, in a pragmatic approach to child custody (maybe it’s a Dutch thing?), Max lived with his father, and sister Victoria with her mother. The author recounts how it became clear that Max had a special talent from his earliest days as a young kid in karts. Rough diamond Jos sounded like the karting dad from hell as he tough-loved his kid to ever greater efforts on the track, but history suggests that the end justified his means. Max developed his own style, and the veteran F1 journalist Peter Windsor describes it thus: “Most people don’t understand that an early braker is faster. All the greats, past and present, have that characteristic. Problem is, you can’t learn a driving style like that. You have to be born with it.” That style, allied to a karter’s creativity with wet weather lines, convinced me that Max was almost supernaturally gifted as I watched the television coverage of the Brazilian Grand Prix in 2016. The author rightly cites this as one of Max’s finest races and I haven’t a scintilla of doubt about his view, because Max made the rest of the F1 grid look like amateurs on that soaking day at Interlagos. 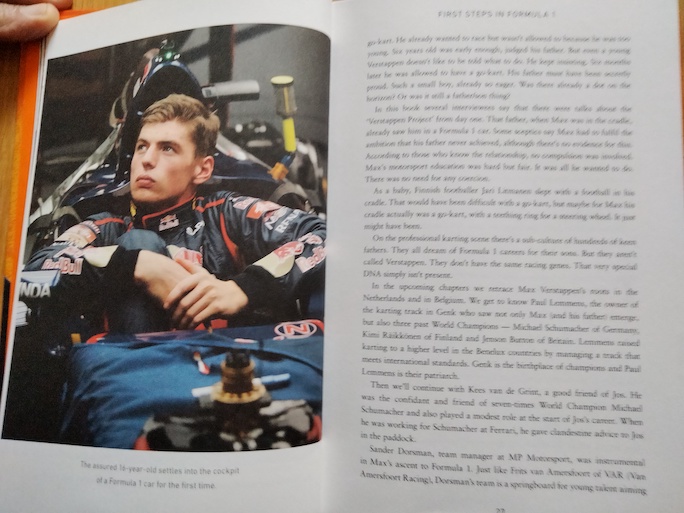 I mentioned above that the book has less about Max’s F1 career in general, and the stormy 2021 season in particular, than some readers might expect. But that is no big loss, as each and every sling and arrow of Max and Lewis’ fortune has already had more than enough exposure—and is there anything left to say that hasn’t already been said? If there ever comes a time when more does need to be said it will be many years hence, and long after both drivers have retired. In any case, most F1 drivers never have anything of any real interest to say during and sometimes even after their career. But the really smart ones, like Damon Hill and Martin Brundle, shine brightest when the driving gloves come off for the last time. Max will certainly enjoy more success on track than either, but whether his words will prove to be as insightful as theirs remains to be seen. I’m not hopeful, as one chapter (“Speaking His Mind”) is devoted entirely to quotes culled from Max’s public utterances. Apart from filling a few pages I’m not convinced their inclusion has any other point, as our man doesn’t say even one thing of real interest. Take Max’s comment on Hamilton’s compliments on his driving: “He is only nice when he wins.” Hardly the most penetrating aperçu I’ve ever heard, but in motorsport, as elsewhere, one should only judge the art and not the artist. That mantra won’t sit well with the Twitter community but, like most grown-ups, I judge race drivers by their results. And I’d guess that, in Max’s case, there isn’t much in his life that is unrelated to racing. I’d be surprised if he had much cultural hinterland, but, as the book is almost silent about Max’s personal life, that is guesswork on my part. 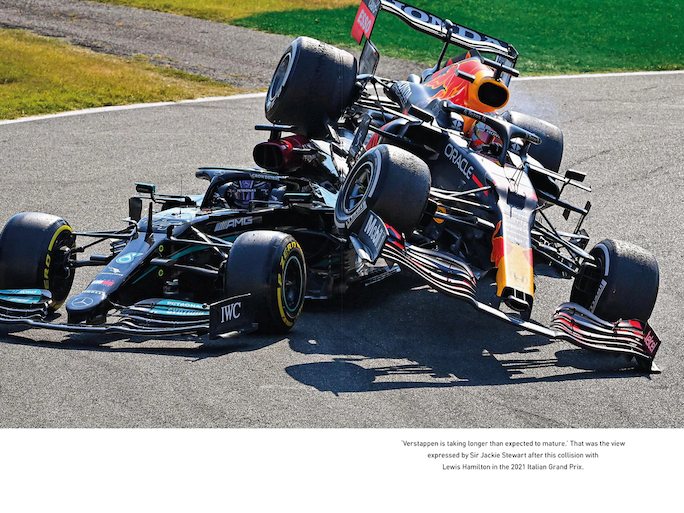 Verstappen on top, but not in the way that made his paymasters and advisers proud.

Hoogeboom writes with insight and style, and his obvious bias can be forgiven as being part of the massive feel-good effect Max has had on Dutch identity and self-esteem. The standard of translation from the original Dutch is perfect, and the book reads more fluently than several F1 biographies I’ve endured in recent years. The book is what we’ve come to expect from Evro—a robust, well-designed, and excellently illustrated hardback—and while it certainly will not be the only biography of Max Verstappen (who is still only 24) it certainly deserves to belong on the bookshelf of any member of Max’s famous “Orange Army.”

The Unauthorised Biography of Max Verstappen