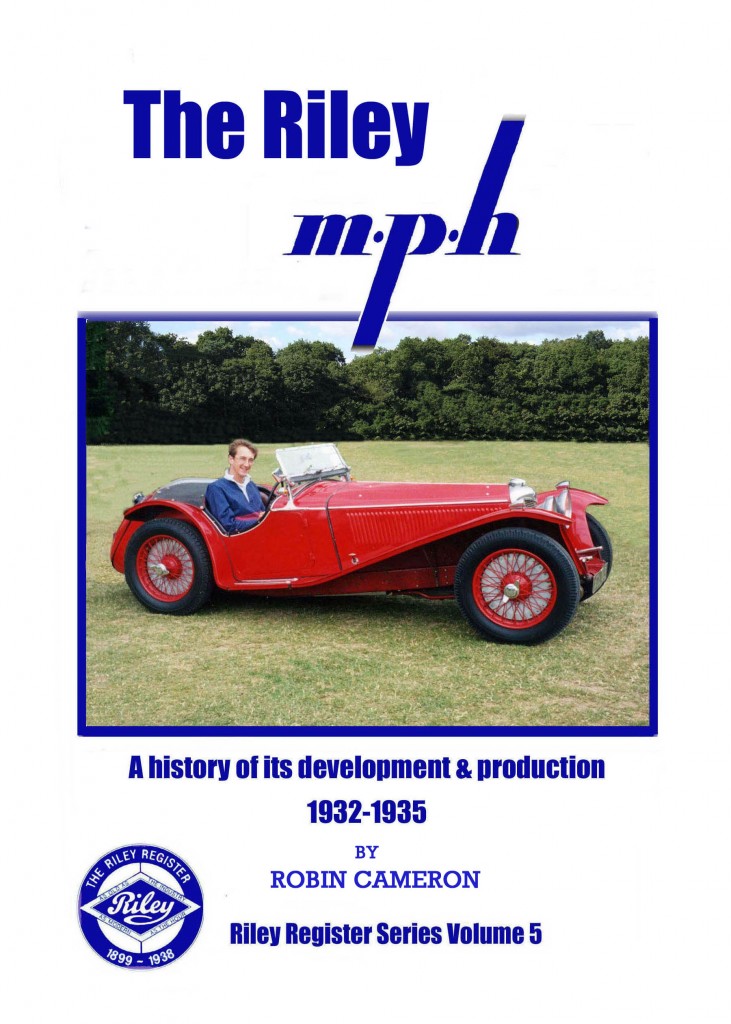 Blink—and you missed it! No, not because it’s so fast but because it was offered for only half a year and in all of 14 copies (no more than 17 if you include prototypes and racing versions.) Like many other makers’ “Vitesse” or “Speed” models Riley’s “MPH” was less about nominal speed than the idea of speed. With a favorable tailwind the speedo needle might pass 80 mph, which may not sound fast but feels plenty fast from the cockpit of this tiny, long-hooded, low-to-the-ground machine. And, if nothing else, the car looked fast and more than one commentator pronounced it the most beautiful sports car of its era.

With so few original cars made, chances are you haven’t seen one in the wild. You may not even have seen a replica although there are rather a lot of those. The Riley literature too is not exactly brimming with detail about the model so this book by a long-time owner is a most worthwhile addition. Even if you don’t give a hoot about the MPH you’ll want to read this book merely for the pleasure of rolling sentences like this around in your head: “Next day with £100 borrowed and £10 haggled off I became a two-Riley man and the bemused umpteenth owner of the lovely but very shabby and badly mistreated AOL 763.” You can open the book pretty much anywhere and come across such clever, well crafted, polished use of language—and this from someone who is not a professional scribe but a retired marine engineer.

Today the MPH is iconic enough for GM’s former vice chairman of global product development Bob The Car Guy Lutz to have one in his garage (and, see above, to be copied). When author Cameron bought his, in 1961, it was simply a cheap car. At £175 it was about the third of the cost of the cheapest new car but before you congratulate Cameron on his car-buying acumen consider that he passed up a £75 Bugatti parked right next to it. Where’s the crystal ball when you need one?

Cameron started amassing information about MPHs already back then, communed with other owners, and got involved with the Riley Register. Founded in 1954 the Register plays, as do marque clubs in general, an inestimable role in the preservation of data and artefacts and in advancing the body of knowledge. This book, the Register’s fifth monograph on an individual model/series, is a supremely convincing example of the depth of the resources that specialist clubs and highly motivated owners/custodians can bring to bear. Fifty years of experience with his car in particular and Riley lore and culture in general allow Cameron to leave no stone unturned.

A brief synopsis of Riley’s 6-cylinder cars in the 1930s lays the groundwork for the type of car the MPH, and its smaller Imp stablemate, were supposed to be and examines the reasons behind Riley management’s internal difficulties to define or commit to the firm’s place in the market. Design, development, the role of the Racing Sixes, technical specs, and complications with nomenclature and head counts thread the needle for an in-depth look at 17 individual chassis detailing ownership history and specific features which take up the second half of the book. List-makers may be frustrated by not having vital stats like chassis, engine, and body numbers etc. gathered in one table.

A closing chapter presents fakes, toy models, competition history, missing/unidentified MPHs, peers/competitors, driving impressions, and some very astute observations about the virtues and integrity of the MPH’s styling especilly vis-a-vis the alleged similarities to Alfas. Each of these items is easily deserving of its own chapter.

The photos are of necessity small and come from a wide variety of period and modern sources, mostly owners and their own history files. All credits are bundled into an Acknowledgements section. Photo reproduction is as good as the source material allows and the paper stock is rather nicer than one might expect of a self-published book. As desirable as it is to have lots of photos, ephemera, or other bells and whistles in terms of design (or an Index!), it is simply unrealistic to have such expectations of a book that doesn’t have the might of a publishing house behind it. Without doubt, this book has the substance to warrant such treatment and deserves a large audience—perhaps one of the publishers among our readers is looking for a worthy project.

A tip of the hat to the proofreader/s—impeccable work!