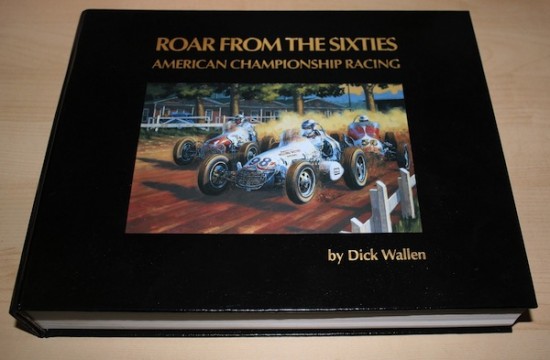 This book appeared ndinn the Fall of 1997, four years after Fabulous Fifties: American Championship Racing, the book that started what would become a trilogy on American championship racing. Roar From the Sixties is a massive, 600-page, nearly 7-pound book with production qualities that very few books devoted to automobile racing come close to achieving. In that regard, it is a typical product of Dick Wallen Productions—top-notch binding, an impressive original painting on the cover, landscape layout, high-quality paper, and hundreds and hundreds of photographs whose reproduction is rarely little short of superb. In the full-page spreads, the details that one can find are amazing but this is equally true of almost any of the other photos, making it an extraordinary publication on that account alone.

It is also a typical Dick Wallen Production inasmuch as Wallen is responsible for layout and design, Michael Jordan is editor and author of the first chapter, and former high school teacher Bob Schilling (the thesis for his masters’ degree was on Rex Mays) doing the bulk of the heavy lifting, i.e. the writing. He also did the 1960–1969 season reviews and the epilogue on the 1970 season, with the box scores and statistics being handled by the late Phil Harms. Parnelli Jones penned the foreword and Johnny Rutherford the first chapter, giving a view of the decade from the driver’s perspective. Dave Argabright provides a chapter on the drivers of the era, and Wallen writes about the Sixties from the viewpoint of being behind a movie camera.

As in the case of the Fabulous Fifties, the present book was a godsend for those interested in American championship racing. While one might be tempted to roll one’s eyes at times as Schilling introduces each season by putting it into the context of other affairs during that year—which often incorporates various cultural markers such as movies and television shows—the season reviews themselves tend to be useful and workmanlike, even if there are times when opinion dilutes fact or that they often seem to stray from the matter at hand. There are no foot- or endnotes and not much a bibliography.

The box scores were constructed by the late Phil Harms with Donald Davidson of the Indianapolis Motor Speedway doing the proofreading for accuracy. Harms credits Bob Mount for assisting in the difficult and challenging process of identifying the chassis and engine combinations. Hard as it is, it must be remembered that once upon a time this sort of data was not a priority for those reporting on the American championship racing scene. Cars were nearly always referred by the name they carried that season, such as the “Bob Estes Special” or even the “Agajanian-Willard Battery Special”, a name that covers two different cars, the A.J. Watson Roadster used on paved ovals and the dirt track car built by Lujie Lesovsky.

Although it is nearing two decades since the publication of Roar From the Sixties, it has remained the bedrock for anyone interested in reading about the United States Auto Club’s National Championship Trail during the 1960s. It was an era during which the American racing scene in general changed, dramatically, with the 1960 USAC season bearing almost no resemblance to the 1969 season, the two seasons being as different as night from day, to use a very appropriate cliché. By the 1971 season, the dirt tracks would be gone from the National Championship Trail, following the front-engined cars from the paved ovals into the past, excised from the present.

From 1960 to 1969, A.J. Foyt Jr. won half of the 10 national championships contested during those years. It is easy for many today to forget just how dominating and truly good Foyt really was at his peak. He also won three of the International 500 Mile Sweepstakes races at Indianapolis. Mario Andretti won three national championships during those years, along with the 1967 Daytona 500 and starting his first world championship event from pole at the 1968 United States Grand Prix held at Watkins Glen. Along with Foyt, Andretti was one of the foremost American drivers of the decade. However, Rodger Ward (1962) and Bobby Unser (1968) also won both the Indianapolis 500 mile race and the national championship during these years. It was also the era of drivers like Bobby Marshman, Jim Hurtubise, Parnelli Jones, Jim McElreath, Lloyd Ruby, Al Unser, Joe Leonard, and Dan Gurney – along with others from overseas such as Jack Brabham, Jim Clark, Jackie Stewart, Denny Hulme, and Graham Hill. It was an amazing era—and few works cover it as well as this book!

No doubt, Roar From the Sixties deserves a spot on the bookshelf of anyone interested in the history of American championship racing, whether as a casual reader or a serious automotive competition historian.

Also available in a Limited Edition of 10 signed and numbered copies with 54 original drivers’ signatures, $1200.