Racing for Mercedes-Benz, A Dictionary of the 240 Fastest Drivers of the Marque 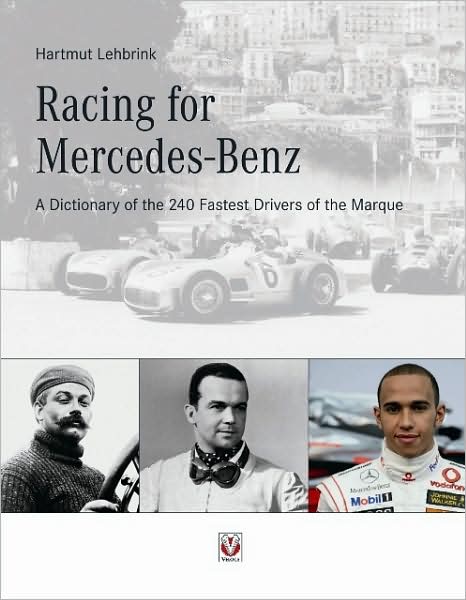 The firm we know now as Mercedes-Benz is among the longest-lived and most storied marques in the automotive firmament. Naturally, racing is a key element in its success, and here, for the first time, is a compendium of the names that made it so.

Published in the 75th-anniversary year of Mercedes’ famous Silver Arrow racecars, this book is the English translation of a title originally published the same year by a German house, Heel Verlag. The author, a decades-long Grand Prix follower and journalist, has written several racing and general automotive books and collaborated on others in addition to his magazine work. This English-language edition is limited to 1,000 copies, but it is not explained what, if any, significance there is to that particular number. Nor is it explained (or really matter) how the author settled on these particular 240 names for inclusion. The subtitle qualifies them by the adjective “fastest” but a close look at the names and stats seems to make that implausible. No matter, 240 it is—works drivers, privateers, professionals, some of them marquee names and others hardly known.

The first three chapters cover three distinctive periods up to 1955, with later chapters divided by type of racing, such as rally, touring, champ car, F1, etc. Even truck racing and F3 are covered, but on only one page. The biographical entries range from a few sentences to several pages, depending on a driver’s place in the overall scheme of things. Just for variety, the longer features are printed on gray background to set them apart. A few entries are rather vague, the most extreme example being that of Eddie Hearne. Admittedly he is a peripheral figure but his entry, while enumerating some of his racing activities, fails to say which of them were in a Mercedes. In fact, it says nothing about his M-B involvement at all! (In other words, a reader is left to infer that the mere fact of Hearne’s inclusion here implies he had something to do with M-B.)

Most entries give the driver’s date of birth/death. Spot-checking on the internet the few that don’t reveals that this is not oversight or sloppiness but that there really seems to be no readily available data in some cases. (What ever happened to the fabled Deutsche Gründlichkeit?) With few exceptions, each entry is accompanied by a photo of the person. To this reviewer it would have been a nice touch if the photos were dated. Looking at the headshots of contemporary drivers it is evident that their freckle-faced likenesses do not show them at their current age, nor, for that matter, do the inferred ages necessarily conform to the age at which the driver raced for M-B. Might a reader not want to know if the somber mien of one Federico Caflish (b. 1892) is that of a 20- or a 40-year old?

All chapters are preceded by introductory remarks calling out specific aspects of that particular era or racing series and M-B’s role in it. Readers new to the early history of racing will get, especially in the pre-1955 chapters, a fairly thorough sense of historical context. However it seems a missed opportunity not to have captioned the several car photos in those chapters more extensively or, in some case, at all! (We suspect we are being shown something unusual in the one photo accompanying the entry on driver Barbarou [b. 1876], shown riding on a chassis with barely any coachwork and also showing him being chauffeured by a woman no less [what a novelty at that time!], but we are not told what we’re looking at.)

The book is printed on very substantial, glossy paper and the photos are reproduced in good detail and contrast. If there is a nit to pick over the photos it is that some, especially car photos, are printed so large as to cross over the gutter. But the book has a flat spine, which precludes the pages from opening fully, thus burying interesting image detail in the gutter.

The book does not explain how it does what it does to the reader, so we will do it here. The term “dictionary” implies an organizing principle, most commonly alphabetical order. And so it is here, except that the book is divided, for the first three chapters, into chronological sections and later on into thematic ones. Each section, within itself, is presented alphabetically. Sounds simple enough—but it requires of a reader to know in what section to look in anticipation of finding a particular name. Example: among the greatest names in racing is that of Ayrton Senna. His name is indelibly linked to Formula 1—and rightly so—but not as a Mercedes driver. For M-B, his main contribution came in Touring Cars and so he is listed in that section and not in F1. If Senna doesn’t ring a bell (off with your head!), the same would apply to soon-to-be-again-current driver, seven-time F1 world champion Michael Schumacher, who is here listed only in the Group C section. Ergo, the index has to be the first stop unless you already know what series in which to look.

Speaking of the index, it contains drivers’ names only, and boldfaced entries denote in-depth treatment, sometimes several pages. The alphabetization of honorifics or hereditary names is inconsistently handled, resulting, for instance, in “von Brauchitsch” being listed —incorrectly—under V in the index but B in the text. Honorifics are sometimes left in German, sometimes translated into English (e.g. Graf/Count). While the next item is not per se a flaw of the index, it shows a lack of imagination. Obviously the book covers female racers. Would not a reader be curious how few women—in 115 years of racing—there are among the 240 drivers in this book? You’ll have to scour the whole index to find their names, which is not being helped by the fact that in some instances only initials are listed for the first names. Never mind that one would have to be familiar enough with European names to recognize Ernes [Merck] as a woman. (To spare you the trouble: there are six.)

Already one more name can be added to the book: for the 2010 season F1 driver Nico Rosberg is joining the newly formed Mercedes team (formerly McLaren-Mercedes), alongside Michael Schumacher who has come out of retirement to race for the marque that gave him his start in the sport. In fact, if this book included karts Rosberg would be listed already, having raced for the MBM team (the talent support program of Mercedes-Benz McLaren) from 1997 to 2000.

Only the quickest, first 1,000, shoppers will acquire those 1,000 English-language copies about M-B’s fastest drivers. After that you’ll have to search it out on the secondary marketplace.

Che’s Chevrolet, Fidel’s Oldsmobile: On the Road in Cuba »
« Of Firebirds & Moonmen: A Designer’s Story from the Golden Age