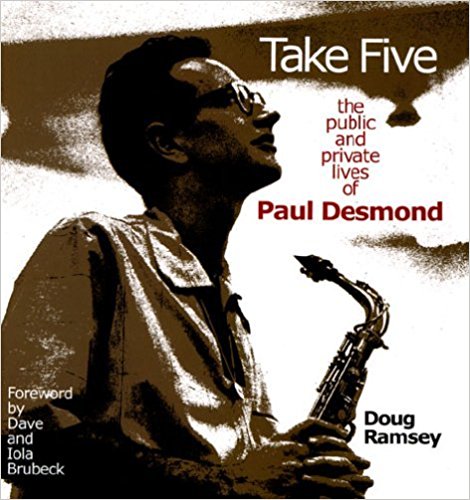 And Paul Desmond. The elegance of his mind is there for us as soon as we listen to him, and repeated playing always bring a new highlight and a smile. He must have been like that to those fortunate enough to have known him. However, the complexities of his relationships were such that the various compartments of his private life were closed until after his death, and at his memorial service various people known to each other had not realized that they had a mutual friend in Paul Desmond.

Every musician of stature should have a biography of this quality! It is in stark contrast to a biography of Ben Webster, of which the kindest comment is that it is the best book about Ben Webster written in Holland and published in 2001. The Desmond biography was written by a friend of many years’ standing, and it shows. Doug Ramsey has written a book which is by no means a hagiography, and the depth of research is remarkable. Ramsey was helped considerably by a trunkload of material that had passed into the care of Paul Desmond’s cousin.

Those of us whose appetite for Desmond’s writing was whetted by the sole published article, How Many of You Are There in the Quartet? which appeared in Punch, and reprinted in the liner notes for his Artist’s House LP, can revel in the many letters he wrote to his father. His relationship with his family is most interesting, his mother’s psychological problems perhaps partially explaining his close guarding of his private life, and his father’s talent for music composition, performing, and publishing shows a link from that family’s Mittel European origins to Paul Desmond’s wide musical knowledge, and his eventual skill in expressing it through his very personal interpretation of jazz music.

This is a large book, in landscape format so that the photographs, lavishly spread throughout, have the maximum effectiveness, with the quality of the original material varying from superb to rather obvious digital scanning.

A side note: the publisher, Parkside Publications, is of course renowned for its superbly important Alfa Romeo books by Simon Moore.

Posted Under: Biography, Music, Other Genres | Author: Tom King | No comments yet