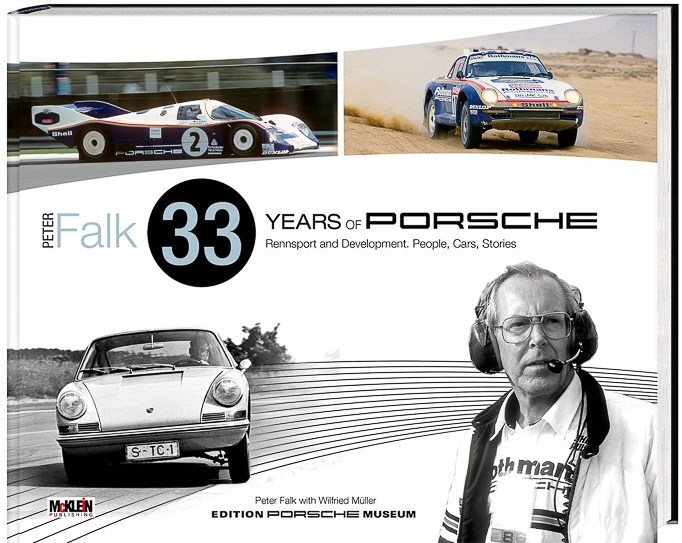 “Strictly speaking, it couldn’t have been any other way. Already as a youngster, Falk increased the wheel travel on this three-axle Schuco model car using drills and a nail file.”

Gotta love a book title that really does say it all! From kid mechanic to Porsche’s most successful motorsports chief ever, that’s the most excellent story this most excellent book tells. Even someone without any Porsche leanings will find this story, this life worth knowing as it touches on a multitude of subjects that dot the landscape of global motorsports.

“Falk talks . . . at last”, that’s ho co-author Müller kicks off his Foreword. Falk, who started with Porsche in 1959, turned 86 this November, so, yes, it is high time that someone got this “tall, quiet type” to finally sit still long enough to do a book. Those who don’t know it already will quickly come to discover Falk to be the consummate team player, quick to deflect the spotlight from himself to the collective effort. Temperamentally, he was ideally suited to cope with the corporate culture at a small carmaker that needed to carve out a place for itself in the world, meaning swim or sink are as much of a reality as not letting bureaucracy stand in the way of innovation.

A few background notes that the book does not mention are in order so as to better grasp its value. It is no coincidence that it is Wilfried Müller (b. 1954) to whom Falk talked. (The book is essentially an interview, or, better, a dialogue.) For one thing there’s the Porsche connection. Müller’s pretty much lifelong interest in automobiles and motorsports led to Porsche hiring him in 1993 as freelance Press Officer for the Porsche Supercup, an F1 support race, and then later let him hang up his traveling hat and made him Press Officer for the Porsche Tennis Grand Prix–Ladies Tournament, and later still, after moving his family to his wife’s native New Zealand, hired him to do special writing/research projects for cars in the Porsche Museum. If you read Christophorus or Porsche Klassic magazines you’ll recognize his byline. No surprise then that this book is published in cooperation with Porsche AG. Then there’s a previous connection to this publisher: in 1987 renowned rally photographer Reinhard Klein, who started the firm, hired him to follow the World Rally Championships and write a book about it.

When we first saw the Falk book when it came out in 2016 we didn’t schedule it for review, even though it was available in both a German (ISBN 9783927458864) and an English version, because this German publisher had at that time no US distributor. It always frustrated our readers when the few McKlein books we did review proved difficult and expensive to find in the US and this has changed only now, in October 2018 when US publisher CarTech became their US distributor. That the book was available in English at all is, incidentally, thanks to Müller marrying a native speaker who has here rendered a very readable, fluid English text. There is one other reason we initially didn’t review the book: some of its best parts are only in German, even in the English version. These are the memos (below) and other writings by Falk that are appended at the back of the book, such as “Words for Wheel-Whisperers” that in dictionary form explain the terms he regards as “the life elixir of the suspension engineer,” or “Thoughts on Agility” that circle around the essence of a sports car, or handwritten pace notes from the 1965 Rallye Monte Carlo and many other gems.

The challenge of presenting a book as a conversation is here solved in an interesting and effective way: much like in any single-voice book the narrative advances along thematic and chronological lines but here manages to seamlessly weave the Falk and the Müller bits into one cohesive, fluid whole by interspersing Falk quotes (in italic and/or boldface) right into Müller’s overarching narrative. This is less jarring than, say, a Q+A format but obviously requires a special skill on the part of the main writer, and trust on the part of the interviewee. Falk, it should be noted, was himself early on no less adept with the pen than the wrench. It is also noteworthy, and uncommon, that Falk first signed himself up for a 4-year university program but then preceded that by an apprenticeship as a motor mechanic (at Mercedes Benz) to gain hands-on experience; usually it is one or the other.

There is not a dull page in this book, and not only because Falk has a well developed sense of humor. Obviously there are deep layers of background pertaining to all the people, cars, tracks you know and love and, of course, engineering issues. Some things may well be surprising to the casual reader, such as Porsche management stoking rivalries among the drivers to keep them on the edge but then requiring of their engineers to work “extra close” together in the name of the greater, common good. But there are also countless smaller matters, anecdotal bits such as everyone on the team that in 1971 flew the VW prototype to South Africa for testing being allowed to have a turn at the control of their Lockheed Constellation airplane, or how driving an Audi Quattro in 1981 “immediately” led to the decision to build a 4wd Porsche, the 911 Turbo 3.3 4×4 cabriolet that became a such a hit at its launch a few months later.

In landscape format, the book is generously illustrated. A good deal of the material is from Falk’s archive and thus new to the published record. Other items are sourced from the Porsche Historical Archive and from publisher McKlein’s own, deep archive.

As we said already, if you are not a Porsche person, not to worry, this book has plenty of relevant stuff about engineering, life, values, motorsports, and working in a small company among hyper-focused colleagues. If you are a Porsche person then this book deserves a spot among your Top Ten marque books because coming, as it were, straight from the horse’s mouth, it buttons up innumerable matters large and small that piles of other books make reference to.

If you are only now discovering McKlein books, prepare to be impressed by good design, high production values, and worthy topics. (But, typical; of European books, no Index.) CarTech made a good choice to let this one be in the first batch to bring to these shores.