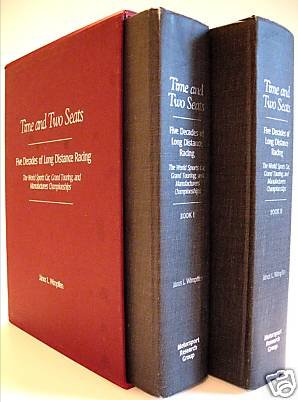 János Wimpffen is a academician in his 50s with a doctorate in geography and an interest in baseball statistics who has written a 2,300 page definitive history of more than fifty years of Long Distance Racing. Organized in two volumes, the work is an era-by-era, year-by-year, race-by-race narrative of sports car and grand touring races between 1953 and 1998. This book isn’t just a rehash of major events like Le Mans, Daytona and Sebring. Wimpffen has the complete list of the hundreds of entrants from events like the Mille Miglia and the results from obscure sports car races from the fifties and early sixties. How did this mild-mannered geographer become one of the world’s experts on endurance racing?

János was born in Austria, but was raised in Chicago. Like most kids in the sixties, he grew up following baseball and that almost unique form of fan participation, baseball statistics. He points at 1966 and the ABC Sports coverage of Ford’s victory at Le Mans as a turning point in his life. “Jim McKay was reporting the finish at Le Mans and here was a kind of racing I knew almost nothing about.” Wimpffen had discovered sportscar racing and began spending weekends at Elkhart Lake’s Road America. He even did some club racing with a Triumph before his studies began to interfere. His fascination with sporting statistics spilled over into racing, but to his amazement, racing had almost nobody who cared about collecting numbers, facts and dates.

Wimpffen continued his real-life job, achieving a doctorate in geography and becoming involved in transportation planning, first in the private and public sectors, and later as a consultant. But, from the late 1970’s, he held in his heart the idea for a book of statistics about auto racing. He had retained an interest in racing, particularly Formula One, but endurance racing still held his primary interest. By the end of the 1980s, János had begun compiling the data that would eventually form the basis for his two-volume work.

By the early 1990s, János Wimpffen realized he would need to work full-time in order to create the book he was looking for. But working full-time on a history of endurance sportscar racing doesn’t actually pay the bills. Wimpffen needed backers to go ahead with his project. “I had already done research and written some histories of individual cars for collectors in the Northwest. At least among some circles, I was known,” recalls Wimpffen. The big break came when Bruce McCaw, telecommunications giant, PacWest Indy car team owner, and well-known vintage racing car aficionado agreed, along with several others to back the project.

The next step was collecting the data. “I figured I would just go to the various circuits and get the results for each of the races,” admits Wimpffen. It wasn’t that easy. Very few racing circuits had any sort archives with usable information. “I went to the FIA in Paris. They received me very politely and tried to be helpful, but they only had limited information.” The FIA had been organizing sportscar and grand touring championships for more than thirty years, yet had little in the way of real statistical data. Finally, almost in desperation, Wimpffen turned to the teams, drivers and entrants who had been involved in racing over the almost five decades his book would cover.

But a funny thing happened. By talking to the teams, Wimpffen kept turning over stories. Stories that had never been heard before, about the early days of endurance racing. “I would call a team owner to confirm a fact or get a small piece of information. Time has a way of embellishing or erasing things, yet if you talk to enough people, you can put things together. I would get the information and just be about to hang up when the team owner or driver would suddenly go into an amazing story about the race.” With all of these interesting anecdotes and stories, the book began to change in Wimpffen’s mind. Originally, he had envisioned a very dry compilation of racing statistics. But now, with recollections of those who had been there, a more narrative history began to form.

And so, Wimpffen’s book began to grow. Each circuit race, hillclimb and even rally events like the Tour de France that counted toward the sportscar or grand touring championship resulted in another story. Abarths, NSUs, and BMW 700s, mixed with Ferraris, Porsche 904s, Ford Cobras and GT40s. MGs, Sunbeams and TVRs competed with Alfa Romeos, Chaparrals and Lolas. It was a wonderfully chaotic time when the cars were as different as charismatic as the people who raced them.

With the stories came the photos. Works of famous photographers of the period like Cahier, Goddard and Friedman, but also unpublished images from dozens of others. Using an ancient database program, János began the painstaking process of compiling the charts, sifting through the stories and matching the photographs. Four years later, the process was completed andTime and Two Seats was a reality. More than 2,300 pages. More than 600 photographs. Diagrams of each racing circuit. And names. Famous names. Obscure names. Even the assumed names and nicknames that racers would drive under. Three forwards, from Phil Hill, Brian Redman and Derek Bell.

For János Wimpffen, the most enjoyable part was the writing. “All I had written in the past had been highly technical papers for my profession. This was different.” Perhaps that is the most surprising and delightful part aboutTime and Two Seats. It turns out that Wimpffen can write. His stories are from the insiders and reading them makes you feel like you were there, an active participant in each of the eras the book covers. His analyses of the changes that the sport have undergone are also insightful and reflect that greed and politics and the human desire for recognition are sometimes more important than technology and progress.

Although more than 600 photos were used in his first book, there were still many hundreds more for which there simply wasn’t space. So Wimpffen created an album of these images that will cover the same fifty years that his book has chronicled so well. Other books followed, which is a good thing as he self-published the first book which sold for $150. It is no longer in print, but can sometimes be found by rare booksellers.

János Wimpffen reengineered his life and dedicated himself to a pursuit of automotive history. Few would have the determination and perseverance needed to accomplish such a monumental work. Wimpffen did and automotive historians and racing enthusiasts are grateful for his passion.