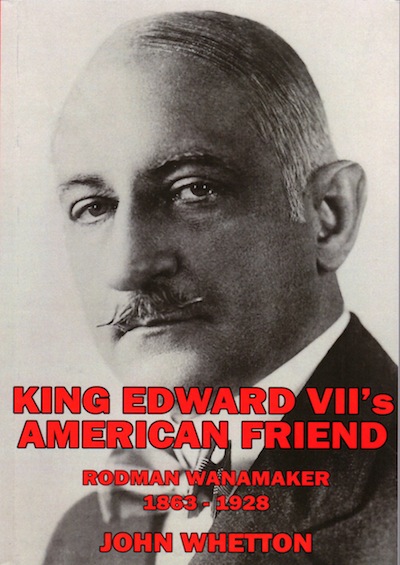 This tiny booklet is not nearly sufficient to portray this American department store tycoon’s multitude of interests, activities, and associations. He was an early backer of aviation, especially long-distance flights.

Author John Whetton owns one of the last of at least ten Rolls-Royces owned by department store magnate Wanamaker and became attracted (appropriately enough) to the magnate’s life. This book is a heroic account of Wanamaker’s business life, his involvement with King Edward VII, and his many acts of public generosity. If you’ve been to his former store in Philadelphia, now Macy’s, and seen the world’s largest organ in the atrium then you’ll know the qualities of this man.

As an anglophile (and francophile) Wanamaker spent a lot of time in Europe during the Edwardian and belle epoque heyday, and into the early postwar years. These were the years in which American collectors gathered up European masterpieces and British aristocrats married wealthy American heiresses. King Edward VII had a wide social circle and in his time the old snobbishness towards the “trade” was reduced, especially if “trade” meant “super rich”! Quite how Wanamaker entered the circle isn’t clear but he was close enough to the King and Queen to receive an honor and years later he was particularly generous in giving stupendous silver religious furniture in their honor to Sandringham church.

Wanamaker’s involvements were many: funding aviation pioneers, promoting sport such as the Millrose Games, a monument for the native American Indian, amassing a fine musical instruments collection, and many philanthropic acts. The Rolls-Royce element of the book is thus a smaller portion of the whole story but it makes epic reading. His son John was also a multiple Rolls-Royce owner and both men stayed loyal to Barker coachwork. It’s quite a story!