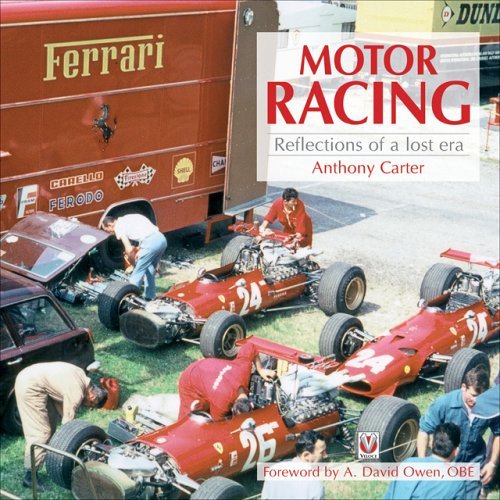 You may already have stacks of books on European GP motor racing in the 1950s to the 1970s—and you still wouldn’t have seen these photos. Taken by an amateur photographer strictly for his own entertainment, they were never intended for publication. Were it not for moving house several decades after taking, filing and pretty much never looking at the negatives again, the author may well have all but forgotten them were it not for an inquiring young mind, his son’s, that prompted him to sort them which in turn spawned the idea for this book. So not only are these photos new to the record, what further distinguishes them is the subject matter. Yes, those were the days when there not yet any security and safety concerns that restricted access and pretty much anybody had access to pretty much anywhere on a racetrack but the reason Carter took the sort of photos he took was his equipment and so we should devote a few words to the camera.

Not being a media professional and without an expense account, he made do with a basic but for its day quite good compact camera, an East German “Werra” made by Carl Zeiss of Jena. It had several unusual features (such as its control buttons, shutter, and film winder) and won awards for its sleek minimalist design. It came with different optics; Carter says his had a Tessar 50mm f/2.8 lens (ergo a No. 8073099, coated). But the fastest shutter speed was 1/500th of a second, too slow for action shots. So, Carter made lemonade out of lemons and trained his camera on things that didn’t move too fast: paddock activity. So, here you have that slice-of-life behind-the-scenes sort of documentary photography to complement all your racing photography books.

Carter may have been an amateur photographer—not that you could tell from the photos! One would have to be uncharitable in the extreme to find nits to pick with his composition, framing, execution: these are not “snaps” made by someone who unthinkingly points his camera at the wilderness—but he was a dyed-in-the-wool motoring and racing enthusiast. Growing up in a family in which both parents owned and liked cars that were more than just basic transportation (an oddity for the time on both counts!) he started attending races already as a schoolboy. Later, he interrupted his first stab at a professional career in the insurance industry by answering an ad from the British Racing and Sports Car Club that was looking for someone to schedule the marshals for its race meetings. While this got him closer to racing it also took him away from racing (you can’t work one race while you really want to be at another) so he turned in his BRSSC badge after six months and returned to his former employer. The reason to explain all this is to underscore the point that Carter is a true enthusiast who loves the subject matter—and this book is a testament to that. He traveled on his own dime, when and where he could, camera in backpack. So, keep that it mind before you carp that the book doesn’t cover every race under the sun or devotes several pages to one and only a single photo to another.

Carter covers the years 1956–1979; most of the events are in Great Britain, France, Belgium, and Germany. Each chapter is introduced by several pages of remarkably solid commentary about the season, state of racing, and personalities. He credits Stirling Moss and Phil Hill with explaining to him “how it really was.” The very nicely written Foreword by A. David Owen, eldest son of Sir Alfred Owen whose company Rubery Owen Holdings controlled British Racing Motors for most the team’s life, applauds—rightly—the author for “completely capturing the spirit of the ‘lost era’”. The photos are large and sharp but the reproduction is sometimes grainy. There are also photos of two visits to the Ferrari factory (1967 and 1995). On occasion later-day photos are interspersed with the chronological coverage, for a “then/now” effect.

There is a Bibliography and the Index even lists cars by type, a nice touch! Cleverly, the endpapers (different in front and back) are a collage of period newspaper clippings, setting just the right tone. This is the second edition of a book first published in 2005 and contains some additional text.