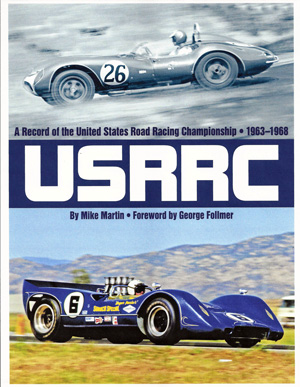 Although there still appears to be a seemingly endless stream of new books on GP and F1 racing, the Indianapolis 500-mile race, and any number of NASCAR-related works, only a few are superb. Some are beyond wretched, others are either eminently forgettable or the source and inspiration for further research. Most are somewhere in the middle.

Among the many choices for racing topics there are a few that remain orphaned, meaning they have either fallen out of fashion or were never in, possibly because they are too esoteric or difficult to research or, just as likely, a publisher simply doesn’t see a market for it.

The Canadian-American Challenge Cup Series began in 1966 and ended in 1974—but it took 20 years for a proper book to be written, Can-Am (Motorbooks International, 1995) by Pete Lyons (with lots of help from his wife, Lorna). Although Dick Wallen has published three volumes that cover the national championship during the 1950s, 1960s, and ‘70s, one can search bookshelves and catalogs in vain for much of anything even remotely close to being similar on this topic. While certainly admirable for at least making an effort, Formula A and Formula 5000 in America (2004) by Wolfgang Klopfer leaves a bit to be desired, unfortunately. Pick a reason: it completely omits the 1967 season of the SCCA’s Continental Championship and provides only the Top 1o finishers for each event. Even the history of NASCAR’s Grand National and Cup series gets short shrift, there still being nothing even remotely approaching what Greg Fielden has done with his Forty Years of Stock Car Racing series: Vol. I, The Beginning 1949–1958 (1988); Vol. II, The Superspeedway Boom 1959–1964 (1988); Vol. III, Big Bucks and Boycotts 1965–1971 (1989); Vol. IV, The Modern Era 1972–1989 (1990); and, a supplement, Forty Plus Four 1990–1993 (1994). Then, there is John Starkey’s Racing With A Difference – The History of IMSA (2001), which is really anything but, to put it mildly. As for the Trans-American Sedan Series, the Trans-Am, fortunately both Al Bochroch’s Trans-Am Racing 1966–1985 (1986) and Dave Friedman’s Trans-Am: The Pony-Car Wars 1966–972 (2001), have provided at least something on the series. All in all, it can be clearly said that the coverage of the US scene in terms of its important national series tends to be both sparse and lacking.

Thus, the arrival of Martin’s book is a cause for joy. That the USRRC existed for only six seasons and then managed to be lost in the mystic chords of memory due to the Can-Am series and then the IMSA Camel GT series hogging the limelight means that relatively few today even recall that there ever was such a thing as the USRRC.

Thanks to Martin, the USRRC at long last has a book dedicated to it—and an excellent book it is. The production values are outstanding. The book comes in a bright blue box with the title emblazoned upon it in silver. Classy. The book is big (9 x 12 inches) and heavy, being printed on heavy stock that facilitates excellent photo reproduction. The size allows for lots of photos, and large enough to reveal useful detail.

The contents, too, is substantial. Martin has put forth an effort to not simply produce a nice-looking book but one that has intellectual heft. There is no doubt that he has done serious research and even managed to weed out typos and the usual production glitches that seem to always somehow slip in.

Each of the six USRRC seasons and each of the 52 events (which includes both the driver and manufacturer races) within those seasons get their due. In most cases, the covers of the programs are shown. If there were separate races run for the driver and manufacturer champions at an event, they are both given a separate race report and results table. The results are as complete as possible, and if known, include entrants that did not start. In today’s day and age when race data is readily available, it is easy to forget that so often in the olden days certain things simply didn’t get recorded, somehow (cf. number of laps completed).

The only quibble regarding the results is that the reasons for DNFs are not given, nor are they always provided in the race report. Considering the overall scope of the effort, this is a very minor point, especially in light of the fact that sometimes the reason for a car not finishing was either not known or even not given; or, that on occasion, the reason given and the actual reason may have been at “variance with reality”—the rod sticking through the block being chalked off to a shock absorber problem. Martin wisely chose to not worry about chassis numbers, a problem at the best of times and often enough a true cans of worms.

A brief note about a half dozen or so of the hundreds of photos: readers with an attention span will notice that some are used more than once. Not ideal, no, but remember that record-keeping and photo-taking were not an organized, systematic effort in those days. If Martin and his cohorts weren’t able to source just the perfect photo for any one little thing, it’s not for lack of trying! In those case were a photo did have to do double-duty, the caption is rewritten to fit the respective contents. All good.

To say it once more: this is an excellent book! Being very familiar with both the series and the era, I must give Mike Martin heartfelt kudos for not only finally giving this series its due, but doing so with a book that is both well-presented and well-researched, a difficult combination to achieve.

It was a very, very long wait for something on this order but it was certainly worth it. Limited to 1000 copies.