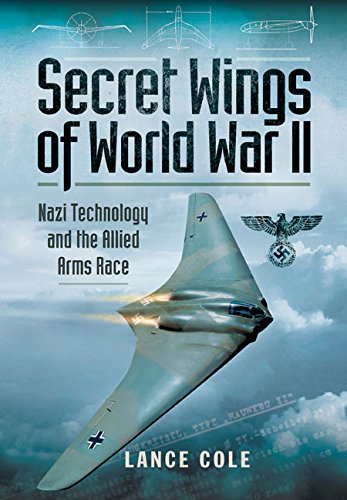 “The UFO story is a paradox, for we are told by rational learned men that UFOs do not exist and believers in them are conspiracy theorists and liars—yet this part of the UFO phenomenon itself was actually deliberately designed and delivered as a ‘lie’ by those learned men in order to shield the stolen German science they were developing.”

“The ultimate irony must lie in the fact that, during the Korean and Vietnam wars, respectively, Germany’s advanced ‘wonder weapons’—its technology—were actually tested in combat by the airframes that the Americans, and the Russian-supplied Chinese and Vietnamese had built using that very German technology.”

These two quotes represent two of the key building blocks of Cole’s argument. The first quote, in the Introduction, is preceded by the words, “This book is not about UFOs and does not deal in delusions or fashionable conspiracies, yet neither does it support the establishment version of aerospace history—one created by a narrative of victory and its own prejudice.” The book, truly, is not about UFOs per se, at least not the alien-technology kind, but it is a difficult onion to peel.

From a PR perspective it seems a bold move to begin a book that depends on the reader’s willingness to give it the benefit of the doubt with a pages-long rant about government conspiracies—and not just the usual suspect, the US, but Russia, England and France too—that were invented simply to avoid acknowledging that the Germans had it all done before. . . . Almost as bold as an organization selecting a name for itself only so that the acronym reads TWITT (The Wing is The Thing) to which the author expressly offers an acknowledgment. People as high up in the aviation world as NASA Chief Engineer Al Bowers have been guest speakers but the question of whether the wing is in fact the thing remains as much a fringe topic as the TWITTs themselves.

Not so for Cole. To say he loves flying wings would be an understatement. Even one wing that wasn’t an all-wing but attached to a conventional center-fuselage aircraft (the Spitfire with its game-changing elliptical wing designed by Beverley Shenstone) moved him sufficiently to write a properly good book about it. But after reading Secret you won’t be able to stop thinking that Cole pegs Shenstone as an enlightened fellow simply because Shenstone, a Canadian, had studied in Germany under some of the German luminaries whose secret sauce was so potent that much of what they dreamt up was so advanced that knowledge of it had to suppressed after WW II by concocting the whole UFO/alien technology cover-up.

Cole is an aviator and a writer and a designer; he was the 1983 Sir William Lyons Scholar; he has contributed to many mainstream automotive and aviation magazines and broadcast venues; he has several nonfiction books under his belt. Meaning, he is not a crackpot. If he were more of a lawyer, he might have done a better job of presenting his case to us, the jury.

If there is a fundamental angle it is this: How far ahead were the German scientists? And how did they get there? If you have never ready anything else on the subject, you will find Cole’s case so watertight that you’ll join him in thinking that the only reason the institutionalized aviation (and political) world is not singing from the same hymnal is fear, pride, prejudice, lies, cover-ups. At worst, you may find sentence structures that sometimes allow ambiguity—and critics will zero in on that and want to dismantle the entire argument. If, on the other hand, you consider yourself well-read on the subject, you’ll have to put forth a mighty effort not to grind your teeth when you look in vain for, say, a straightforward appraisal of Jack Northrop’s flying wing (p. 186: “. . . the Horten Ho series . . . demonstrated aerodynamic and structural details that have, without any doubt, informed later all-wing American practice, notably in the form of the Lockheed F-117 ‘Stealth’ fighter and the Northrop Grumman B-2 all-wing bomber.” From the Russian Mig-29 to the French Fouga or the British V bombers, all based on concepts first (only?) articulated in Germany.

Four b/w photo pages make up a center section while entirely rudimentary b/w line art of airframes is sprinkled throughout. Chapter Notes are bundled at the back of the book. The Bibliography is surprisingly wide-ranging and two Appendices present acronyms and names of German and Austrian scientists. Useful as this material is, whoever compiled or typeset it needs to be sent to the salt mines; the butchery of words and names defies explanation! The Index, too, qualifies for that adjective, surprising.

After multiple readings by multiple reviewers we remain entirely undecided. The book is cheap enough to just give it a try—but you’d probably want to invest at least as much in a bottle of strong drink.

The Road to Pickletown »
« 312 P: One of Ferrari’s Most Beautiful Racers