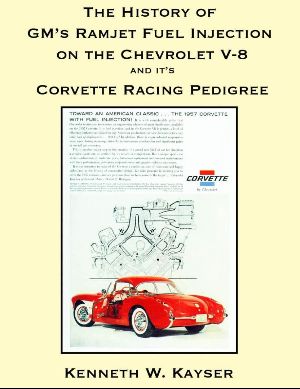 Numerous Corvette and Chevrolet histories include mention of the development and application of GM’s RamJet fuel injection during the 1950s. This book, however, is the first standalone that focuses on The History of GM’s Ramjet Fuel Injection on the Chevrolet V-8 and it’s [sic] Corvette Racing Pedigree. Ken Kayser, its author, can easily be described as the ultimate insider for his 40plus year career was spent as a GM engineer.

Kayser graduated from GMI where his attendance had been sponsored by the Tonawanda Motor Plant Complex which thus became his first employer. Later he added a Masters degree in Business Administration to his Bachelor of Engineering. His career experiences gave him insights and the abilities to source photos, documents, and patent drawings while also helping GM’s archivists—whose training is in library sciences not engineering—identify some of their holdings.

Utilizing these documents, Kayser relates the history that led up to GM starting the development of its fuel injection system. Rochester Products Division took the lead but also involved the corporation’s Research Laboratory, its AC Spark Plug and Packard Electric and Delco-Remy divisions. As the story unfolds, development really never stopped for, as Kayser documents and details, the running changes took place with dizzying frequency right up until the program ended. Narrative, combined with work orders, parts numbers and dates plus engineering and patent drawings, create this compelling look inside GM’s daily operations. 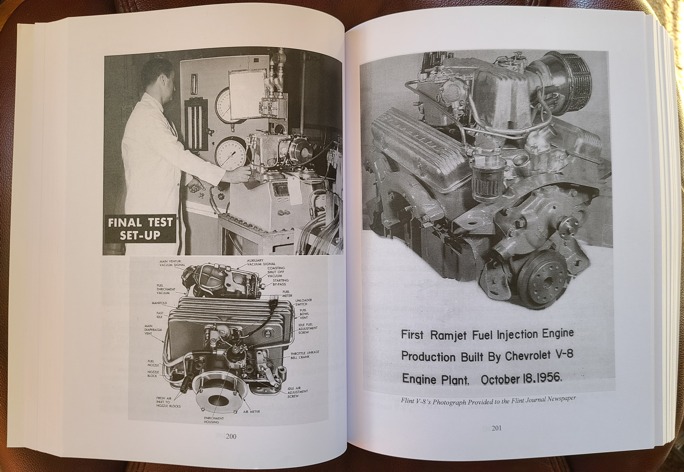 Just as the words on the right hand page indicate, you’re looking at the first-ever GM production engine equipped with Ramjet fuel injection and, on left, a final test of the injection apparatus.

As I read one thought kept recurring; this book is precisely the documentation every owner and restorer of a RamJet-fed vehicle needs, as does every Bloomington Gold and Corvette authenticity judge and many class judges—especially as the changes documented are not limited to just under the hood.

Other divisions used Ramjet technology including Pontiac which issued its own publication for 1957 as it was featured on Bonnevilles. Chevrolets for ’57 that could be outfitted with extra potency underhood were One-Fifties, Two-Tens, Bel Airs along with, of course, Corvettes.

As Kayser writes it is now, “sixty-five years since Chevrolet Motor Division proudly announced the advent of the first mass produced automobile engine capable of generating an incredible one horsepower per one cubic inch of displacement.” Later he acknowledges that it came to be, “Originally thought of as an unreliable contraption and disappointing technological blunder. . . . Today it is an awe inspiring, highly desirable and prized, collectors dream!” He goes on to observe that, “From an inauspicious start in 1956, GM’s Ramjet fuel injection was unceremoniously phased out in mid-1965, favoring the larger, lower cost per horsepower 396cu in V-8. . . . Fuel injection would not debut again on a major Chevrolet product line for another 20 years! Chevrolet introduced multi point fuel injection (MPFI) on the 1985 Chevrolet 2.8-liter V-6 and the Corvette 5.7-liter V-8. . . . By 1986 fuel injection would prove its dominance.” 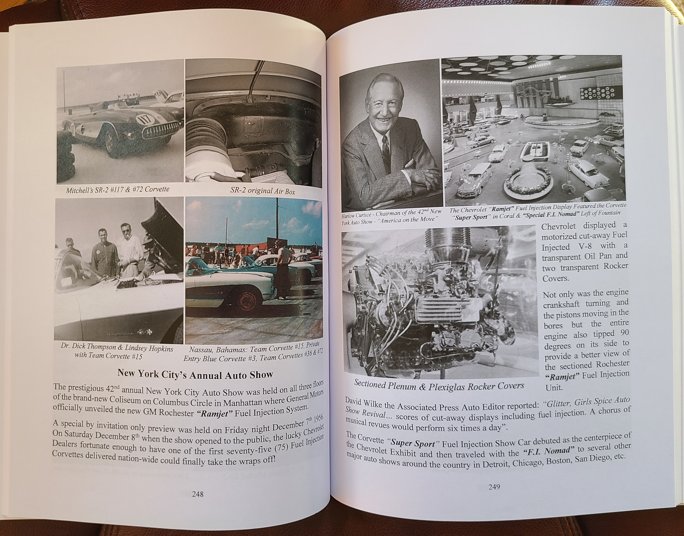 Every page isn’t technical for, as seen here, top left, is Bill Mitchell’s SR-2 alongside its original airbox and beneath Dick Thompson and Lindsey Hopkins and the #15 Corvette in Nassau. On facing page Harlow Curtice is beside what was on display at the 42nd NY Auto Show and the engine displayed there.

The entire book isn’t just or all technical for Ramjet’s story involves people with name familiarity. Examples: Zora Arkus-Duntov, John Fitch, Carroll Shelby, Betty Skelton, Dr. Dick Thompson, Dick Guldstrand, Ed Cole and others. There are some who played big roles but didn’t quite attain the same level of name recognition. A reader gets to meet and know some of those such as John Dolza, Harry Barr and Louis Cuttitta, on this book’s pages. 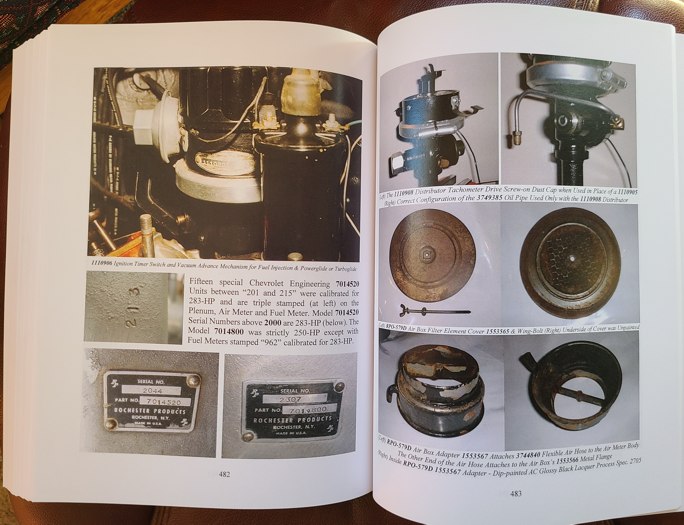 These two two-page spreads, above and below, are from the appendix that is all photographic detail of various components of Ramjet fuel injection. 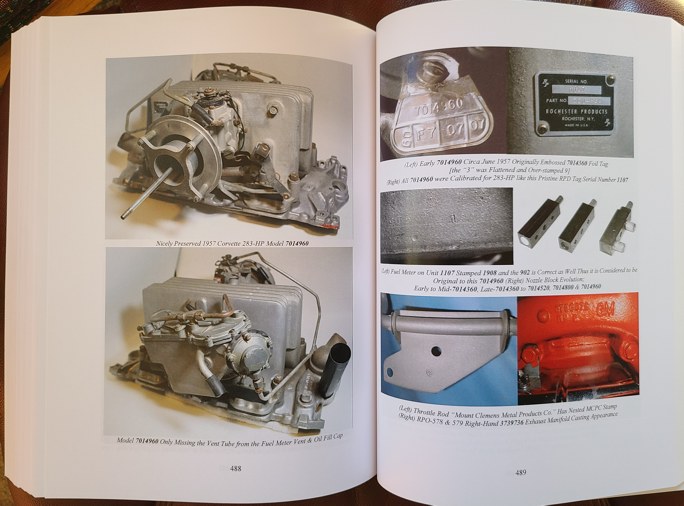 Readers also get to see the races at Nassau, Daytona Speed Weeks, Sebring, the 1956 New York Auto Show and are present as the SS undergoes wind tunnel evaluations. The concluding appendix contains some 200+ clear and readable reproductions of the actual engineering drawings, patent applications and more. And the appendix preceding it is all photographic detail that will be appreciated by every historian, engineer, car owner, restorer, car show judge or interested enthusiast. 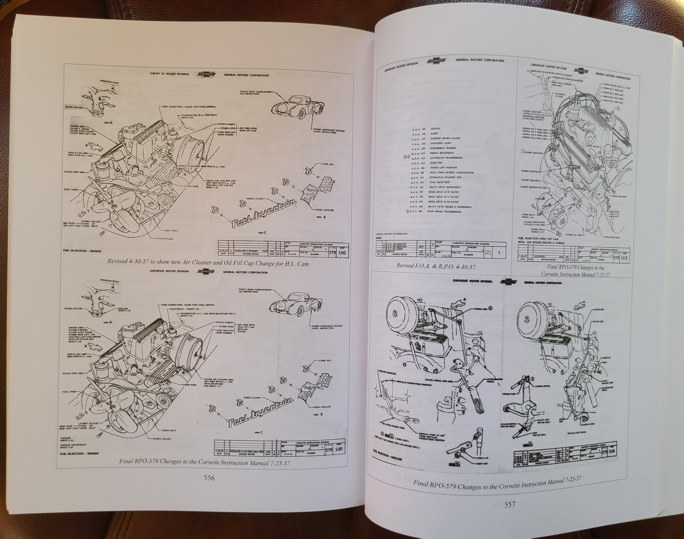 These two pages show the quality and caliber of detail in the just shy or 100 pages that reproduce well over 200 engineering drawings related to Ramjet fuel injection.

This expanded 2nd edition completely supersedes the 2007 original. The new edition is going to be a print-on-demand book and is expected to be available for shipment on/by April 1, 2022.

Posted Under: Automobiles, Technology, US | Author: Helen Hutchings | No comments yet