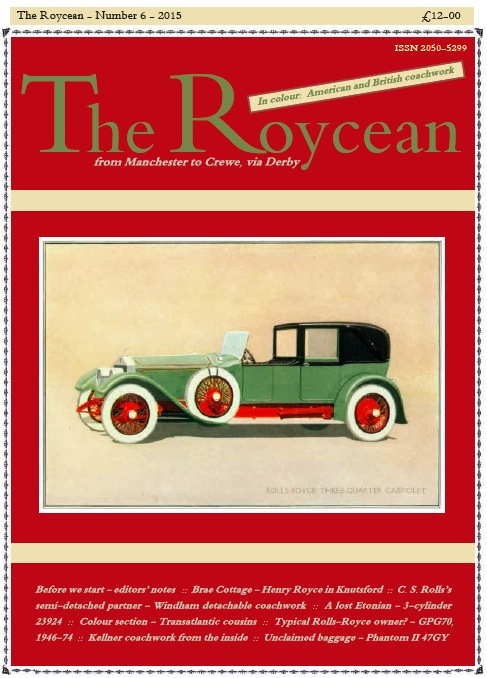 Now six years old, The Roycean is becoming a veritable institution—only to be downgraded from an annual to an “occasional publication with no fixed dates” due to difficulties in sourcing suitable contributions and vetting and editing them. Five of the six features in this issue, in fact, came from the editors’ hands.

Not counting a color section of reproductions of coachwork drawings (from Rolls-Royce of America [1922], Thrupp & Maberly [1926] and Hooper [1927/28]) the booklet contains the sort of learned articles that are a hallmark of the publication. If there is a theme, which would be accidental anyway, it is one of people and places in the Rolls-Royce story. From a room by room tour of cellar to attic in Henry Royce’s home Brae Cottage (expensive digs, and not at all cottag-y!) to adoptive children to business partners, The Roycean adds both granular details within details and totally new information. Among the latter must count the elusive 3-cylinder 15 hp car of which only six were sold. Here the third chassis, 23924, is discussed.

Elsewhere are featured Windham Detachable Coachwork, the driving and car-owning habits of a Scottish gentleman we first met in last year’s issue, the interiors of cars bodied by the French firm Kellner, and the ownership history of 1930 Phantom II 47GY, which, in a Roycean first necessitates the use of “deleted expletives.”

As always, a lengthy section at the start deals with miscellanea, this time mostly photo postcards and aero-engined cars (this year being the centenary of the V-12 aero engine).

The Last Days of Henry Ford »
« The Red Baron