W.O. Bentley: The Man Behind The Marque 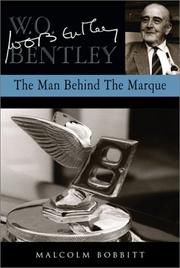 Bentley is one of the most storied marques in British history. Despite its racing successes, more precisely because of them and their drain on the corporate coffers, Bentley did not survive the Great Depression as an independent marque but rather found itself the neglected stepchild in the Rolls-Royce family which had bought Bentley in the main to thwart the competition and to keep Bentley from joining forces with Napier.

Malcolm Bobbitt is a full-time writer, specializing in popularized books on motoring subjects. He approached the Bentley Drivers Club early in 2002, seeking co-operation for a biography of WO that a publisher had asked him to write as one in a series of such titles.

The Trustees of the W.O. Bentley Memorial Foundation felt that, on balance, the publisher’s requirements would not allow the criteria that the Trustees considered essential for balanced reporting and sound scholarship to be met.

Bobbitt persevered and produced what the book jacket describes as the “First full biography of the founder and inspiration behind Bentley Cars,” although some would argue that Donald Bastow’s 1978 W.O. Bentley—Engineer was a biography. Like the curate’s egg, the new book is good in parts. Bobbitt’s original research turns up much new information but, to meet his publisher’s word count, the narrative contains much creative and imaginative text attributing emotions, dialog and the like, to the figures in the story. This padding gets in the way of the history.

The author has researched WO’s schooldays and his family history, and tells us much about the great man’s early life. WO’s pre-WW I life and career are well documented, with one or two photos that we have not seen before. Two chapters deal with WO’s unhappy time with Rolls-Royce after that firm acquired his—and his “services”—at auction in 1931, his subsequent much happier and creative work at Lagonda, and his consultancy work after WW II. There are rather many irritating errors, from the drastic (a photo of Blower 4½L chassis SM3908 is captioned as an unblown car with an entirely different chassis number) to the trivial (Glen Kidston allegedly dying in a flying accident in a Tiger Moth, not a Puss Moth). These errors have simply been lifted in bulk from previously published references that form much of the book’s content.

Five pages cover WO’s divorce from his second wife Audrey in 1932/33, the details of which have never been known by the general public, but were on file at in the Public Record Office. Some readers who knew WO and his wife Margaret, both of whom were actively involved for so many years in the Bentley Club world, may find this material distasteful. Worse, a reader may very well suspect prurience at work.

There is but one reference to the Bentley Drivers’ Club (the apostrophe is incorrect) yet Stan Sedgwick, club president at the time and a key figure in the Bentley world, personally saw to it that WO was active in the BDC during the last 25 years of his life; WO was in fact a Patron of the Club from 1947 to 1971 and considered it of great personal and professional meaning. The book, incidentally, refers to BDC members as “Bentley enthusiasts.” A Freudian omission?

In sum, an interesting book and a good read, “. . . but unfortunately the text is littered with errors and this detracts from the narrative . . .”—for the most part not to be regarded as in any way an authoritative work of reference. The quote, incidentally, is taken from a review of a companion volume of Bobbitt’s on a Rolls-Royce subject. Someone might usefully consider publishing a list of corrigenda; the name Hay springs to mind.

Copyright 2010, John Nutter & Hugh Young (speedreaders.info).
(First published in the Sept./Oct. 2003 issue of The Flying Lady, the periodical of the Rolls-Royce Owners’ Club (RROC/USA). Both reviewers knew WO; Young was a long-time editor of the Bentley Drivers Club magazine and the late Nutter the BDC’s historian. )

The Forerunners of Jaguar in Australia, New Zealand and South East Asia »
« The Detroiters