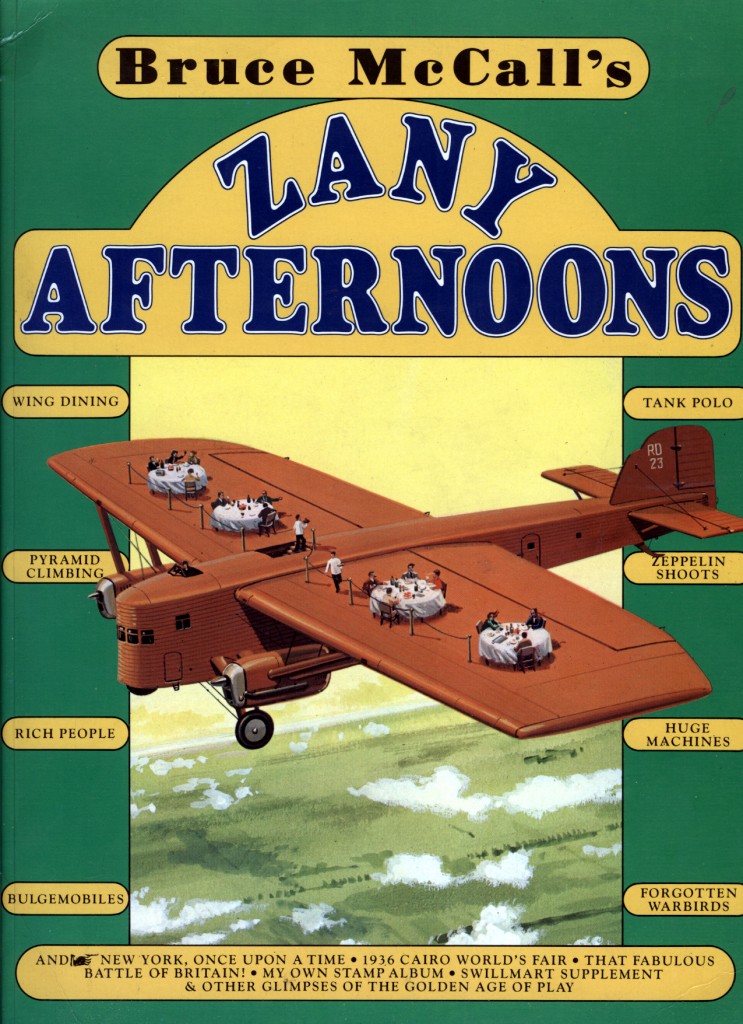 In a former life, Bruce McCall was a principal in McCaffery & McCall, the huge New York advertising agency that served Mercedes-Benz USA. On the side, he wrote less serious stories for Car & Driver (surely you recall the Denbeigh Super Chauvinist!), Playboy, and The National Lampoon. Fortunately, he let his paradoxical imagination run wild in the world of old automobiles and aircraft—all of them notional but easily affiliated with actual makes and models—to the vast benefit of those who enjoy wacky parody, sharp satire, and other such humor.

McCall’s 1982 book, Zany Afternoons, presents a collection of brief articles about an imaginary society from the 1920s to the 1950s, often populated by uber-wealthy and spoiled sophisticates who enjoyed such diversions as autogiro jousts, wing dining, zeppelin shoots (“they fell so much more gracefully than grouse”), and tank polo. You’ll learn about such delightful spoof devices as the RMS Tyrannic and the 1934 Airdreme Nabob V-16 Sleekster. The “Somewhere East of Laramie” automotive ad parodies are as accurate as they are funny, matched by the 1958 Bulgemobile sales brochure (think bejeweled Buicks on heavy doses of steroids). Text appears in the form of fanciful captions describing the action in McCall’s amazingly-detailed, large-format paintings, which perfectly capture the ambience of both subject and period.

One chapter, “Major Howdy Bixby’s Album of Forgotten Warbirds,” delineates such wistful aircraft as the Humbley-Pudge Gallipoli Heavyish Bomber, the Kakaka “Shirley” Amphibious Pedal-Bomber, and a 56-ton, diesel-engined Polish helicopter. The Popular Workbench magazine parody even includes the tiny black-and-white “truss ads” touting the benefits of Collecting Used Zinc and Training as a Streetlight Inspector. This is the kind of book that you just can’t stop chuckling at, and you’ll want to send a copy to every car nut on your holiday gift list. (You will also want to avoid lending it to anyone, for fear it’ll never return.)

The author/illustrator, who indentured in the ad business as an artist penning those heavily distorted illustrations in mid-1950s American car catalogs, before photography took over, has produced other humor books. BesidesMarveltown and All Meat Looks Like South America, the most notable for car folks is The Last Dream-o-Rama, The Cars Detroit Forgot to Build, 1950-1960, his retrospective on the 1955 Cavalcade of Chrome at Matterhorn Motors’ Tomorrowrama. (Think Nixoneer Squelchoramic RN, ordered by the President complete with fridge, washing machine, and dishwasher to commemorate his kitchen debate with Khrushchev.) McCall’s far more serious autobiography, Thin Ice, describes an often-trying childhood in Canada and his lifelong creative fascination with cars and publications. His work, mostly in the form of cover art but also including hilarious short pieces, appears (not often enough) in The New Yorker magazine.