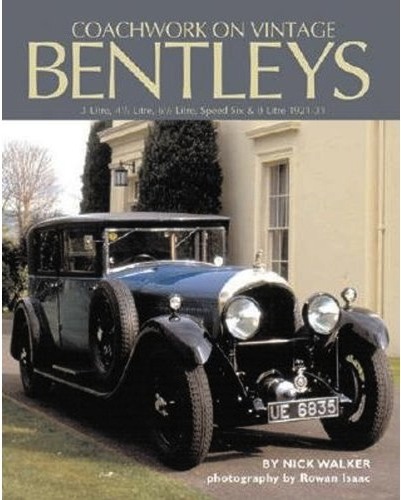 The late Nick Walker is well known as the author of several cornerstone titles in any decent British-car library, most notably A–Z of British Coachbuilders 1919–1960 (his first book and by now an indispensable reference source) as well as Bentley 3½ & 4¼ Litre. The latter is part this publisher’s “In Detail” series for which Nick Walker also covered the Alvis Speed models, various Rolls-Royces, and Aston Martin DB2, DB2/4 and DB3 ranges. The series includes volumes on other makes and models by other authors. All recent Herridge titles now include basic indeces.

This Bentley book covers the 1921–1931 3L, 4L (curiously omitted from the subtitle), 4½L, 6½L, Speed Six, and 8L models. A very useful introduction describes both Bentley and coachbuilding in general and then examines in detail the three main body styles: Saloons and Limousines (by far the longest chapter); Cabriolets, Drophead Coupés and Landaulets; and Tourers and All-weathers.

Each chapter covers the development of the respective body types from the days of the carriage, followed by a good number of photographs, many from collections such as that of Vintage Bentley expert Tim Houlding. They illustrate the points raised in the text very well and are comprehensively captioned, although a small number do raise questions.

The subject of Bentley saloons and limousines rebodied through the years as tourers and Le Mans replicas is taken head on. This subject will always divide enthusiasts into two distinct camps. Walker writes: “Because of the lack of variety in coachwork to be found on vintage Bentleys today, there is a danger that—whisper it not—we might even begin to find them dull! There are only so many Vanden Plas four-door tourers to be seen, lined up in rows at club meetings, before we might just begin to tire of their uniform magnificence.” This, however, is balanced by an explanation of why so many of the heavier, more complicated, saloon and limousine bodies have fallen by the wayside, to be replaced by the replica open bodies seen today.

Some of the b/w photos could have done with a shade more contrast, although the slight greyness gives a period feel. The color reproduction in a few cases is on the dark side, but we must be thankful that so many photographs of original bodies by a large number of coachbuilders are reproduced in the one volume, supported by fine text—a true feast. The 60 color photos are unique to this book. There are a number of period interior shots, but this reviewer feels that a few more of saloon and limousine interiors would have been welcome, if only to transport us back to the comfortable and snug rear compartments which featured differing and delightful interior styles, materials, fittings and companion items (vanities).

Nick Walker writes in a very involving way, almost exciting at times, which encourages the reader on, learning more as the pages are devoured. The book is a celebration of bodies and styles of the past, which is as it should be. For a Bentley owner, Vintage or Derby, the book is a must, and Rolls-Royce owners will find that so many of the coachbuilders, characters, patented methods and styles are just as relevant to that marque as well.

In just the few years since this book was published these very Bentley models have become seriously expensive so solid information, as in this book, is critical.

Austerity Motoring, From Armistice Until the Mid-Fifties »
« The Adventurous Motorcyclist’s Guide to Alaska