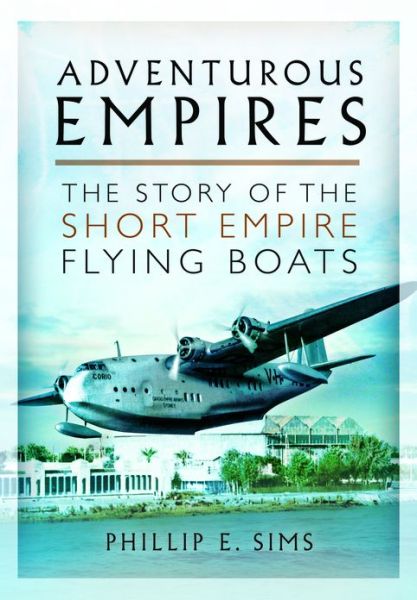 The “short” in the title refers to the airplane’s maker, Short Brothers, but short, too, was this plane’s—or rather boat’s—production run and airline service. “The truth that lies behind the romantic myths of the flying-boats is a wondrous tale of politics, dreams, engineering triumphs and the people who brought it all to life.” And that is exactly the story this book tells.

With an odd sense of the dramatic, Sims, whose first and only book this is, begins the story with a crash. A crash into the water no less, a bad scenario even for a craft that is meant to get wet. Sims is an ex-RAF man and considers his interest in the Empires “obsessive.” Both of these factors lend depth to this book, first published in 2000 (by Airlife) and here reprinted unchanged.

Someone who knew the planes literally inside and out wrote the Foreword and commends the book. This is Hugh Gordon who apprenticed at Shorts, flew on Empires in airline service, and worked on the salvage of the flying boat Corsair that had crashed in the Congo and was repaired—only to crash again on take-off. An epic story in itself.

Sims paints a proper picture by explaining the need for long-distance transport to keep the far-flung British Empire together. Ill-fated airships, competent but limited craft such as Short’s Calcutta and Kent biplanes, and then the sudden brief to develop the Empires. Commissioned by Imperial Airways, it would be one of the few aircraft to go into production without there ever having been a prototype.

Sims also takes the time to lay out the role of and need for organized airlines, scheduled mail and passenger transport service, and travel for business or pleasure in general. Similar activities in other countries are also presented. By the point the story shifts to the Empires, the reader is fully primed to embrace their inevitability—which makes it all the harder, later on, to accept how harshly they lost their utility. There are lots of quotes and excerpts from memos and such to provide background and context. In fact, over 150 people contributed photos, documents, and insights to this book.

Already by page 20 we are deep into the guts of the plane and follow the construction of an airframe. There are quite a few exploded drawings and cutaways but, as always the case with this publisher’s aero book line, the small size of the pages simply does not allow large illustrations. If something as—relatively—small as, say, an engine has callouts that are barely legible, a diagram of an entire fuselage, even printed sideways, can obviously not satisfy.

The story of the aircraft’s ongoing development weaves in and out of layers of macro and micro detail such as the search for new air routes, descriptions of specific flights and ground and air operations, and the activities of the military version of the Empire, the Sunderland.

From recommendations to how passengers should dress on different routes to a virtual stroll up and down the several decks of a flying boat, the reader is as much “there” as the written word allows. It is an engaging, multi-faceted story and very well strung together and delivered.

A point not often made in such books, and not often appreciated by people outside the seaplane community is that some of the very things that made flying boats feasible and attractive—water, water everywhere: you don’t need to build runways etc.—also caused some of the greatest problems. From corrosion to chop, nothing is simple in and on the water, not even at bases specifically created for flying boats. Sims writes, “Such was the appeal of some of the staging posts that captains often overflew them, at the expense of reaching their destinations with lower fuel margins” and goes so far as to say that “facilities at home base Hythe were little better.”

A number of Appendices record such minutia as which aircraft went to what airline and what happened to them there, ditto for aircraft in military service, and a handful of maps. The Index is subdivided in a multitude of ways, which is admirable but takes some getting used to if one isn’t in the habit of looking for subentries such as “Politics” and “Surveys” etc.

A thorough book and, for the price, a lot of book!