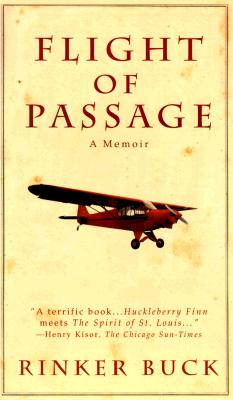 Imagine trying to write a memoir about the defining event of your life thirty years after it happened. This was the challenge facing Rinker Buck in his book Flight of Passage. In 1966, Rinker, then 15 years old, and his older brother Kern, who was 17, flew a 85-hp Piper Cub to become the youngest aviators ever to fly from coast to coast. They bought the Cub for $300 and rebuilt it themselves in their father’s barn in New Jersey.

The simplicity of their aircraft seems astounding today. The tiny two-seat Cub had no battery, no radio, no lights, and needed to be hand-propped to start. Its tubular metal frame was coated with doped Irish linen. The Cub was a link to the low and slow, seat-of-the-pants flying of the barnstorming era.

The boy’s father, Tom Buck, was a flying legend. A barnstormer in the 1930s, he had trained British flyers for the Battle of Britain and had lost a leg after the war in an air crash. This seeming handicap didn’t prevent him from flying stunt shows with a big AT-6 Texan warbird on weekends away from his job as a publisher. Being Tom Buck’s sons meant that the boys were destined to become flamboyant flyers—16-year-old Kern soloed 16 times on his 16th birthday in four separate airplanes. It was Kern’s idea that he and Rinker should fly the cub across the country, and he was the primary pilot on the adventure.

Rinker Buck tells a tale with great drama and the flying scenes are spellbinding. “There’s no accounting for a young pilot as good as Kern was that morning in California. He was my father and Big Eddie Mahler, and all of the instructors and barnstormers back at our home strip, giving back all at once everything they had put into him over the years. Bonk he pulled out of the turn. Wham he crossed the controls, flying us sideways to bleed off speed. Slam he closed the throttle and then kicked in the last of his rudder and aileron to keep us in the sideways slip. All the while he was playing way over on the left side of the cockpit with the stick to hold us flat and nose-high in the slip, so the plane would be expended and have nothing left when we got over the runway.” His ability to describe the technique and craft of stick and rudder flight brings forth the same emotion and awe usually reserved for the flying prose of Antoine de Saint-Exupéry.

Flight of Passage is much more than a flying story. It is a coming of age piece that carefully examines the relationships between two very different brothers and their demanding and heroic father. The Buck brothers were in fact retracing a transcontinental route that Tom Buck had described to them so many times that it had become family legend. But the boys soon find that to survive the perils of their flight they must separate the harsh facts and reality from their father’s romanticized fiction.

Rinker and Kern Buck were successful in their transcontinental adventure and for a brief time were celebrities. Both went on to be successful in their careers and we are fortunate that thirty years later, Rinker Buck decided to tell their story. The cliché is that you find a book so engaging and riveting that you can’t put it down. With Flight of Passage, if you have any interest in flying and adventure, you’ll be staying up late into the night to finish it.