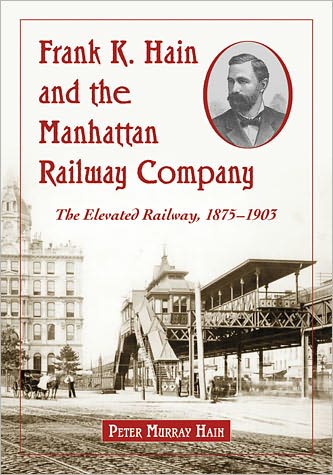 In the 1890s, New York City’s elevated Manhattan Railway was a technical and timing marvel, moving up to one million passengers per day over 102 miles of track using 334 steam locomotives and thousands of employees. Every 45 seconds during rush hour a train pulled in, disgorged its passengers, and pulled away. Over and over, seven days a week, 24 hours a day, the system ran almost faultlessly. From 1880 to 1896 Frank Hain was in charge of the railroad’s operation, and part of this book describes his agonies running the elevated tracks. This stress may well have been what caused him to commit suicide by lying under a freight car and getting cut in half when it rolled over him.

Other parts of the book deal with union conflicts, city politics, transportation evolution within the greater metropolitan area, the technical aspects of steam and electric power, and the way both the public and privately owned railroads were financed and fought over by the upper classes of the day. There is also an excellent breakout of all the rolling stock used by the Manhattan Railway Company, where the engines were made and by whom, and who was responsible for their design. Beautiful period photos show typical stations, elevated street scenes, and the evolution of the passenger car shape as mass transit lessons were learned and design corrections made. Photo placement is well coordinated with the text, making reading and viewing what’s being discussed easy and natural.

The railroad was privately owned from the outset and the “yellow journalism” newspapers of that period expressed unprecedented outrage at how the major stockholders, Messrs. Gould, Sage and Field, were raping the public financially. The daily tabloids also attacked the system’s operation and criticized its service and safety, when, in fact, it was safer and more efficient than surface railroads. Political influence and under-the-table deals were rumored. The heavy hand of accumulated wealth was seen to be suppressing all competition as well as the development of an electrically powered subway system. In the end, of course, subways were built once their development cost could be financed by the public, and all systems, including the Manhattan Railway, merged into a single entity. The bondholders of that entity, composed of basically the same social class as before, now made a 7% return on their investment without having to take any responsibility for running the system.

While all this is interesting and fun to read about, it left me a bit unsatisfied at the end. It was as if the book had a hard time deciding what it was going to be about. It touches on many topics, but never goes deep enough into any of them to satisfy my desire for resolution. Is the book primarily about Frank K. Hain and why he killed himself? Is it mainly about how the Manhattan Railway came into existence? How it operated? Public and private financing? Yellow Journalism? Human and corporate greed? It’s almost as if the text is guarding a secret that is constantly being hinted at, but is never revealed. This ambiguity is ironic because the author’s professional life as a CIA operations and staff officer was all about “buttoning things up.”

The fact that he is related to the protagonist, his great-grandfather’s brother, does not get in the way of giving an unvarnished account. Some chapters are more animated and interesting (2 and 4), while others seem uninspired and the information a bit shop-worn (6). All in all, a good book, but not a great book.

The lack of maps is regrettable, especially for readers not familiar with the lay of the land or even the NYC street system.

Speedway: Auto Racing’s Ghost Tracks »
« The ATL-98 Carvair: A Comprehensive History of the Aircraft and All 21 Airframes