“The chopper’s aura is less threatening today, as its unspecified rebellion lacks the broad social context of that era’s challenges to the status quo. To put it bluntly, it’s hard to imagine someone in a vintage pickup truck feeling inspired to murder a chopper rider today. They’re far more likely to feel a twinge of envy . . .”

These words from the very end of the book are of course a reference to the end of the 1969 movie Easy Rider. And, to put it bluntly, as much as that movie is hailed—by those who unlike the author don’t think for themselves—as a landmark cultural statement, its appropriation of what d’Orléans calls the “talismanic power of the chopper” is profoundly misread (or, more politely: misremembered) as something the movie really isn’t about. D’Orléans, to his great credit, is possessed of a large enough frame of reference to help the reader recalibrate his notion of the cipher that is the motorcycle. 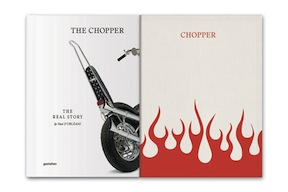 By this point in the review you will have already gathered that this book is not another coffee table glam job with scantily clad women dangling from ape hangers or draped over barely drivable chrome jobs. If you recognize the author’s name it might be from his previous books, The Ride and Café Racers, or an exhibit based on the Chopper book about the development of early American custom motorcycles he curated at the National Motorcycle Museum, the Sturgis exhibits, as an auction consultant, or any number of magazines and websites he has contributed to for three decades. Foremost among the latter must rank The Vintagent that declares, “Motorcycles per se are just metal; it is individuals who animate them, and inhabit the stories within this site. We provide meaning to the metal, and in telling the story of Motorcycling, we tell the story of our world.”

“The story of our world”—big words, much like the book’s subtitle, The Real Story. But neither is an idle boast, never mind that apparently not everyone in that world wanted their story told; the author reports enough resistance—if not outright threats—to his inquiries that he now understands why no one has tackled this subject this way before.

You may not think of it in those terms, but a chopper is “folk art.” As quintessentially American as jazz, and equally in need of a guiding hand to properly process at the cerebral level. There are piles of books brimming with platitudes and stereotypes; if they contain a historical narrative at all, about choppers and motorcycle culture. None are like this one. 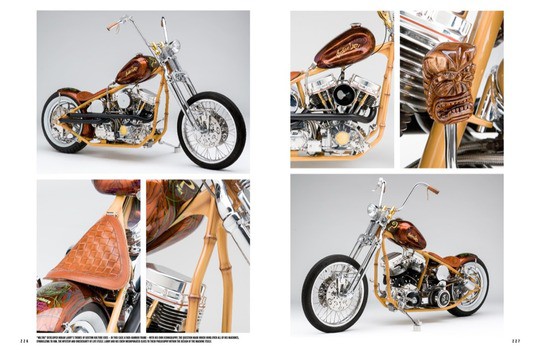 The book focuses on the builders and their influences and the place of the chopper in the cultural landscape. After devoting a few sentences to the mid-1800s steam-powered bikes it jumps ahead to 1905 and a name you may not know even if you use the man’s inventions every time you flip up that side stand or dip the headlights: Oily Karslake. Why pick him out of a sea of hundreds of mostly self-taught DIYers? Because his work evidences for the first time the quality that distinguishes the custom bike: a specific esthetic sensibility. If choppers are known for one thing it is taking esthetics to extremes, even at the price of functionality, but it took a while for the 1920s Specials and Cut-Downs (lowering the top tubes) and then the stripped-down 1930s Class C racers and Bob-Jobs (shortened rear fender and none in the front) to morph into the instantly recognizable superlong-fork machines whose stretched-out and laid-back riding position make them difficult to maneuver but impossible to overlook.

The author’s research included many interviews with principals and there are probably a few names and backstories here, as well as some technical notes, that had not been introduced into the record yet. While, for instance, the Easy Rider bikes are known to any and all, the people who built them are not. Mostly African-American, their role (one of them was even a co-producer on the movie) wasn’t widely known until 2011. And unlike the movie, which cut that morsel from the script, d’Orléans fully integrates the motorcycle experience of black America into his story. The too-peripheral treatment of Japanese builders and styles deserves exploration in its own book.

There are several references to the four-wheel hot rod world but while superficially driven by similar factors (low cost, countercultural leanings) it is remarkable how fundamentally different these two “movements” are. Even chopper-inspired “wheelie bikes” are considered, as are chopper magazines, the show circuit etc.

This is a large, slightly oversize book (9.8 x 13″) but contains only ca. 60,000 words on over 250 pages. Which means one thing: many, many illustrations. Some of the period color photos are surely retouched and some of the older images are, naturally and inevitably, of poor quality. What is not inevitable is the rather poor typesetting. Duplicated words, missing bits, a few stray German words from the original version, typos—not at all what this publisher of very sophisticated art/design books is known for. 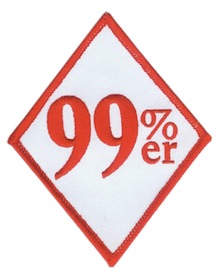 As The Ride before it, the overall design of the book can only be called austere. The photo captions will be called something else . . . all caps, sans serif, boldface, compressed letterspacing. Eyeball overload. On the plus side the book has, as most books by this fine publisher, a properly rounded spine which means it’ll outlive its peers in terms of both form and function. The patch at the right ships with the book, as does a slipcase, when ordered directly from the publisher.