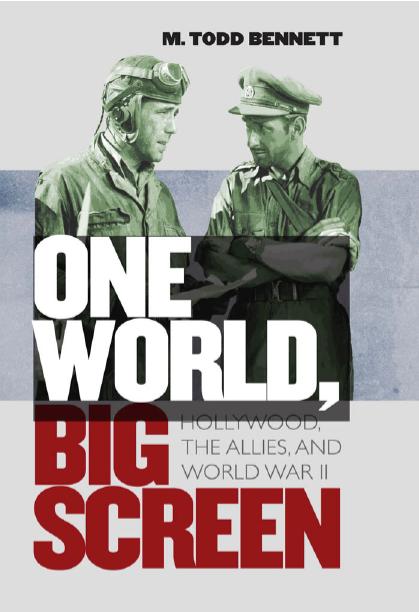 Film is a visceral art. It projects images that flicker before your eyes, images that have the power to create emotions, to set a mood, to entertain. Bond those images to speech and you have another means to enhance the impact of those flickering images. There is a power in film that few forms of art can even begin to match.

In his opening lines of One World, Big Screen, Bennett (assistant professor of history at East Carolina University) asks us to consider a photograph taken of Josef Stalin, Franklin Roosevelt, and Winston Churchill sitting together on the portico of the Soviet embassy, the site of the Tehran Conference in late November 1943. For many of us, it is an easy image to conjure up: the three sitting together, perhaps some bantering between Churchill and Roosevelt, with “Uncle Joe” sitting to the left side of the photograph, looking perhaps slightly bemused by something. The three give every appearance of the setting being extemporaneous, caught in a moment during, perhaps, a break in the talks that were being held. 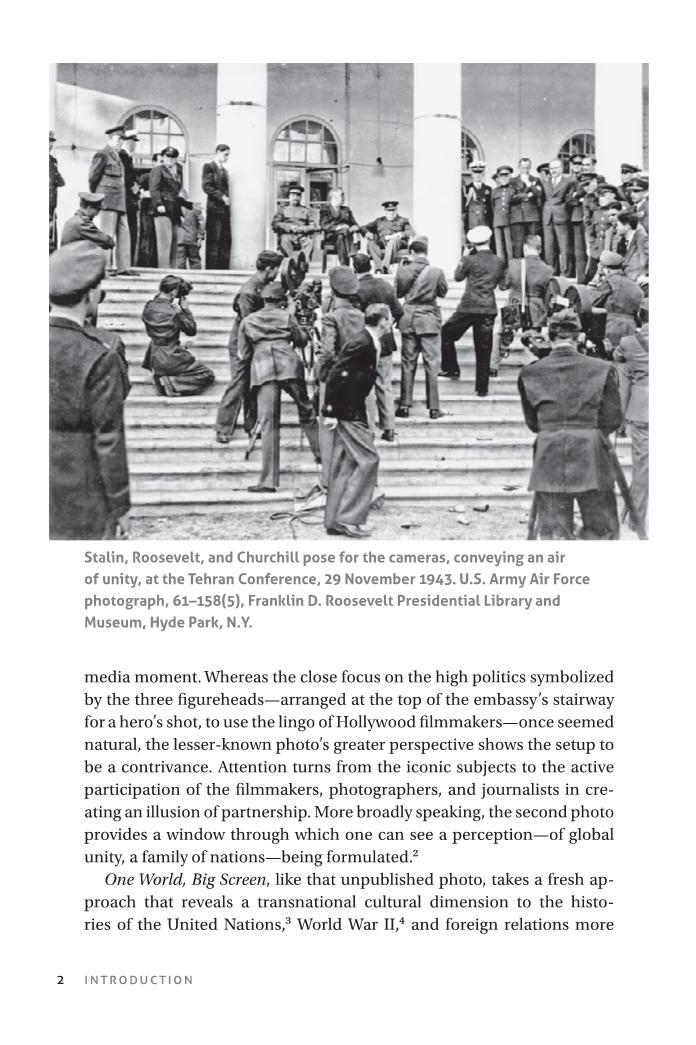 The photograph is a powerful one, showing the leaders of the Allies together plotting the course of the war against the Axis powers. It is this photograph taken during the first of the wartime conferences that signaled the unity of what was increasingly being known as the United Nations. Led by the United States, the United Kingdom, and the Soviet Union—along with China, absent from the photograph—the United Nations was held together by the common bond of a common enemy, Germany, by three of the Allies, as well as Imperial Japan for another set of three of the Allies.

Bennett then provides a different view of the setting, almost as if he were channeling the documentary filmmaker Errol Morris in his book Believing is Seeing: In a long shot, the Big Three are seen sitting in chairs at the top of a set of steps, their aides off to the sides of the photograph and several film crews and still photographers milling on the steps recording the scene on movie film and taking photographs of what is now an apparently skillful, carefully composed montage, a staged photo opportunity.

By asking us to take another look, Bennett leads the reader to not just regard the photographs taken of the leaders of the Grand Alliance at Tehran in 1943, but the films of the era made by Hollywood and their role in the Allied cause. Bennett examines the Hollywood movies made during the period from just before the war, the late 1930s, until its end in 1945, that served to nudge—or in some cases bludgeon—opinion towards the Allied cause. Films made to increase American affection for Britain, support the Soviets in their noble fight against the Nazi menace, and to evoke sympathy for the Chinese in their struggle against the Japanese serve as the basic themes that are explored in One World, Big Screen.

While a number of the films are familiar to the Baby Boomers who grew up in the years following the Second World War, there are more than a few that are rarely seen today, even in the middle of the night on Turner Classic Movies. For every showing of Mrs. Miniver or Casablanca or In Which We Serve, we are usually spared a viewing of something such as Charlie Chan in the Secret Service or another Hollywood production featuring Caucasian actors in yellow-face makeup trying to pass as Chinese: Charlie Chan, for instance, was portrayed by Sidney Toler, who was from Missouri, who in turn succeeded Warner Oland, a Swede. Likewise, there is an irony that Mission to Moscow was a product of Warner Brothers, a studio headed by someone scarcely known for his sympathy for “Uncle Joe” Stalin, before, during, or after the war.

One World, Big Screen is a nice combination of film history and, yes, Second World War history. Bennett gives us not only an excellent book on film as propaganda and its effect on the war effort, but also provides an interesting insight into Hollywood and an often overlooked chapter in its history, what is now considered a part of its Golden Age.

Posted Under: History, Movies, Other Genres | Author: Donald Capps | No comments yet