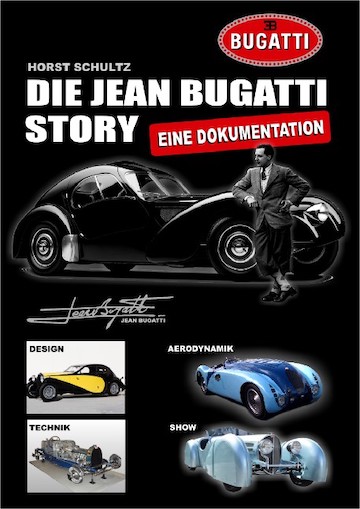 (German) It is of course merely coincidence that Gianoberto Carlo Rembrandt Ettore Bugatti, aka Jean, was born the same year as the Bugatti company was founded but it does make for a convenient celebration of anniversaries, which is why on the occasion of the 110th, Bugatti unveiled at the 2019 Geneva Auto Show a special model in Jean’s honor.

This was the second of six extra-special Bugatti Veyron Grand Sport Vitesse supercars first unveiled at the 2013 Frankfurt Auto Show honoring the men that had shaped the marque’s history. Jean, the eldest son of Ettore Bugatti, certainly belongs in that group, not only as a gifted engineer and designer but as the man whom papa groomed as the heir apparent and gave increasingly larger responsibilities, starting with design. The commemorative car is named “La Voiture Noire,” after Jean’s now legendary design on his Type 57SC Atlantic (the top car on the cover), itself the second (of four) built and said to have been his personal car. 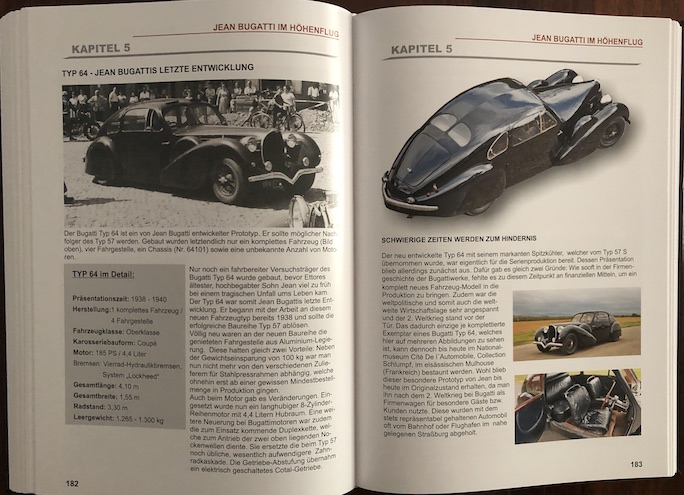 The Type 64, the last model of Jean’s era. Only one was built.

There is no telling what further greatness Jean could have wrought at Bugatti had his life not been cut short so tragically—in another Type 57, the equally legendary Le Mans-winning “tank car” in which he crashed during a road test, only 30 years old. And Type 57s and 59s are what keeps the author of this book awake—he’s got a dozen of them, as one does when one sells his company for millions of dollars and is looking for a hobby.

There’s more to all the snippets mentioned so far, but they set the scene. Author Horst Günther Schultz (b. 194) doesn’t merely own Bugattis (and is hands-on involved in their restoration), he started, in 2002, an entire private museum. A few years later he reorganized it as a foundation, and its educational arm is focused on shining a spotlight on particularly visionary episodes in automotive history (hence the museum’s name, Autovisions)—specifically alternative propulsion and especially Wankel engines. His interest in better acquainting people with “outlier” subjects extends to Jean Bugatti because his accomplishments showed such greatness—that the existing literature does not, Schultz posits, properly reflects. Which is why he wrote his own book. 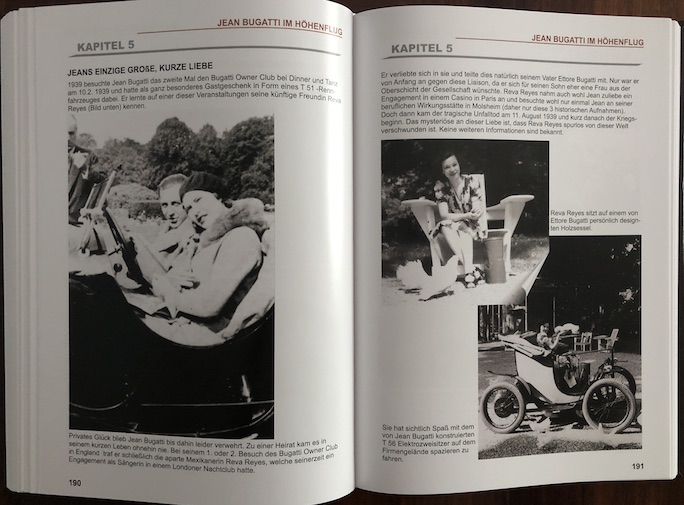 Reva Reyes, the Mexican singer who might have become Mrs. Jean Bugatti. After Jean’s death she vanished without a trace.

Enthusiasm by itself is certainly a strong motivator but Schulz has more arrows in his quiver. He is able to see and to put the Jean Bugatti era, appealing and deserving as it is on its own merits, in the larger context of automotive history. He doesn’t just fondle the delectable coachwork of his cars, he wrenches on them and has commissioned ground-up recreations of important cars that otherwise would be lost to history. He has surrounded himself with Bugatti specialists—and has himself become one. His museum/foundation obviously has a library so he has that aspect covered too. The thing is, there’s not really a lot known about Jean’s personal life. 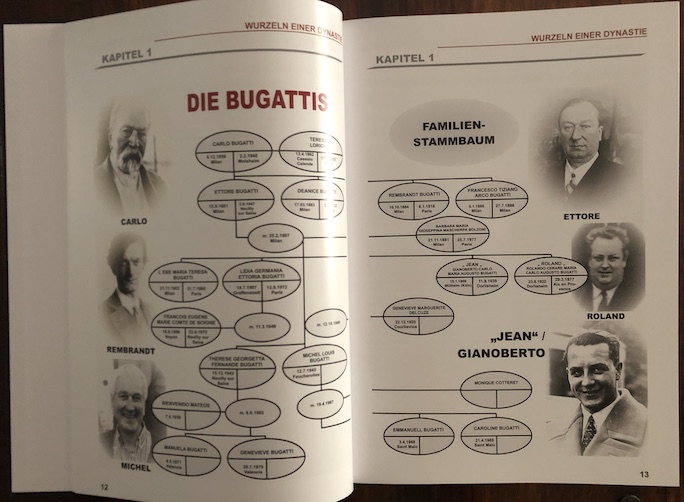 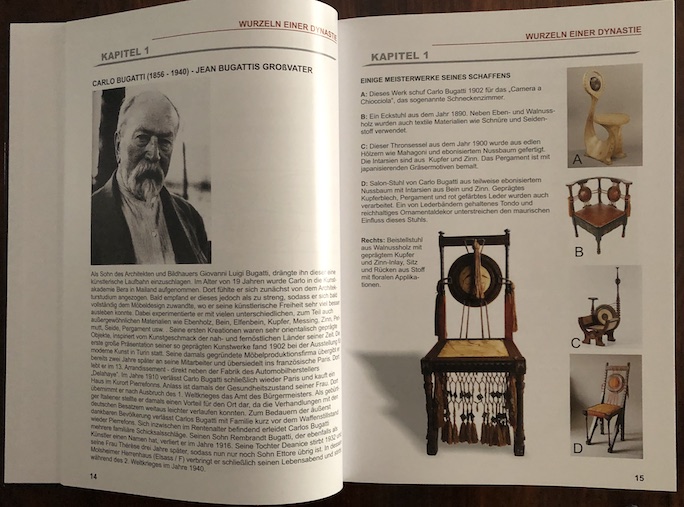 Schultz begins with a quick romp through the family history (several generations of artistically and artisanally inclined people) before zeroing in on Ettore’s engineering work for other makers from 1898 onwards before starting his own company. 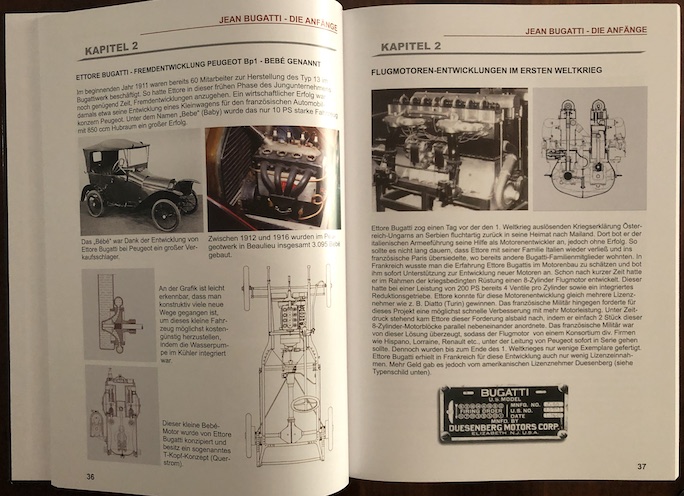 The 1911 “Baby” could have been a great Bugatti, except Ettore created it for Peugeot where it did become a hit.

All the models are described on a few pages each, in chronological order. The level of magnification is sufficient, but it varies. This, however, is neither here nor there as the book’s purpose is not to be an exhaustive marque history but to tell a basically already known story from the perspective of not only what Jean did bring to the table but would have brought to the table had he lived longer. Design and engineering projects and proposals he left behind unfinished obviously influenced Ettore’s subsequent work—although, there are limits to this line of thought because the outbreak of WWII shortly after Jean’s death rearranged the landscape anyway, and radically. Ettore lost the company entirely, in fact it was only restored to him two months before he himself died, aged only 66 so surely a victim of the unbearable burdens placed upon him. And nothing ever came together for Bugatti afterwards, with his youngest son Roland at the helm. All these eras are covered here, as is, briefly, the current VW era and the various attempts by other entities to pick up the reins (cf. Virgil Exner). Schultz’s museum/foundation are covered as well, as are marque clubs, noteworthy Bugatti books and other paraphernalia. 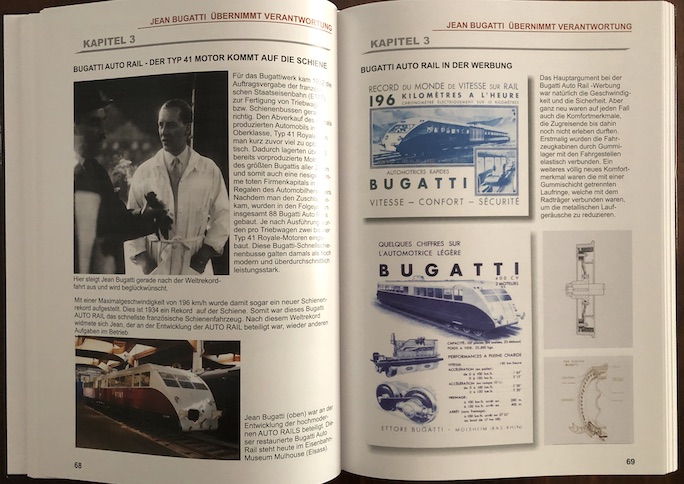 Eighty-eight of these “rail busses” were built, and some used two or even four motors left over from the ill-fated Type 41, the astronomically expensive Bugatti Royale.

Illustrations are plentiful and run the whole gamut from period and modern car photos (also the Bugatti train, aero motors, the T52 children’s car etc.) to promotional brochures, tech drawings, and reproductions of documents, even model cars (also the unique Bugatti dioramas Schultz commissions for the museum). There really is quite a lot on offer here, but it is not so easy to find which is partly due to the organization of the book and partly the lack of an Index, the latter an all too common shortcoming of European books. The price and the fact that it is only available in German won’t help it break into the market but it is a fine book, useful, expands the literature in a meaningful way, and, not least, established that Jean is the hub to which the other spokes on the Bugatti wheel attach. 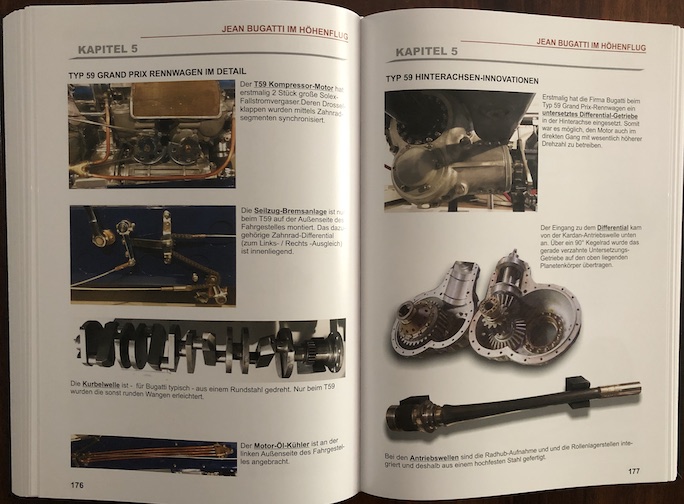 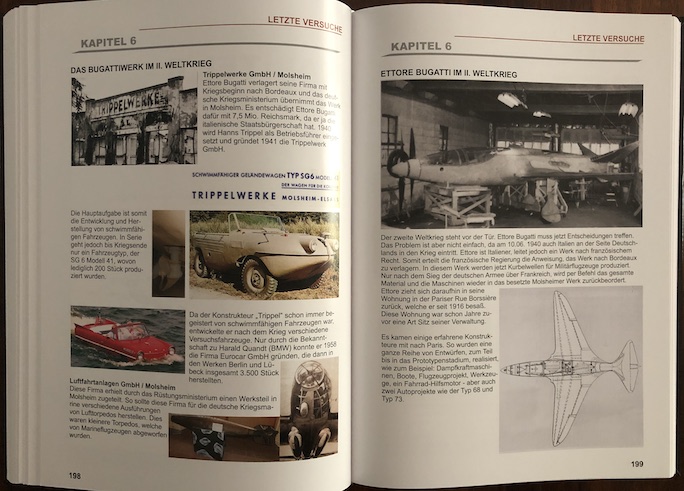