The Renegades Who Built the Cars, Won the Races, and Lived the Legend 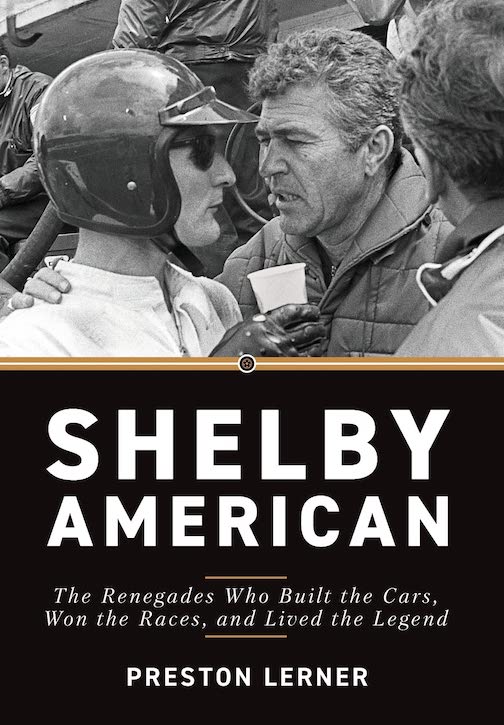 “This book covers it all, from the origin of the Cobra in 1961 to the end of the 1969 Trans-Am season and the introduction of the 1970 GT350 and GT500. It includes not only the well-documented triumphs but also the often-overlooked failures—the star-crossed Indianapolis 500 turbine car, the close-but-no-cigar Toyota 2000GT program, the day-late-and-dollar-short Can-Am efforts, even the sadly forgotten Lone Star. But this isn’t a car book per se. Because cars don’t design themselves. They don’t build themselves. They don’t race themselves. This is the saga of the men and women who brought Shelby American to life, and insofar as is possible, it’s told in their own words.”

Nonono, don’t roll your eyes. Another Shelby American book? Does the world need one? Yes, this one.

The excerpt above sums it up just right; other books do skip over a good number of those things. First, as Lerner notes, “it is a complicated story, and there’s no simple way to tell it.” Second, one big reason why it’s complicated is that from the beginning and for a long, long time Carroll Shelby (d. 2012) controlled the narrative, and he had a halo to polish. And why let facts get in the way of a good story. . . . It’s only in recent years, especially thanks to the late Ed Hugus allowing himself to be interviewed (~2016), that there is a counterpoint.

From the beginning of Shelby making a name for itself, eager motoring scribes found him to be eminently quotable. Bombast, swagger, that Texas drawl, the whole chicken-farmer-turned-Le Mans-winner bit. Ahw shucks. It was a good and quintessential American story. Once he hung the Shelby American shingle over the door, and other people, companies and events intersected his path, the press should have been less gullible. But, as Lerner comments in a related matter, “Different people told different stories—not only different from each other, mind you, but different from the stories they themselves told on different occasions.” Long story short, even today, sixty-odd years later, the writer who asks different questions or talks to people whose voices had not yet been added to the record will be able to paint a different picture.

Lerner’s aim is to fit “long untold and misunderstood stories” into the canon. If this is your first foray into Shelby American, it’s probably best to not read this book alongside any other, older ones because in areas where they overlap there may well be discrepancies. The corralling of information is not an exact science but no matter how you slice it, Lerner’s small-format 326-page book contains an awful lot of detail, embedded, no less, into lovely entertaining prose. Every substantive statement has a callout in the text that links to End Notes stating the source. Those and the extensive Bibliography are commendable both for the books/articles they reference and those they omit—some really had best be forgotten since they can’t be unwritten.

Appended are a 1960–1969 timeline and a list of cars built or campaigned by Shelby American in chronological order, and there is a fine Index. Something the book is not big on is photos: few, on paper that is not really photo friendly, and only b/w but it would be unfair to count this as a “flaw” when it is surely a valid marketing choice to keep the price point low. In fact, it appears as if the first print run is already sold out and a second one is in the works. May it have many more!

The Renegades Who Built the Cars, Won the Races, and Lived the Legend