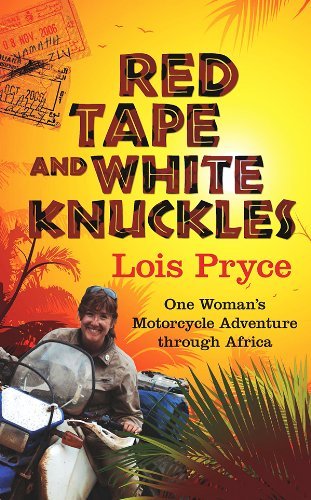 “Back home, as the memory of delirium, vomit and squalor metamorphosed from humiliation and misery into amusing dinner-party yarns, my urge to tackle the Sahara returned stronger than ever (although this probably says more about the kind of dinner parties I get invited to than anything else).”

It all turns out well in the end, obviously, or else there wouldn’t be this book but it starts in a way that makes one question the protagonist’s sense, common or otherwise. How does someone who made a successful solo ride from Alaska to South America embark—a few years later and accompanied by her husband who too is a globetrotting motorcyclist—on a three-week Saharan excursion (prior to the trip covered here) so woefully ignorant of the conditions that she falls critically ill on the first day and has to abort the trip? Doesn’t inspire confidence, does it? Didn’t stop her, though—see quote above.

That quote and really the whole book show that a sense of humor helps, and Pryce has a double dose of it. You won’t know if you should laugh or cry, which says nothing about the merits of the book—in fact it is the very reason it should be read. And savored. It’ll stir something in you. And if it doesn’t, why then you’re not even a good armchair traveler . . . Pryce’s idea of a successful read is of course that upon finishing the book you should drop everything and saddle up to make your own adventure. The logic being that if a 33-year-old, 5 ft 4 female who “could do with losing a couple of pounds” can do it, anyone can. 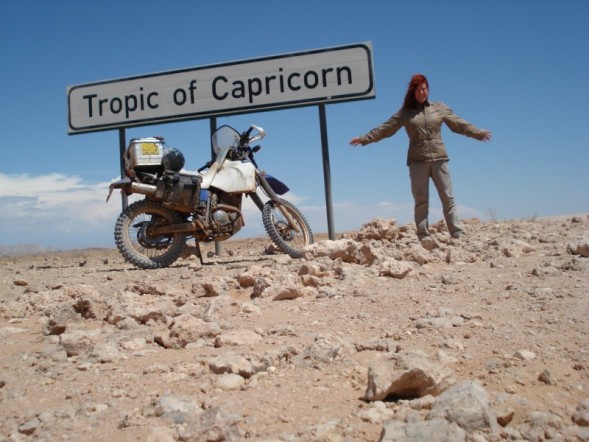 Her choice of bike is not nearly as counterintuitive as at first it seems. A 250 cc trailbike is light enough to be put upright without help and agile enough to cope with unpaved terrain. She did make a few sensible mods to her Yamaha TTR250: 22L tank instead of the stock 9L one, custom seat, small windscreen, exhaust guard, heavy duty inner tubes, custom luggage box (the tiny aluminum box in the photo above) and mounting platform, and a headlight cover. Pryce attributes the fact that she didn’t suffer a single mechanical problem on her 10,000-mile 4-month trip—not even a punctured tire—to proper preparation, appropriate kit, and her “ladylike riding style.”

Readers who do want to do such trips on their own will search the book in vain for lists of tools, spares, or provisions. Many other vital bits are covered only in passing, such as required documents (there’s a reason the book is titled Red Tape), insurance, and various logistics considerations. It in no way lessens the magnitude of her undertaking that it is also only in passing that the reader realizes that she is not exactly entirely solo the whole time but does team up with others as such opportunities arise. 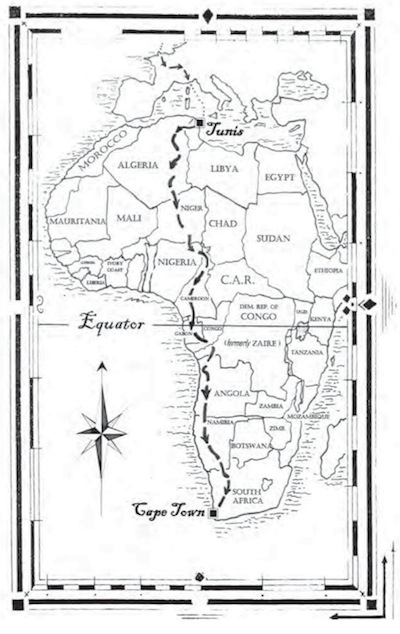 The book is easy to get into and difficult to put down until you’re done. What greater compliment can there be for a book! Lots of dialog drives the story and just looking at the list of countries—Tunisia, Algeria, Niger, Nigeria, Cameroon, Gabon, Congo, Zaire, Angola, Namibia, South Africa—makes obvious that this is an unruly corner of the globe and that there won’t be any shortage of toil and tribulation. The trip took place in 2006 and this book was first published in 2008 in the UK by Century (ISBN 978-1846052439).

The aforementioned Alaska trip was also immortalized in a book, Lois on the Loose (ISBN-13: 978-0099493563 in 2007) and the aforementioned husband is Austin Vince whose name will ring a bell with all who caught the Discovery Television series “Mondo Enduro” (there is also a book/DVD of the same name) that relived a 44,000-mile 400-day motorcycle trip around the world in 1994 by the longest route possible.

Gripping stuff and very, very well written. “Being on a bike throws you out there into the thick of it, whether you want it or not, and makes you more vulnerable as a result. But with that vulnerability comes an intensity, a concentrated high, a sweet, nerve-jangling, heart-thumping sugar-rush sensation of the kind that only comes from real, down’n’dirty, life-affirming motorcycling, and I suspect I will always be seeking out that feeling, somehow, somewhere.”

Posted Under: Motorcycles, Travel | Author: Sabu Advani | No comments yet