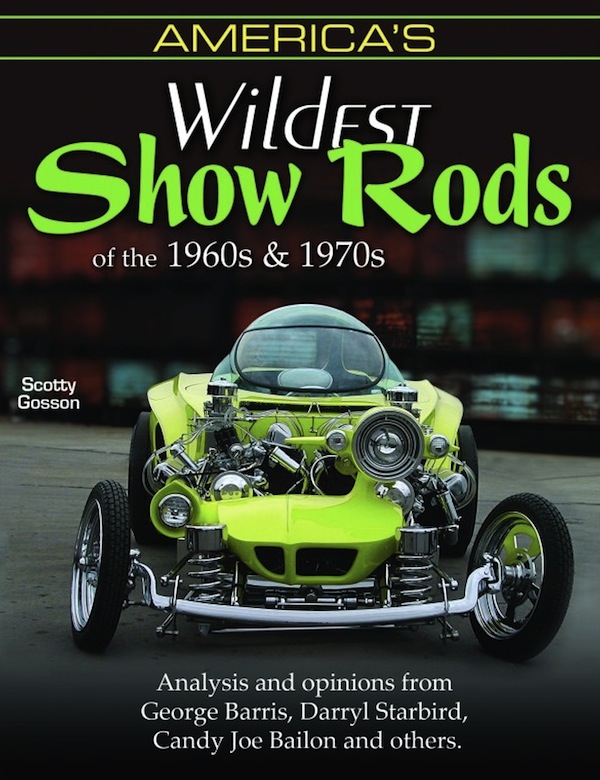 “Who’s to say how the show rods came to the big city? One day, there they were—then they blew town, making off with the answers to the question: How did fender skirts and raccoon tails ever lead to V-8 powered outhouses? There must be a logical explanation. Okay, how about a semi-logical one?

Well, if there were an explanation, even only a “semi-logical one,” it would probably take the fun out of this particular corner of the car world. You’ll have to look no further than the sidebars on pages 14 to 21 which purport to be “actual minutes from the secret round table discussion” to conclude that speculation as to the when and why runs rampant even among the very folks who breathed life into the kool cars this cool book covers.

If you can’t tell your “Vanturian” from a “Vantasta” or the “Futurian” from the “Futurista” then “Cecil the Diesel” and “Trick Truk” are probably a “Mysterion” to you—and you need this book. Actually, anyone with an interest in the car culture—even the mainstream one—will want this book because, as show rod designer Ed Newton points out in one of the three Forewords by movers and shakers, these show circuit confections are “what Detroit could have made, if they had some balls.” Well, the only carmakers that would touch these cars are the toy modelmakers, and for them these flights of fancy were wildly lucrative.

If all you know of the show rod/kustom kar scene are TV cars like the Batmobile or Munster Koach, or iconic blue-chip customs like Mantaray—all of which are included here—the 60-odd other vehicles discussed will open your eyes to a most unusual, and most quintessential American chapter in auto history. “Discussion” is very much the approach this book takes: the car descriptions, on 1 to 2 pages and in some cases 4 or 6, are accompanied by commentary by some of the members on the author’s Board of Royal Advisors. The BOREs are a veritable Who’s Who of the custom scene, the big dog’s who’ve been there and done that. Author Gosson considers himself merely the “moderator.” How this book came about and came together is worth reading and you may want to dip into the Epilogue and Acknowledgments first so as to appreciate that there is a serious aspect to all this frivolity. The illustrations, for instance, are particularly noteworthy because a good number of them have not been seen in decades if ever.

Even among serious car guys, Gosson (“born in the 1950s and already seriously twisted by the 1960s”) has a bio that is a bit on the extreme side. Having learned to read and write via the pages of car magazines, he struck out at age 14 to become a full-time street racer before letting the Army train him as a wheel and track mechanic. Spending the next two decades as a professional musician exposed him to different manifestations of popular culture before returning to the car world as a fabricator of street/strip cars. No wonder he likes “anything by Henry Gregor Felsen.” All these strands combine here, and in his previous two car books, to offer competent and entertaining insights into vehicles all too easily dismissed as fluff without acknowledging their deeper meaning as kinetic sculpture.

Despite its fun tone, this book is eminently useful—not to mention cheap—and ticks pretty much all boxes. Even its design and layout are uncommonly thoughtful and clever. That it really doesn’t answer any of the Big Questions will only matter to folks who’re hung up on the chicken/egg–more taste/less filling debate.

Studebaker Museum [Two books about_] »
« The Big Screen, The Story of the Movies