A Century of Carrier Aviation: The Evolution of Ships and Shipborne Aircraft 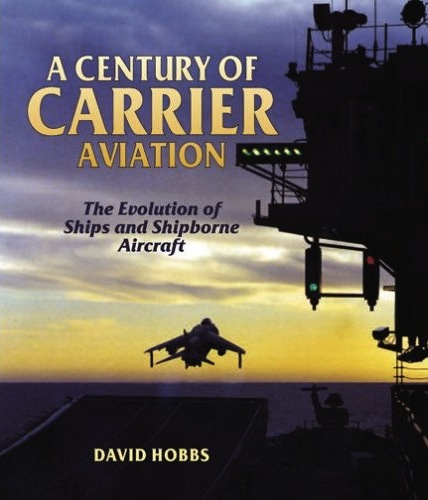 Naval Aviators have a reputation for thinking they’re the cat’s meow. The lay reader can easily enough relate to such obvious difficulties as pilots having to find a tiny and constantly moving runway in pitch-black darkness but have you ever considered how hot funnel gases from the carrier’s engines interacting with cold ambient sea air create turbulence in the path of an approaching plane that is already almost at stall speed while trying to line up with a flight deck that is pitching up and down and side to side? or how the forward speed of the carrier combined with the wind speed affect a plane’s payload and take-off run? Ah, nothing is simple . . .

This large-format book sheds light on these and a hundred other details of the unique challenges posed by environment and hardware.

Considering the severity of these challenges and the shaky beginnings of sea-based aviation, not to speak of the resistance initially put up by the very navies that stood to benefit most from it, it is in fact astonishing that this enterprise ever “took off.” (Ironically, it would later be the Air Forces that would prove resistant to accepting the necessity of adapting land-based planes for naval use.)

An important pointer right up front: this book is predominantly about the boats (all Navy ships regardless of size are called boats) and deals with aircraft mainly in the context of their specific requirements and interactions with boats and not with their operation. And it is predominantly from a British perspective, with references to other navies, especially the US Navy, as applicable. Not only is the author a naval historian and former curator of the British Royal Navy’s Fleet Air Arm Museum, he was also a fixed- and rotary-wing pilot for 33 years (1964–1997) with 2300 hours and 800 carrier landings. He also developed critical carrier operating procedures while at the Ministry of Defense and was the RN liaison on joint projects with the US Navy. Among his eight books on naval aviation (plus another eight he co-authored) is an encyclopedia of British and Commonwealth aircraft carriers and he won the 2005 Aerospace Journalist of the Year award, all of which means that this author is one competent fellow!

The book starts with a Glossary and an explanation of the principles involved in flight from a ship’s deck. Beginning with the impact on the British Admiralty of the Wright brothers’ first flights in Europe in 1908 and Louis Blériot’s Channel crossing in 1909, the book portrays the early efforts of combining air and marine operations, from reconnaissance balloons and airships to patrol, rescue, and attack airplanes whose first flight from a moving British ship took place in May 1912 and resulted in the commissioning of the first seaplane carrier, Hermes, a year later. American, French, and Japanese efforts are also considered here, as are other launch and retrieval methods like catapults and lighters. HMS Furious, Argus andImplaccable and USS Langley are then described in detail in individual chapters. Techniques employed by other navies precede a discussion of straight- vs angled-deck carriers. Given the quick pace of innovation in the early days, almost 2/3 of the book deal with the era of prop-driven planes; separate chapters cover helo (chopper to you Army folks) and Harrier/STOVL operations as well as cancelled and, briefly, future boat programs.

Many of the photos are quite large; all are b/w and very extensively captioned. Many are the author’s own, thus new to the record. Several boats are shown in b/w plan and profile drawings and there are several function diagrams of such items as deck personnel hand signals or the Automatic Carrier Landing System etc. The book ends with Chapter Notes, a fairly extensive Bibliography, and an Index.

As a military pilot would say: Bravo Zulu (good job).

The Roycean: From Manchester to Crewe, via Derby – Vol. 1 »
« Alpine & Renault, The Sports Prototypes