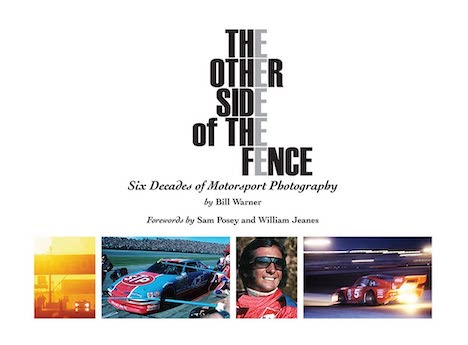 “Shooting at the slow shutter speed smears the rubber traffic cone and adds an element of speed and motion. The trick is to get the car sharp (which this is), and that requires some concentration as the area of sharpness will be where they eye is focused. With today’s auto focus cameras, it’s fairly easy, but 40 years ago with manual focus it was really difficult.”

It’s always iffy to predict who knows what, but let’s just assume that most of our readers have heard the name Bill Warner, not least in the context of The Amelia Island Concours d’Elegance which The Ritz-Carlton, Amelia Island asked him to help start in 1996 and he then so ably shepherded to continued growth until Hagerty bought the event in 2021 (Warner and his team have been retained in a management function). He has also judged at and chaired many other concours, has received buckets of awards for a vast variety of automotive and civic accomplishments, has contributed words and photos to magazines, and written a car book.

But let’s return to the introductory quote: that’s a photographer speaking, and that’s what this book is about and what sets it apart. Moreover, Warner has raced cars competitively so he has a particularly schooled eye not just for what scene or element to shoot but how to talk about it knowingly. Any one, or even two of these factors would not have the cumulative impact of all three, and it is his unique role as concours impresario that has made the many personal connections that mark this book last and deepen.

Audience participation. (l) The caption asks if the reader notices a difference among these three Daytonas, and suggests that one looks “significantly different from the others.” And then it explains what it is.

A good example of Warner reading a photo as a driver. He not only recognizes the piece of paper Fittipaldi is holding up as a tire temperature chart but explains how tire temp relates to camber and toe-in/out settings.

Warner (b. 1943) has been looking through a viewfinder since getting his first camera for Christmas 1958. As anyone who knows equipment of that vintage knows, a photographer had to have a complete grasp of all the variables, and not just in regards to the technical aspects of camera operation, in order to lock in an image because retouching in the modern sense let alone all-out post-shoot composition did not yet exist. Warner was still shooting until recently—and still active in historic racing—hence the reference to “Six Decades” in the subtitle. He has covered a multitude of series from SCCA to F1, and in several countries.

It is noteworthy that Warner credits the late German photographer Horst Baumann as “the one race photographer who influenced my work.” In our review of his one motorsports book we lamented that he is too little known, but if you’ve seen his work you’ll know right away what Warner has in mind when he talks about having an eye for “the essence of racing.”

Surely not all the photos in this book rise to that level but then that is, just as surely, not their primary purpose, their “documentary” aspect is. In that regard it is noteworthy that Warner’s photo captions are uncommonly, uncannily specific and descriptive. He does not explain if this is the result of exemplary note-taking back in the day or research related to writing this book.

Given the amount of identifiable detail in the photos it is all the more regrettable that there is no Index or that the photos are not arranged in any sort of discernible order (year or series, or in the case of the many portraits, alphabetically. The Table of Contents too is entirely too sparse to be of much help. Unexpected choices from a publisher, Collier AutoMedia, the publishing arm of the group that includes the Revs Institute and Miles Collier Collections that embody such a cerebral approach to anything car-related. 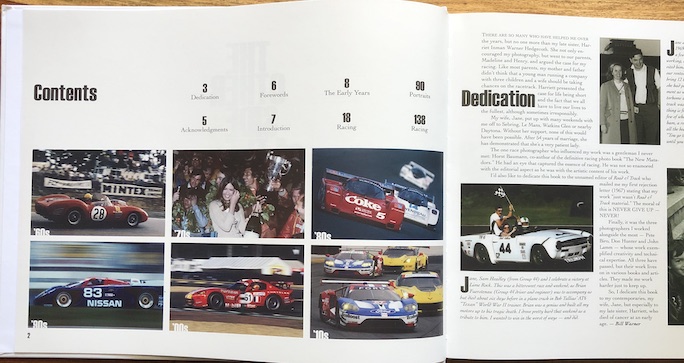 The Table of Contents is basically treated as a design item, with crisp-looking one-line entries. Also unusual, it reads down and then across.

Outside of, say, the thorny world of art criticism there is really no constructive way in which to “compare” one photo to any other. Photos presented in book form do, however, bring a few more discussable factors into play, such as book design/layout, the depth of any accompanying text, the apparatus, and also image reproduction and printing technique. On all these counts the book acquits itself well. How that should translate into retail price is a tricky question. It is a pain, or at least a distraction, to take the review into that minefield, but for those who don’t have $100 bills crumpled up between their sofa cushions this is a valid question—and we cannot answer it without reservations. It is true that much effusive praise has been heaped upon the book; you don’t have to look further than the Forewords (by friends/colleagues Sam Posey and William Jeanes) and the promo blurbs but that has probably more to do with the reverence that is accorded the pillar of the community that Warner really and truly is than any clearly definable bookmaking parameters. That all the proceeds from book sales will be donated (which the book does not even mention) to Spina Bifida of Jacksonville may not make it any easier to part with the dineros.

The introductory quote at top is from 1971; it is followed by these sentences: “This was manually focused and back lit with the sun coming behind the car. There are a lot of nuances to this photo that aren’t particularly obvious to the viewer, such as the lighting, the focus and the speed.” While that quote pertains to a different image it illustrates that Warner is cognizant of the shooting parameters and how to manipulate them for a desired outcome. He was only 17 when he shot the photos on this spread (1960). All are quite dark (note how much detail is obscured in the shot of the no. 20 car top right) but the large one on the bottom left especially. Intentional? To add atmosphere, or to bring out the silhouettes against the sky? Penny for your thoughts, Bill.

A random page from the 40 pages of portraits. They are not in alpha or year order or by series. And again a question: if this is an editorial choice, is it worth the trade-off that no one can find anything?

A word about the title. “The Other Side of the Fence” works both metaphorically and literally. It is attributed to Warner’s late sister who, a photographer herself, first impressed upon him that mastery of the craft would get him closer to racing even if, initially, only on the other side of the fence but then later also persuaded their parents to not stand in his way of trying his hand on the track side of the fence. Tucked away in a photo caption, Warner quips “I’ve gone through life proving I’d rather be lucky than smart. To my chagrin, everybody agrees.” Well, that’s just the sort of self-deprecating thing someone says who is secure enough to know that it ain’t so.

That older sister Harriet was dear and important to Warner. He mentions her several times, the book is dedicated to her, and he reminds himself of her every day. How annoying must it be that the otherwise stellar proofreading has failed in this one important instance: her name is repeatedly spelled inconsistently, in one case within the same paragraph.