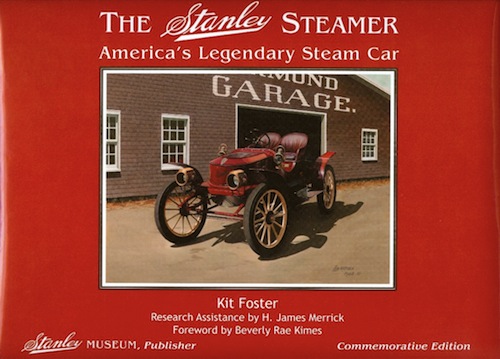 “It’s not at all clear, however, that more development driven by competition would have put the Stanley Steamer in a better market position. Despite the enduring phenomenon of ‘win on Sunday, sell on Monday,’ most automobile customers then, as now, looked for an agreeable tradeoff of convenience vs. price vs. reliability, and the Model T Ford beat the Stanley Steamer on all counts.”

This massive 548-page, 5½-pound layflat hardcover book is a top-quality production. Privately financed by Christopher Hutchins through the Stanley Museum, the book’s dust jacket features a beautiful photo-realistic color painting by Laurids Lauridsen of a 1908 Model K Stanley Steamer semi-racer. This street-legal hot rod set a five-mile track record of 75 mph, which, while it might sound high for the time period, is nothing compared to the 127-mph land speed record set in January of 1906 by what was basically an upside-down canoe running on 3″-wide tires 34″ in diameter. The one-mile burst of speed was achieved by 900 pounds of steam pressure geared directly to the rear axle. A lightweight 206-cubic-inch two-cylinder double-acting steam engine easily accelerated the 1,600-pound car to 130 mph at 700 rpm, with a theoretical top speed of 200 mph. “Hang on and good luck” seemed to be the basic plan for driver Fred Marriott.

If this sounds interesting, then the story of the inventive and artistic identical Stanley twins—F.E. and F.O. as they were known—will be as well. They personally designed the cars and ran the factory that produced them. They sold the company twice for a tidy profit each time (in 1899 and 1917), and never went broke as so many other early auto pioneers did. One brother died in a car crash in 1918 while driving his steamer too fast on a public road, and the other brother made handcrafted violins and owned a luxury hotel in the Rocky Mountains until his death in 1940. Interesting people.

The cars themselves are also interesting. No transmission or clutch. The two-cylinder steam engine was geared directly to the differential. To back up the car, the engine simply reversed rotation. For each engine revolution the rear wheels turned around once or twice depending on the gear ratio of the specific model. You can readily see the massive top speed potential. At 60 mph the engine in the production car was only turning over at 900 rpm. Prodigious torque, and in terms of horsepower comparable to a gasoline engine, perhaps 115 to 390 depending on engine size and steam pressure. All this in a weird frame featuring wooden perch rods connected between the front and rear axles to hold them positioned accurately. This suspension design is very rudimentary, like 19th-century horse drawn carriages. In 1899 the car only weighed 700 pounds, making for brisk acceleration.

The highly respected and award-winning Beverly Rae Kimes wrote the book’s Foreword, while Stanley Museum Archivist H. James Merrick provided research assistance and several Stanley Steamer aficionados added data for various appendices. All in all, this is a comprehensive book well worth owning, describing an automotive dead end that didn’t die easily. While steam power is inherently less efficient than internal combustion, the lack of a transmission and associated drive train kept the mechanical construction simple (only 32 moving parts). This allowed the Stanleys to profitably produce low runs of basically custom-built vehicles in a very small Massachusetts factory, and still remain price competitive with large mass production companies in Michigan which produced the similarly-priced Buick. By 1927 the company was gone forever. All told, perhaps 10–11,000 cars were hand-built during the 28-year lifespan of the company.

I personally would have liked to have seen more photos and blueprints of the mechanical specifics of the whole car. Perhaps a reproduced owner’s manual would help give a better feel for what driving a steam car was all about. The Stanleys’ highly unique design matches Ettore Bugatti’s stubborn dedication to doing things differently. More detail on the management structure and other production issues of the Stanley brothers’ manufacturing operation would also be enlightening to read about. Some of that information is already in this book, but it is inferred that more is archived at the Stanley Museum. As was stated upfront in the Acknowledgements, they envisioned this book leading “20 years down the road” to a “second book even more definitive.” Here’s hoping. (It would be around 2024.) It’s rare that so much primary information has survived about any of the early auto companies, let alone one as unique as the Stanley brothers’ enterprise.

The author, Kit Foster, holds engineering degrees and is a member and past president of the Society of Automotive Historians, a member of the Antique Automobile Club of America, the American Historical Association, the International Motor Press Association, and the Guild of Motoring Writers in the United Kingdom. He obviously has confidence about his writing, which results in a smooth and easy style that takes the reader effortlessly through the text. All in all, a book well worth buying if you have the slightest interest in steam cars, or in automotive history in general.

The book opens with a Dedication, Foreword, Preface, Introduction and Acknowledgements, followed by 19 Chapters, a Bibliography, Glossary, Appendices A through I covering production figures, specifications, patent information and an interesting nine-page reminiscence from Harold Young about delivering Stanley cars to various people including the DuPonts (the Stanleys did not use a traditional dealership network—much like Tesla Motors today as far as sales, delivery, and maintenance issues are concerned). A Stanley Family Genealogy and List of Illustrations lead up to a thorough Index, ending the book.

Badges & Uniforms of the Royal Air Force »
« Under Their Thumb