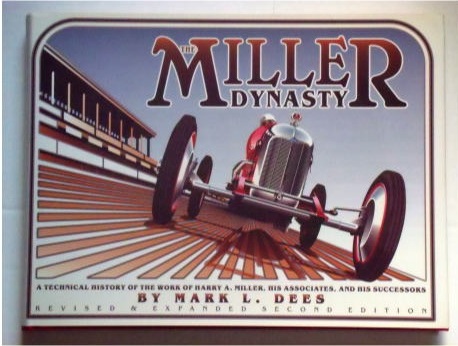 Students of racing history are lucky today, with shelves of books and additional knowledge just a mouse click away. The scene was far different in the years following World War Two, with very little written and most of that concentrating on the European scene. Almost alone, researcher Griffith Borgeson began to document the story of the beautifully crafted cars and engines that would dominate American racing for over a half century. His work, published as The Golden Age of the American Racing Car in 1966, turned the history community’s attention to the one central figure responsible for those magnificent machines. That man was Harry A Miller.

Inspired by Borgeson’s work, fellow Californian Mark Dees began to seriously accumulate Miller lore, interviewing those still living who had known or worked with Miller, along with survivors from the prewar racing world. He was able to acquire a half interest in the drawings and patterns that had been preserved by Bugatti restorer O A “Bunny” Phillips, and gradually assembled a pictorial record of the entire Miller output, along with that of Miller-inspired successors Offenhauser, Sampson, Sparks, Winfield, and Novi. This extensive research resulted in The Miller Dynasty (Barnes Publishing, 1981), the first edition of which earned a Cugnot Award honorable mention from the Society of Automotive Historians. That book quickly sold out and prices for copies in the used market escalated. Meanwhile, the author continued his quest for knowledge, and this heavily revised and expanded edition, adding 48 additional pages of text and 42 more photos arrived in 1994. When Dees was killed in a road accident in 1996, the racing history community lost one of its major contributors, but his legacy lives in the pages of The Miller Dynasty.

Beginning with a successful carburetor that became popular with the racing crowd, by 1917 Miller had built his first racing car, the famous Golden Submarine raced by Barney Oldfield. Miller was not a trained engineer, nor was he a good businessman, but he had Leo Goossen to translate his visions onto vellum, and Fred Offenhauser to produce them in metal. Together they produced the fastest and most beautiful racing cars of their times, along with designs for marine and aviation applications and a pair of cost-no-object road cars for wealthy patrons. While every Miller project is covered, the main focus is on the jewel-like twin cam straight-eights that ruled the board track era in chassis that also pioneered front- and four-wheel drive. The development of the four cylinder engine that, as the Offenhauser, would become near universal at Indianapolis after the War is fully described, as are the less successful Miller-Ford and Gulf-Miller racers. As late as 1980, Drake Offys still made the starting field at Indianapolis, but that was the finale for engines with a direct line back to Harry’s 1920 design. The hundreds of photographs and drawings throughout this heavyweight volume graphically illustrate the artistic side of Miller, the man, whose emphasis on finish and harmony of proportion likely contributed to his economic failure.

While more recent works by Borgeson and Gordon White have added to what we know of the Miller/Offenhauser story and Harry Miller himself, Dees’ work remains the gold standard and is essential for any racing library. Current prices vary by dealer and condition, but an on-line search will find copies of the revised second edition available at reasonable prices. The first edition is a desirable item in itself, but collectors should know that in 1984 the author issued a 16-page booklet of errata and supplemental notes for $4.95. The supplemental booklet corrects many errors and adds to the value of any first edition offered for sale.

The Miller Dynasty: A Technical History of the Work of Harry A Miller, His Associates, and His Successors
Revised and expanded second edition
by Mark L Dees
The Hippodrome Publishing Company, 1994
576 pages, 667 b/w illustrations, hardcover
List Price: $150
ISBN: 0-9638084-0-0

British Woodies From the 1920s to the 1950s »
« Two Wheels Through Terror: Diary of a South American Motorcycle Odyssey