The Roycean: From Manchester to Crewe, via Derby – Vol. 1 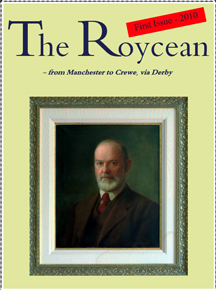 The Roycean is a new annual journal containing scholarly articles on the history of Rolls-Royce and (Derby- and Crewe-built) Bentley motorcars up to the 1960s, as well as articles on coachbuilders, dealers, the personalities involved with the cars, individual models of the cars made, and interesting owners. (The city names in the subtitle refer to the places at which these cars were built at various times.) The list of contributors to this inaugural issue is impressive, including marque specialists Tom Clarke, John Fasal, Will Morrison and Steve Stuckey, in addition to specialist researchers Richard Forder (who has published on coachbuilders S&P Forder and Bradburn & Wedge) and James Fack (who has published on the Hudson Terraplane, coachbuilder Atcherley, and prewar Talbot cars).

The primary purpose behind this journal was to make available specifically to a UK and European readership some of the highly focused material that had been published in specialist magazines and journals elsewhere, i.e. in the USA and Australia.

Since such journals are usually available only by subscription they are thus self-limited and not in general circulation. Over time, if met with success, the scope of The Roycean may well change to feature original material not published previously elsewhere. The journal aims to provide a wide range of material along the lines of The Rolls-Royce Owner magazine issued only eight times during 1963–64 by Jeremy Bacon. This magazine, now much sought after, introduced new enthusiasts to car discoveries, historical material not seen before, and created a new appreciation of the company’s achievements (Rolls-Royce absorbed Bentley in 1931; the marques were split again in 2001 when then owner Vickers sold the company at auction, with Bentley going to Volkswagen and Rolls-Royce to BMW). The Royceanstrives to emulate Jeremy Bacon’s valuable contribution all those years ago.

The first edition contains an in-depth study of the life of Charles Rolls by Tom Clarke, timed for this centenary year of his death on July 12, 1910. “Charles Rolls: one hundred years on” contains a wealth of new material that has emerged about Rolls in the last few years, and in particular new knowledge of Rolls’ flying experiments of a much earlier date than previously realized. This particular article, incidentally, is merely a taste of a new book the author is currently working on that will materially revise and expand what we thought we knew of Charles Rolls.

There is also an updated article by the Australian Rolls-Royce Phantom III expert Steve Stuckey, “Weighty matters, or how to make a Continental Phantom III”. This article investigates the extensive work aimed at reducing the weight of the Phantom III, both directly by Rolls-Royce on the chassis and by encouraging coachbuilders to reduce the body weight.

Will Morrison, a UK researcher specializing in coachbuilder histories has contributed “Frederick Henry Royce and the Roberts boys”, revealing the story of the previously little known firm of Roberts of Manchester, which supplied the body for Henry Royce’s first ever car, chassis number 15196. When the Roberts brothers separated, one of them moved north to nearby Preston, and the histories of both the Manchester and Preston firms are related here.

“Full circle: a Silver Ghost and its Sheffield connections” by Richard Forder traces the little known Sheffield coachbuilding firm of Pickford, Trown & Co. “The best client of Rolls-Royce: the Maharaja of Patiala” by John Fasal is a foretaste of his forthcoming epic work Rolls-Royce and Bentleys in Princely India illustrated with several photographs from the author’s collection. “The Rolls-Royce racer: Eddie Hall and the Ards T.T.” by James Fack tells the story of the 1934 Tourist Trophy and gives the reader all the excitement of being there.

Other features include a design for a V-front saloon on the 40/50 hp chassis by J.&C. Cooper from Cooper’s Vehicle Journal of 1920, “The Phantom II Continental” is a reproduction of a four-page period Rolls-Royce brochure, and “Postwar recovery” showcases a series of 28 photographs of post-WW II coachwork from Tom Clarke with notes and captions by Will Morrison.

Comprising seven major articles and over 104 pages, illustrated with many high quality black and white photographs, and color outer and inner covers, this is an essential acquisition for the serious historical enthusiast.