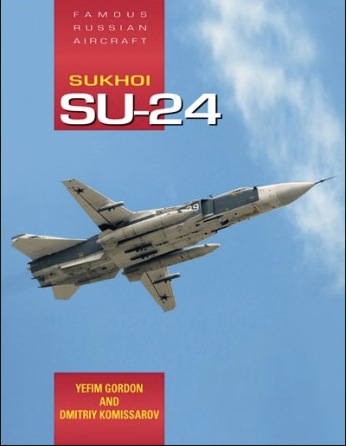 “‘So there I was, flying the machine. Moving the stick all the way to one side, I waited as long as I was told to. All of a sudden the aircraft changed the direction of its roll on its own and started yawing sharply left and tight. A series of deafening bangs resounded through the aircraft as one of the engines surged.’”

This quote hints at one of the features the Su-24 is famous for introducing on Soviet aircraft, the swing-wing, or, properly, three-position variable-geometry wing. It also illustrates a feature of this series of books that manage to leaven exhaustive detail with the liberal use of quotes and an approachable writing/editing style.

Pick any three current conflicts from the news and chances are someone is operating this now 45-year-old aircraft in anger. In fact, that Russian jet the Turks shot down in November 2015 was an Su-24.

Sukhoi’s 2016 product catalog describes the purpose of the aircraft NATO knows as Fencer with no-nonsense specificity: “The upgraded front-line bomber Su-24MK is designed for bombardment with bombs and missiles in favourable and adverse weather conditions, in daytime and at night, including at low altitudes with pinpoint destruction of ground and naval surface targets.”

If it can do all that, it is no wonder the Fencer had a long production run (first flight 1967), a multitude of operators and several variants, and is receiving continuous upgrades. There’s a lot to tell, and of the several books that have tackled the subject before (including Gordon himself, in 2005/2010), this new one is easily the most thorough, which is no wonder if you consider who wrote and who publishes it. Author Gordon is pretty much still the gold standard for books available in the West about Russian aircraft, and whoever joins him on any one project is likewise a reliable guide.

If you’ve followed Gordon’s output for a number of years you’d take one look at the cover design and recognize the book as one by Midland Publishing, an imprint of Ian Allan—except this one says Crécy  Publishing on the spine because they acquired Midland (as well as the Classic list) in 2014. For all practical purposes, from physical format to paper type to methodology the new book looks and works exactly as its esteemed predecessors. Specifically this means that both the aviation historian and the scale modeler will find almost overwhelming detail here.

Everything positive we’ve said in previous reviews of Gordon et al’s contributions to the “Famous Russian Aircraft” series applies here, with one improvement: there is an Index! It too is sort of overwhelming, not only because it is subdivided into categories such as aircraft, bombs, locations etc. but because its very specificity requires a fairly advanced knowledge of minutia. Also, there is no general index so you’ll never find those references to the aptly named “guillotine” ejection system (a telescoping titanium firewall) or the “Stork” TV imaging system again unless you take notes as you read.

From the Su-24’s difficult development to different camo schemes used by the Iranian Air Force, everything is here. Over 750 illustrations from a vast number of sources augment the text, along with tables of all sorts of stats and specs. Dozens of color profiles show paint schemes and markings and there are many illustrations of unit patches, nose art, etc. Appended is a list of production figures, a summary of accidents, and several pages of b/w side and 3-views.

Comparing chapter 1 “Antecedents And Precursors” to the existing literature shows one thing: Gordon is not going to be out of work anytime soon.