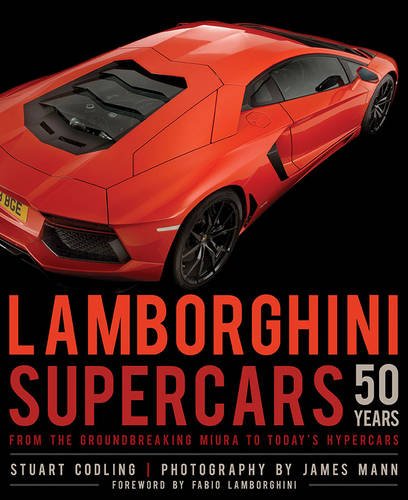 “Some of the more hagiographic accounts of the company’s history dwell on Ferruccio’s man-of-the-people credentials, and while he was indeed more hands-on than his successors it is unlikely that he spent quite as much time on the factory floor as some authors suggest. The schism between management and workers began as a consequence of the faltering economy before Ferruccio’s retirement, and if it widened afterward it was not so much a factor of the new owners’ management style as the fact that they were foreigners.”

This excerpt seems simple and obvious enough but embedded in the polished prose are some keywords that hint at something that distinguishes the entire book: a nuanced approach not shying away from independent thought—a rare quality!

In other words, this is a serious look and not just a glorified PR exercise to milk the firm’s 50th anniversary in 2014. While Codling, right in the Introduction, recognizes that “myth is a vital element of brand mystique” and a key parameter for owners putting up with “wildly impractical and often temperamental beasts,” it doesn’t even take him a dozen pages to shine a spotlight on three myths that will even make well-read Lambo enthusiasts sit up straight. The first one is the most irrelevant to the historian but the one the company itself has fully internalized as part of its “origin story,” the alleged argument between Lamborghini and Enzo Ferrari over service issues that resulted in Lamborghini deciding to build himself a better car and ultimately an entire car-making business. But the other issues have far more wide-ranging consequences: was the engine in the first Lambo a . . . gasp . . . Honda? how much of Giugiaro’s design is in the epochal Miura? And speaking of Miura, that’s not the car that everybody says had bricks in its engine compartment at the motor show launch. That almost none of these items are new revelations makes it all the worse that they are still being parroted by writers less competent than Codling!

This book, then, is a solid treatment of the subject and will be meaningful at all levels. Add to that veteran photographer James Mann’s imagery, the oversize format of 9.75 x 12″, premium paper, and a laughably low price and you have no reason to pass. But do realize that not even Lamborghini makes only supercars—no matter that this is a rather fluid distinction and good for endless arguments—meaning this book covers the Miura, naturally, but not its 4-door prototype nor the production model it spawned, the Espada. Other models covered are Countach,  Diablo,  Murciélago,  Gallardo,  Reventón,  Aventador,  Sesto Elemente, and  Huracán. This is evident even in the Index that lumps any and all Lamborghinis mentioned in the book under “L” by model name and then further breaks out the featured models under their respective model names.

The text is fluid and clever, utilizing many quotes from various folks and many excerpts from magazine road tests and the like. It is unusual, but welcome, that an author is not afraid to talk money and we find here frequent reference to auction prices. A number of sidebars are sprinkled throughout, mostly containing bios or peripheral bits such as the short-lived F1 effort. Panels with basic specs accompany each car.

It is evident that the book is designed with intent and purpose and is visually strong, appealing, and convincing. What is not in every case ideal is the relationship between text and photo—but anyone doing layouts will grant that many factors conspire against this! One example: the very first prototype is not shown until seven pages after the text introduced it (p. 12), and even then only as a cropped view of the front bumper and hood. At least this photo has a caption, which most do not, so you can retrace your steps.

While Fabio Lamborghini, Ferruccio’s nephew and director of the museum, allows in his Foreword that the newer cars have less “artisanal content” (which, really, is an improvement . . .) all Lambos are highly personal expressions both of the people who design them and those who buy them. If you are new to the cars, realize that photos cannot do the cacophony of shapes justice mainly because no matter where you stand to take a photo, there are always elements that would be crucial to the overall dynamic of a car that can’t all be seen from one vantage point. Also, unless you are in the habit of walking on stilts, you’ll always be missing one of the most arresting views of a Lamborghini—from above. Thankfully, Mann provides several of these. Not all the photos here are his; some, especially period photos (as well as the few tech drawings) are from company archives.