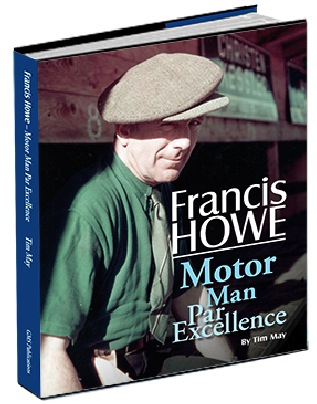 “Though a few members of the aristocracy did become strong advocates of the ‘automobile’ they were very much a minority. Far more common was indifference or outright hostility—the car often being seen as a disruptive force in society. Francis however embraced the car from his youth and it remained an abiding passion for the rest of his life.”

Francis (1884–1964), Viscount Curzon, did indeed have an interest in cars since his early days but he was already 44 years old when he took up racing in 1928. Given his age and relative inexperience, it is all the more remarkable that he would quickly rise to become such a prominent figure in British motorsports, winning, for instance the 1931 Le Mans 24 Hours (with Tim Birkin, in an Alfa).

You may not give a hoot about prewar motor racing so consider that every time you use the modern motorway system in the UK, Francis Howe had something to do with it. And even Americans, who sometimes need a nudge to apply their minds to things that seem outside their immediate experience, should realize that the Earl Howe Trophy awarded each year at the Indy 500 for the highest-placed British driver is named for this Earl Howe.

This is in every regard an exemplary book, done with utmost attention to planning, research, and execution—a feat all the more remarkable considering that Tim May died (2011) before being able to put the finishing touches to a book he had been working on for over a decade after retiring from a professional life in academia. The task of finalizing May’s manuscript (especially the appended material) and selecting and then captioning illustrations fell to, primarily, motor racing historian Adam Ferrington and ERA club secretary Guy Spollon, two of May’s colleagues from the ERA world in which he was an eminent historian (which, incidentally, earned him that club’s Francis Howe Trophy). UK readers may well recognize the name May as that of competitive driver and competent author Claude Austen Newton May (1910), Tim’s father who formally retired in 1956 and usually wrote under the pen name Wheelspin. 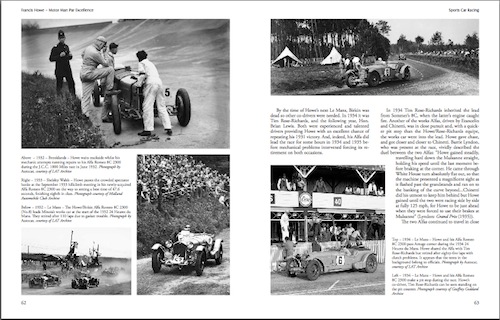 To convey the fullness of Howe’s many-faceted life and the context of the family traditions, May turns the clock back to the mid-17th century when the Curzon and Howe families “merged.” As landowners they played an active role in politics, a key aspect of Francis’ life at all times, both in regards to national politics and, more so, motor racing governance such as the British Racing Drivers Club whose second president he was from 1929 until his death in 1964. Note the first year, 1929, only a year after he took up racing—it is extraordinarily unusual for an active driver to be involved on the admin side at the same time and at this level. Another branch of the “family business” would have had to be the military, in this case the Army and the Navy to which Curzon-Howes contributed a number of generals and admirals (here too is a US connection, in the form of Sir William Howe at Bunker Hill and elsewhere). May develops all this background at an unhurried pace and readers unfamiliar with the inner workings of the British aristocracy may find the economic, political, social, and “psychological” dynamics especially interesting.

Francis’ activities in those two arenas are considered in one chapter each before the narrative hones in on the racing. Note that only those car-centric last four chapters—Sports Car, Grand Prix and Voiturette racing, and BRDC, RAC etc.—are referenced in the Index. One Appendix presents a comprehensive table of Howe’s racing appearances, another a summary of Howe’s road and racing cars (also see Comment section). Many of the latter he owned privately, as opposed to works cars. Also described are three armbands Howe wore as steward.

From family portraits to racing machinery at rest and at work, every aspect of the story is splendidly illustrated and many of the photo are said to have never before been published. Having seen hundreds and thousands of such we cannot disagree and go further by saying that many of these photos have a candid, story-telling quality not often seen. They are also very well reproduced and generously sized.

This is the first proper book-length biography of Francis Howe and it does its job so well that there really is no foreseeable need for another one.

Profits from the sale of the book will go to the Motor Neurone Disease Association to fight the disease to which May succumbed.