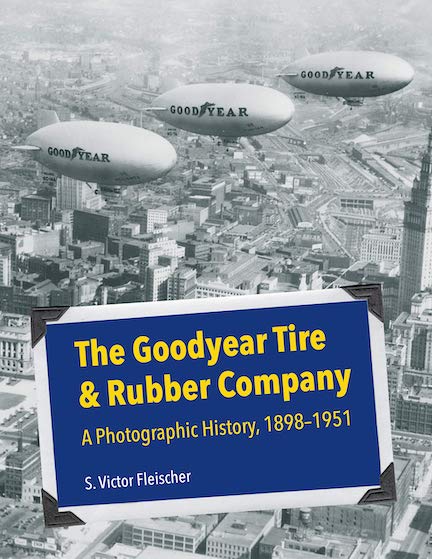 A new book about Goodyear Tire & Rubber Company recently joined two others already in my library. What amazes is that there is virtually no overlap or repetition between the three books which can be attributed to the diversity of Goodyear’s businesses and the products it has developed and marketed since its 1898 founding. Equally amazing is that the company’s management saw fit over the decades to maintain and grow its historical records—documentary and photographic alike.

Essentially a picture book with descriptive text, The Goodyear Tire & Rubber Company, A Photographic History, 1898–1951 is divided into sections organized to present the panoply of items Goodyear has developed and produced over the decades. The first two sections present all manner of tires with many of them road-going and an equal number that are for vehicles and other equipment that are not on the roads, but rather work fields, mines and at construction sites. Next come balloons and airships, a section for each. Again each in great variety intended for a myriad of uses. Balloons range from fun (think Macy’s Thanksgiving parade) to high-altitude weather to super-high-altitude, literally stratospheric, conducting research.

Another section is devoted to “Goods for Home, Office, and Industry”. Here you’ll find belts that transfer power or transport goods, hoses developed to water your garden or fill your automobile’s tank, or to send high-pressure, super-heated steam from the generating source to its work site. During the decade of the 1940s, Goodyear even developed and constructed entire housing units—in excess of 2,000 of them that, yes, were occupied.

The last chapter is more somber. It’s titled “The Arsenal of Democracy” and details Goodyear’s contributions to armed conflicts. It wasn’t just the automobile manufacturers who converted plants to the war effort. Goodyear developed and produced a product to give sailors safe footing aboard ship, on deck and below, constructed gas masks by the thousands for foot soldiers, and even built entire aircraft—decoys and real ones, specifically over 4,000 FG-1 Corsairs.

Author S. Victor Fleischer has created wonderfully interesting text explaining the images and introducing each section. That’s a tribute to the skills he’s developed since first earning multiple degrees in history, followed by work as a professional archivist. He’s even been nominated for an Emmy as co-writer -producer of a documentary titled Lost Voices of the Great War.

The Goodyear Tire & Rubber Company, A Photographic History, 1898–1951 was published by the University of Akron Press by selecting just shy of 200 images from the over 23,000 that U of A, funded by a grant from the National Endowment for the Humanities, so far has digitized out of the nearly one million that have been turned over to it by Goodyear as part of some 3,000 cubic feet of materials entrusted to the university for preservation and research.

There are many hours of looking, enjoying, remembering, and learning for everyone—young, old and in between—within this fascinating book’s covers. However, the two earlier books should not be overlooked for, as mentioned, with no overlapping of images or information, they truly complement one another.

Both of the earlier books were published before SpeedReaders existed. Thus it is appropriate to include some words about each here. 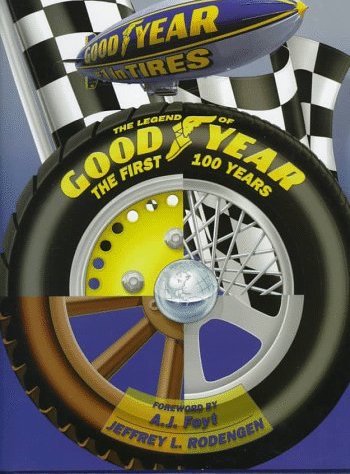 The Legend of Goodyear, The First 100 Years was published upon the occasion of Goodyear achieving its 100th anniversary and, from the extensive list of names in the Acknowledgements, it’s obvious the author Jeffrey L. Rodengen had the full cooperation of the company and access to its executives, current and past, as well as to its archives. Rodengen was even then a seasoned writer specializing in corporate histories. Legend of Goodyear was his 24th book—and he’s still writing and producing such titles into the 2020s.

Rodengen opens his Goodyear story half-a-dozen years prior to the company being established so he can write about that vulcanization process Charles Goodyear developed. This book is very much populated with people important to the company in a myriad of roles including surviving the mid-1980s attempted corporate takeover. Simply put, The Legend of Goodyear, The First 100 Years is well-written and -illustrated making it an excellent attention-holding read. 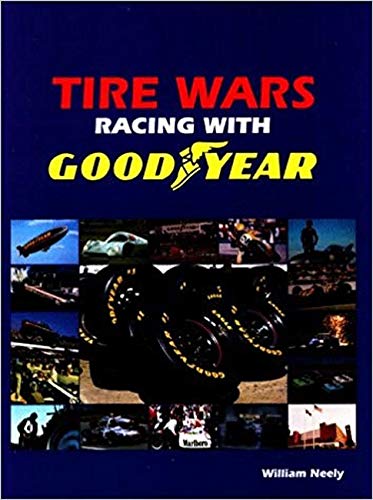 Tire Wars, Racing with Goodyear is truly a who’s who of race car drivers, race series, and types of racing machines as it is tightly focused on just one aspect of Goodyear’s business: motorsports. It all began in 1901 when Goodyear gave Henry Ford tires for his 999 racecar prior to him becoming victorious on Detroit Driving Club’s oval. Barney Oldfield noticed and ran his races on Goodyears.

That story continues to this day, well beyond this Tire Wars book’s 1993 publication. It was written by one-time Goodyear’s racing public relations head turned motorsports writer, Bill Neely, thus giving it authority to what it imparts on its pages. Generously illustrated it also includes technical details of tire construction as it had been developed over the decades.

Each book tells its story well. Taken together they complement one another making a more complete story. Yet as Goodyear is still very much a vibrant, large and producing company, there’s every hope that still another book or two will come along to bring the Goodyear story into this 21st century.

In order of publication date – newest to oldest:

The Legend of Goodyear, The First 100 Years

Posted Under: Technology | Author: Helen Hutchings | No comments yet