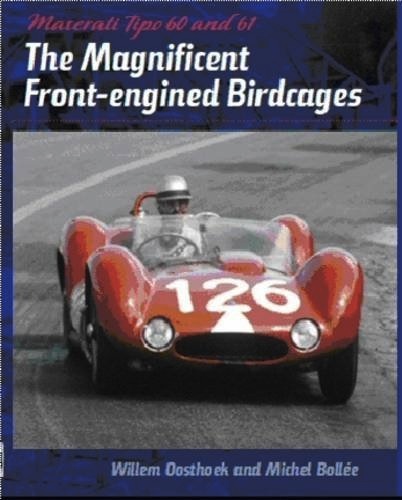 by Willem Oosthoek and Michel Bollée

The Tipo 60 and 61 Maseratis, universally known as “Birdcage” for their space frame of small diameter tubing, were the last of the great front-engined sports racing cars. In this beautifully produced new volume from Dalton Watson, Trident authorities Oosthoek and Bollée treat the Birdcages with the same thoroughness that made their previous volumes on the 450S and Tipo 151 Maseratis benchmarks for information on those models.

Introduced in 1959, the two-liter Tipo 60 lacked the lovely flowing lines of the 300 and 450S models that preceded the Birdcage, but the nimble lightweight was a winner from its first race at Rouen in the hands of Stirling Moss. The 2.9-liter Tipo 61 became the weapon of choice for American customers, and 17 of the 22 chassis produced would have the larger engine. Quite successful in hillclimbs and short races, the cars did prove a bit fragile for European endurance racing, with Lucky Casner’s CAMORADI team victories in the Nürburgring 1000 km event two years running notable exceptions. In North America, however, the Birdcages were a major force in the hands of the best including Carroll Shelby, Jim Hall, Dan Gurney, Roger Penske, Bill Krause, and Walt Hansgen. Every race with a Birdcage entry is covered chronologically for the years through 1963, with additional data for 1964-1967 when the Maseratis were no longer competitive.

By 1965, as the rear-engined revolution gained momentum, the Birdcage was just a used car as witnessed by the advertisement Don Skogmo placed offering chassis 2454: “Maserati Birdcage Tipo 61. Car completely gone through, no time on engine or transmission. This is a 3-liter D-mod car equipped with the most fantastic brakes ever produced on a race car. Offered for sale with a truckload of spares including a head, cams, Webers, many new wheels, tires, and engine and transmission parts too numerous to list. $2300 takes all.”

If we had only known that the vintage and historic racing scene was about to take off, with values rising toward the stratosphere.

In part three of the book the ownership, competition and post competition history of each chassis is described, with its condition, originality of components, and historic race appearances listed to date. There is also a listing of every individual who drove a Birdcage during the years of competition, as well as indices of chassis numbers and the names of individuals involved.

This book will inevitably be compared to Joel Finn’s Maserati Birdcage (Osprey, 1980), still worth seeking out for its detailed photos of the cars’ construction, factory specification sheets and dynamometer curves, plus reprints of contemporary road and track tests. The new volume by Oosthoek and Bollée, in addition to bringing the individual histories up to date, provides more complete information on the lesser known European events. The new book also adds much more to what we know of those who purchased the cars; Joe Lubin, Frank Harrison, Jack Hinkle, E.D. Martin, and the charismatic Lucky Casner, who kept his last Birdcage for two years and nine races before Maserati took it back for nonpayment of the purchase price.

Photo reproduction, as with all Dalton Watson offerings, is first rate with many of the hundreds of images in color. The Magnificent Front-engined Birdcages is a trip down memory lane for those of us who saw the cars in action, and a valuable reference tool for any student of the era.

The Industrial Revolutionaries: The Making of the Modern World, 1776–1914 »
« Chicago Stations & Trains