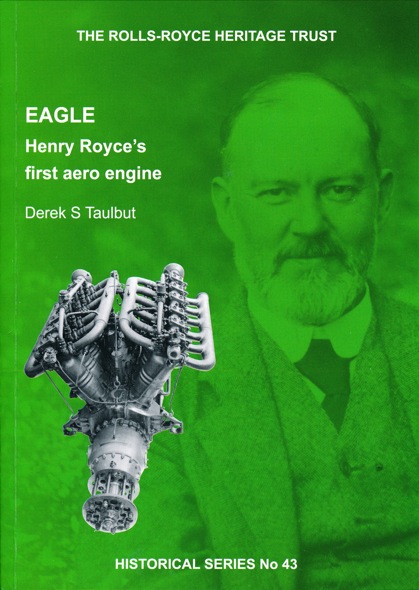 This excellent book details the development process of Rolls-Royce’s World War One V-12 aircraft engine, the Eagle. The design process started with the declaration of war in August 1914, and development of the engine continued after the first running flight-worthy engines were delivered to the Royal Naval Air Service in October 1915. Although the engine was complex and difficult to produce in mass quantities, it was extremely powerful and reliable in an age of slap-dash mechanical design.

Originally specified to deliver 200 hp, the first engine exceeded that by 25 hp on test, and by 1917 the Eagle VIII increased that to 360 hp (with more possible if high-octane benzene fuel was used in place of the 40 octane then commonly available) while costing 38% less than the original in terms of price per hp!

The arrangement of the text in this book requires the reader to constantly reposition two bookmarks: one for the body copy, and one for the 38 lengthy Notes listed in a 62-page section toward the back of the book. The notes are invaluable, so much so, that they probably should have been worked into the text, or at least been put on the same page on which they are called out, to simplify the reading process. However, regardless of the layout, the information is beautifully presented in clear and easily readable form that most technical volumes like this fail to achieve. Modern engineers can smile and nod with appreciation as they follow the successful transformation of Henry Royce’s imagination into reality through a methodical trial-and-error process backed with performance data. Royce insisted on testing to destruction to learn where mechanical weak points existed, then strengthened the failed parts before again running the engine to destruction. This process created an engine that was far more reliable than anything the Germans, French, or Americans produced. The minimizing of engine field maintenance played a major role in Britain’s ability to use fewer planes that could fly more often. This same philosophy later allowed the Rolls-Royce Merlin engine of World War Two to keep fighter planes in the air instead of being overhauled and out of action.

A quick list of the areas of improvement—covered in detail with appropriate photos, drawings and text—include crankshaft, con rods, pistons, bearings, crankcase, cylinders, valves and springs, camshafts and rockers, subsidiary drives, general systems and a very clever propeller shaft planetary reduction gear. Fuel and combustion analysis, aluminum piston development, primary and secondary vibrations, crankshaft balancing and dozens of other areas are carefully examined and the information obtained applied to the development of the engine.

For the automotive reader there are a number of relevant connections, especially to Renault and Rolls-Royce’s own Silver Ghost, also to Mercedes although the key technology in this context—welded steel cylinders—are derived from aero sources, not the 1914 GP car as has been erroneously reported for decades by practically every book on the subject. (In fact it is Taulbut who, in other research, retired that particular herring which had been introduced into the record by WO Bentley’s first-hand but nonetheless faulty recollection.)

The book opens with the Contents page and progresses through a Foreword, Acknowledgements, Introduction, three comprehensive chapters on the design process, a section on Royce’s engineering philosophy, Conclusions, Epilogue, a listing of the major events between first service to first installation, a Table of Specifications, Performance Analysis and two Appendices (one containing the 62-page Notes section previously mentioned), a List of Figures, and a General Index (a rarity in RRHT publications!), which is weak in comparison to the rest of the book. In addition to the photos there are 53 performance/data charts, 21 blueprints, 13 drawings, and 14 facsimiles of various paperwork.

This carefully researched book is like a magical view into the past, exposing the street-wise genius of Henry Royce. Although born in 1863 and untrained with the exception of a year’s worth of evening classes at London City & Guilds Finsbury Technical College in 1881–1882, Royce was able to create electrical and mechanical machinery based on an almost visionary ability to sense what would work and what would not. Royce also had around him two draftsmen, Albert Elliot and Maurice Olley (both eventually rose to high rank within the UK and US auto industries), who quickly turned his concepts into detailed blueprints. At the Rolls-Royce factory, highly trained and talented men turned those blueprints into working prototypes that rapidly, through carefully monitored testing, became production-ready.

No man stands alone in the modern development process, but some men have the power to accumulate talent around themselves that magnify their abilities beyond the norm. Henry Royce was such a man. Modest, sometimes sickly, but hard as nails in his determination, and driven to always strive for the unobtainable: perfection.