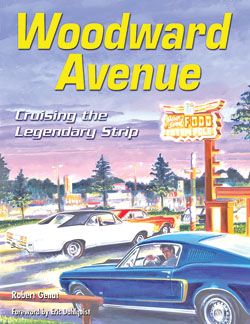 To anyone who has an affinity for car and youth culture in America, Detroit’s Woodward Avenue is an iconic name when it comes to cruising and street racing. “Detroit” is hardly synonymous with “hotbed of culture” and what happened on Woodward Ave. happened in a thousand other places but having the Big Three as neighbors made Detroit a car-centric town if ever there was one. To those who know Woodward first-hand, as participants or spectators, it remains a phenomenon. Nowadays, the Woodward Dream Cruise is probably the largest auto show on Earth—40,000 cars and over a million fans from all over the world gather the third Saturday each August on 16 miles of asphalt to watch cars go by.

“Column shifters were not cool in an era of performance floor shifters. Those who had such a car tried their best to get the car into first gear with the column lever out of sight before they entered the drive-in. Then they would lean slightly forward and to the right as they drove through, pretending they had a floor shift.”

Known as M1 since 1970 and declared a National Scenic Byway in 2002, the first speeding ticket issued on Woodward Ave. dates back to 1895—and the road wasn’t even paved then! That would happen in 1909, making Woodward the first concrete-paved road in the US, even if the paved section was all of one mile long. (It wasn’t until 1916–19 that another 27 miles of pavement were added.)

The Dream Cruise started in 1995 as a fundraiser for a soccer field. 25,000 people were expected, 250,000 came. Genat was there and has attended all but one since then. But more importantly, he is a native Detroiter and was old enough to drive at just the time when Woodward and the cruising era were in their heyday. Now in his sixties and an award-winning author/photographer (transportation, military) and still a gearhead, Genat pays tribute to that time with this book. Those of the people he writes about that are still alive have embraced his book and richly contributed to it. And while it does strike a certain tone of small-towny familiarity, the writing is so engaging that it will draw in even readers who weren’t there then.

The book is based on many interviews and the author’s own recollections. The Foreword by former Hot Rod magazine technical editor Eric Dahlquist sets just the right scene by describing a covert operation of him and two Chrysler execs sneaking the first 426 Street Hemi onto Woodward one night in 1965 to test its mettle and gauge the public’s reaction. After a fine Introduction that speaks to Woodward’s allure and his first car, a 1957 Chevy Bel Air hardtop, Genat explains racing technique and etiquette. Even cruising required technique (see the quote above) and certainly was an exercise in etiquette. If you saw the movie American Graffiti you will recall that when “cruising” turns into “street racing,” it can take many forms, from civilized streetlight-to-streetlight sprints in dad’s Super Stock to all-out purpose-built trick machinery whose drivers race for coin. The really hard-core racers will probably find this book a bit light but then that is just not the crowd with which Genat ran.

It is informative to absorb Genat’s nuanced descriptions of the “coolness quotient” of cars of the time in the context of today’s often indiscriminately high auction prices. He also describes the drive-ins, restaurants, speed shops, car dealerships, and other car-related businesses that lined Woodward, as well as the people (demographics, disposable income etc.) that frequented them. A separate chapter covers muscle cars then and now. Even car radios, radio stations, popular music, and DJs are discussed, and a final chapter looks at the modern Dream Cruise.

The book is extensively illustrated, intermingling period and modern photos (not all are credited) and includes paraphernalia such as advertisements, flyers, and even a traffic citation. The Index is short and only lists people, locations, and publications.