Once Upon a Time in Hollywood, A Novel 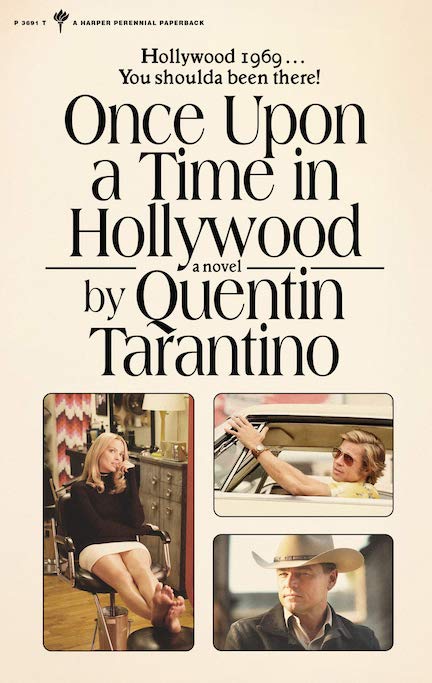 It is a good chance that only fervent Tarantino fans will consider purchasing this book. Face it: his movies are not everyone’s shot of rye. But hear us out.

In book form, the extravagances inherent in Tarantino’s movies become muted, easier to digest. The story is a slice of the life of the TV Western actor Rick Dalton, whose better days, in movies and TV, are fading quickly—and abound with bruised ego, self-doubt, worry, anger, hope, loyalty, disloyalty, friendship, desire, and alcohol. Only Rick and a handful (perhaps only two?) of the book’s many characters are fiction; the novel is peopled with dozens if not hundreds of movie folk and hip-sixties Los Angeles denizens, either as part of the story or mentioned in reminiscences: Sharon Tate, Charles Manson, Dennis Wilson, Lynette Fromme, Roman Polanski, Don Steele, Jay Sebring, Elke Sommer, Tina Louise, Dean Martin, Mama Cass, Caroll Baker, Steve McQueen, et al. Those known to most, and those known only to hardcore movie geeks. We also get a dose of 8-Track tapes, AM radio disk jockeys, pre-streaming TV networks and a Volkswagen Karmann Ghia. Still stuck in the sixties? Love watching Ted Turner Classics? You will love this book, an overflowing fountain of resounding Hollywood minutia. Tarantino: the ultimate movie buff. Funny how the word “pulp” keeps popping up throughout the novel.

In the movie Once Upon a Time (expect a fairytale of sorts), an integral subplot deals with the Bianca/Tate murders—with a surprising twist; the book also offers a glimpse into the Manson cult, the Manson crimes, but it differs from the film. No spoiling here. The last page of the book is an advertisement: “Want more Rick and Cliff? ‘ONCE UPON A TIME IN HOLLYWOOD’ The Deluxe Hardcover Edition . . . Coming to a bookstore near you.” Looks like there’s some more twists and turns ahead, not too dusty, along that long, lonesome Western trail. Git along.

Once Upon a Time in Hollywood, A Novel

Posted Under: Fiction, Movies | Author: Bill Wolf | No comments yet