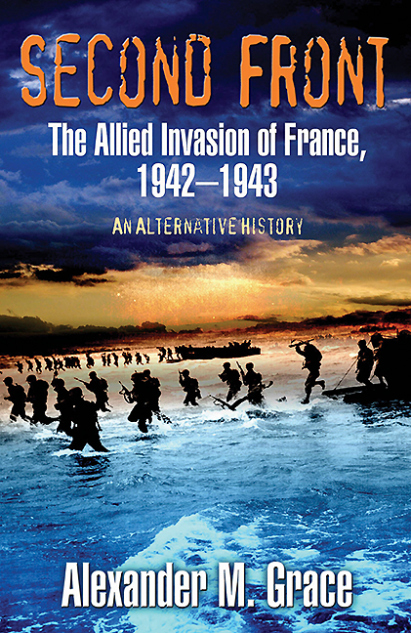 “That, of course, is the essence of alternative history, the acting out of some of the great ‘whatifs’ of the past. In this work I have done considerable research into the forces available to all belligerents in late 1942. I have also made a conscious effort to avoid 20-20 hindsight and limited the actors’ knowledge to what was known at the time. The book is written in every way as if it were a history compiled after the supposed events described herein…”

With the 70th anniversary of D Day fresh on readers’ minds one might as well ponder an alternate course of events to the one that has come to be thought of as having changed the course of WW II—the 1944 Allied landing in Normandy. It did, but that doesn’t mean another couldn’t have done the same, maybe sooner, maybe better. And D Day, effective as it was, did come at a high cost.

If WW II is too “ancient” for your taste, look into today’s papers. Syria, Ukraine, Somalia, your favorite hotspot __here__. Today’s choices cast the die for the future. Different choices—different future.

One byproduct, and not the least, of our forefathers’ thinking about D Day is the Cold War. How’s that, you wonder? Consider the title of the book; it pertains to the “first” front, the one where Germany pinned down Russian forces at the borders to their homeland, with staggering losses on both sides. Had the Western Allies then and there created a second front, bringing pressure to bear on an already severely stretched German force, it could have been a tipping point in the war. Also, it would have shown the Russians that the Western Allies were allies indeed, thereby preventing or reducing the mistrust between the sides that would ultimately result in the hardening of positions, the drawing of lines, the checkmate that would become the Cold War that dragged on and on and on, spawning new conflicts all over the place. Vietnam, China, Korea, the Space Race, your favorite hotspot __here__.

Long story short: history matters, choices matter, understanding options is vital. These days the US is widely blamed for taking too long to think, too long to commit, thereby raising the stakes. On the other hand, the previous administration’s swagger also raised the stakes, came at a high cost and, worse, had no definitive result that justified it all. Talking heads and Monday morning quarterbacks have all the answers, or at least they make all the necessary noises. That is not this book!

The introductory quote, above, shows that the author is completely aware of the pitfalls of projecting from the present into the past: of course xyz was the thing to do! Grace has instead attempted to time-travel: to look at the past as it unfolded then and there, to look at the world with what was known then and there, to not let his knowledge of the present inform and thereby prejudice his analysis of the past. He has, to the extent that such a lofty goal is attainable by a human mind that is not suffering from a personality disorder, succeeded.

Let him take you to 1941/42, the time the French Vichy regime looked at two options: [1] let’s not antagonize the German occupiers by taking up arms which would provoke them into hurting us even more, [2] let’s believe the British and the Americans that if we actively join in the fight they will decisively and lastingly support us, definitively defeating the Germans so that they cannot come back and retaliate. In the latter scenario, the Allies would have landed troops in proper secure French ports, probably on a sunny afternoon and without being shot to pieces, then established proper secure supply lines whereby avoiding the great downside that in all objectivity taints the success of D Day.

Watch, as the author himself did and which motivated him to write this book, the bloody landings on Omaha Beach in the movie Saving Private Ryan. If you have no direct experience of noise and smoke and trauma and destruction and death, that opening half hour that puts the viewer right there on the beach will be plenty scary. The real thing is incomparably worse, and it is crucial to remember this. Earlier in the review a chess term was used. A chess player, in the comfort of his armchair and without the distraction of a gun trained on him, can spin out options in his head ad nauseam. A warfighter accepts—and this is, admittedly, a vast generalization—that there is a time for thinking and a time for doing. Once engaged in the doing, once a course of action is committed to, everyone up and down the line has to execute the same play without ifs and buts. In simplistic terms, [a] any action is better than none and [b] waffling, i.e. repeated re-thinks result in self-defeating paralysis at best and incalculable chaos at worst.

Grace is neither a professional historian nor a professional non-fiction writer but he is a professor and a former Foreign Service officer (and novelist). The case he invites the reader to examine here is plausibly presented, well articulated, sound in terms of methodology and, ultimately, disturbing because it does look so promising. Of all the players, Churchill would probably have the most to answer for.

The book deserves to be read with serious intent and rapt attention!