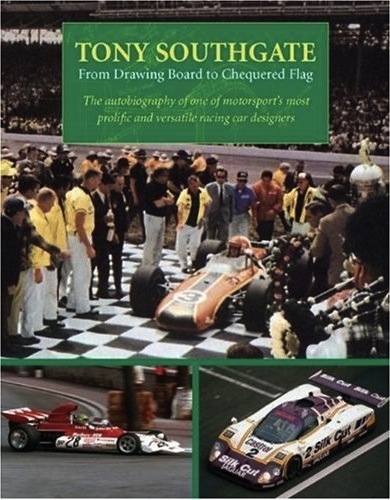 For someone who first started to be interested in motor racing in 1982, Tony Southgate was consistently present in the background of the races I watched. It helped of course that he was associated with underdogs at that stage; teams like Theodore and Osella were never going to win anything, but with the latter in particular, they were doing something different, and that appealed to me. There was also the real attraction of an attempt to do something with extraordinarily limited resources, which is an ethos that appeals to this day.

“From a few—quite a few!—drawings on pieces of paper would ultimately evolve a creation that people could see, touch, hear, and even drive. And many magic moments would always happen along the way.”

In this light, Southgate’s autobiography has been a long time coming, and it doesn’t disappoint. Told in a concise and to-the-point manner, the true richness of Southgate’s 38-year career as a racecar designer, which has involved winning the Indianapolis 500 with Eagle, the Monaco Grand Prix with BRM, and Le Mans with Jaguar and Audi, is revealed.

This is a story that strips away a lot of the glamour that is often associated with motor racing. The tooth-and-claw nature of the sport in the 1960s and 1970s, when death was a common occurrence, is exposed, and so too is the gritty, unrewarded hard graft that working in the industry entailed. The frankly unpleasant birth of the Arrows team was before my day, but this is told clearly by one of the participants who has managed to lose a lot of the rancor with the perspective of distance. Back in the 1980s, Southgate would refuse to refer to Arrows, instead calling it Arrow (the team name was made up of the letters of the founders Alan Rees, Jackie Oliver, Dave Wass, and Tony Southgate), feeling he wanted nothing to do with them. Reading now of his abrupt dismissal and the borderline fraud that valued his 10% of the company at a mere £5,000 you can understand the level of bitterness he felt, especially when put in the context of the court battle with Shadow and the supreme efforts in producing a string of cars in Arrows’ early years.

The core message here is that while there’s a lot of money sloshing around the sport, it says something that Southgate had to work all the way to 2000 to ensure financial security. This is the story of a career, where, as he put it, “I had always been paid well, but there is a difference between living well and having excess money to save for a rainy day.” (p. 170). You do however wonder if Southgate would have wanted it any different way? He’s clear that the excesses of motorsport hold no appeal to him, and in being compelled to work later into his career he got the opportunity to work on some marvelous machinery and make him a figure who neatly spans the era when an individual could have an impact on every aspect of car design to the present, when the complexity of design means the cars are now inherently designed by committee.

As well as being a genuinely good read, right up there with recent classics from Vic Elford and John Horsman, this book offers the student of motor racing some real new insights. For instance, in 1982 then Osella designer Herve Guilpin quit in disgust at the Caesar’s Palace Grand Prix, being fulsome in his criticism of Enzo Osella’s approach, including choice words such as “The reason is always lack of money. The result is the FA1D [Osella’s 1982 car] and it always has been a potential public menace” and questions about resource allocation, such as questioning the building of a test track at the Osella factory. (For those who want to know more, the full story is told on page 45 in the 1982 Caesar’s Palace edition of Grand Prix International magazine.)

Tony Southgate brings a different perspective. When he visited the Osella facility at Volpiano to discuss the project for fitting an Alfa Romeo V12 engine to the FA1E, not long after Guilpin’s outburst, he was clearly pleasantly surprised. Summing it up he states, “Compared with the likes of Arrows and Shadow, Osella looked very impressive. Where teams allocate their money is always a case of individual priorities, and in Osella’s case he obviously spent a lot of it on the factory.” (p. 126). Different observers, different perspectives, and different circumstances, but it all clearly illustrates that even primary sources can be so contradictory as to make it difficult for outsiders (in other words, us) to know what’s what.

The book is extensively illustrated, mostly with photos of cars on the track. Being a book by a designer, there are of course—and thankfully—quite a few cutaways and CAD drawings, both by Southgate and by others. Appended are lists of all the cars he designed (about 50) or worked on (about 25). The thorough Index is divided into cars/engines, circuits/races, clubs/classes, companies/components, places, and teams.

The book is beautifully put together and tells a fascinating story. It deserves to be read by anyone with a real passion and interest in motor racing in the latter part of the 20th century.